While we make a living from the sales and rental arcade cabinets and other amusements, we can’t help but recognize the incredible efforts that are sometimes put into custom projects. This time around, we want to take a brief moment to recognize the genius that is High Scores Arcade. The husband-and-wife run family entertainment center and retro arcade museum opened their doors at a time when the prospect of a classic FEC was shoddy, at best. However, not content with only going through the motions, they also dedicate themselves to designing some of the most awesome, unique arcade cabinets for their customers to experience. 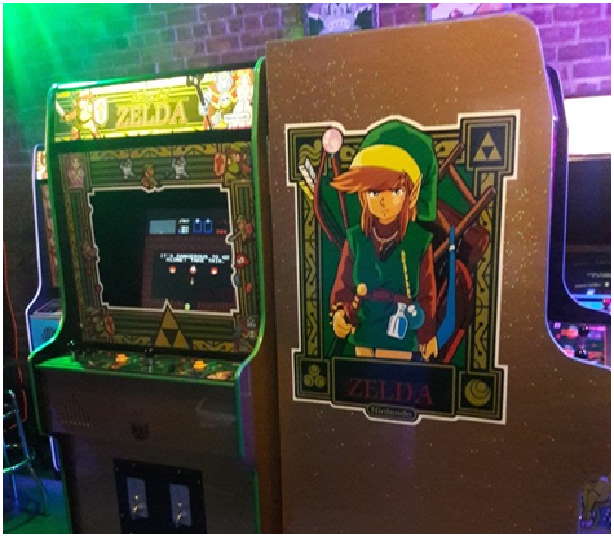 In the past, the folks at High Score designed and released a couple of custom cabinets for  popular retro games such as The Legend of Zelda(pictured above), and the Oregon Trail. These machines featured a fully-functional version of their respective games alongside some truly unique and inspiring cabinet designs. Furthermore, they also feature a fully-function port of the controls to their arcade equivalent, with the appropriate buttons, only using a stick instead of a d-pad for movement, at least in the case of the Zelda cabinet.

However, this time around, High Score Arcade outdid themselves once again by presenting us with a custom-built arcade cabinet for the hit party game Super Smash Bros. Melee. And with the announcement of the Hero from Dragon Quest and Banjo-Kazooie characters coming to Smash Ultimate, what better time to talk about this?

For those who don’t know, Super Smash Bros. is an immensely popular series of fighting/party games that started off in the Nintendo 64, with its first title simply named “Super Smash Bros.” The first installment was released in 1999 and pit some of Nintendo’s most popular characters against each other in a fight to the death.

The reason as to why it’s considered a party game by some is because Super Smash diverges from the traditional fighting game formula. While the combatants face off in several 2D environments like in other fighting games, they all have free range movements coupled with several mobility skills such as free dashing, double jumping, and other attacks. Up to 4 players could pick a controller and play, competing either in free-for-all brawls or team fights. Furthermore, the stages are quite varied and feature unique hazards and exciting cameos from supporting characters in other Nintendo games.

Suffice to say, the game received critical acclaim both for its brilliant concept as well as flawless execution. To date, the series still has a massive competitive scene and is featured in some of the largest tournaments in existence, including EVO. However despite its humble beginnings in the first game, which featured a playable roster of 12 characters, the latest iteration of Smash, Super Smash Bros. Ultimate on the Switch, features a whopping 76 characters, with at least 4 more coming as DLC in the future.

It goes without saying that this game is incredibly popular, which is why High Score Arcade’s custom-built cabinet is a truly apt homage to such a huge franchise.

Their custom cabinet is based upon Super Smash Bros. Melee, the version of the game released originally on the Nintendo Gamecube in 2001. This game more than doubled the playable roster of its predecessor with a total of 26 characters. The cabinet in question was finished in June 6, 2019 and, according to the press release, offers lots of features to bring the fun of the original game to the arcade. This starts with the use of a 27” CRT, guaranteeing the fastest possible play (and the kind of monitor that the game was originally created for).

Of particular note is the design of the control panel. In contrast with the other custom cabinets commissioned by the FEC, the Smash Bros. cabinet was engineered to, instead of featuring arcade controls, it has four slots on the panel, which are used to house up to 4 Gamecube controllers. These controllers have, for the longest time, been known by professional gamers as the devices of choice for playing the game, so the decision to use them in the cabinet was a smart one by the designers.

The cabinet itself is very elegant, featuring custom design artwork by Sam Bahman of Rewind by Design, which consists of a late ‘80s take on the classic Nintendo characters adorning every panel. The speakers are backlit with LED lights and have the Smash logo emblazoned on the grills. Lastly, the cabinet sports a finish with automotive paint to achieve that characteristic shine.

But don’t take our word for it, take a look at these pictures from the finished product: 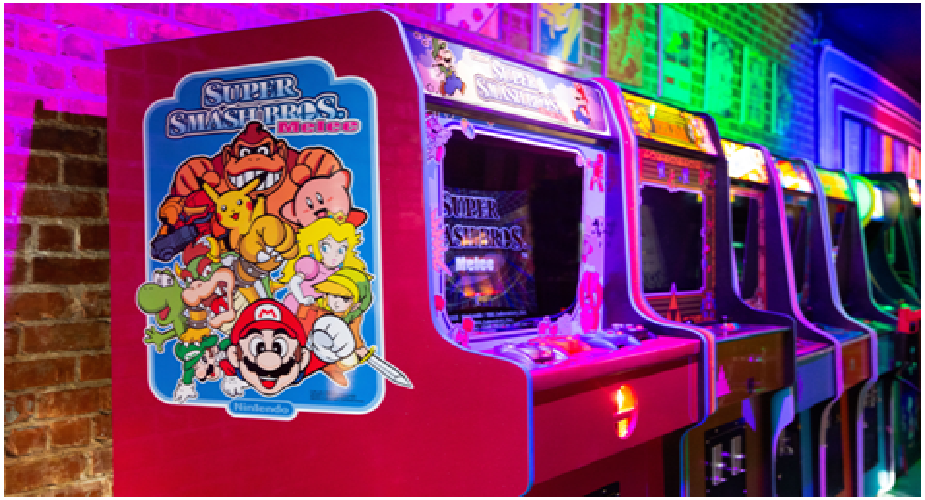 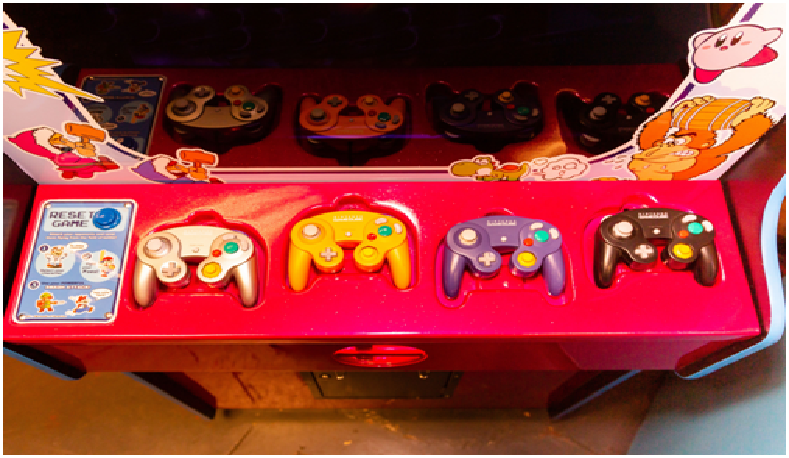 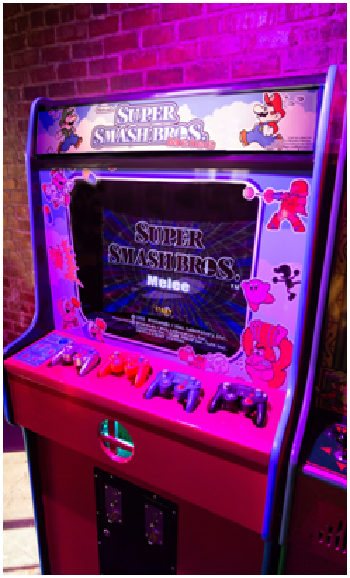 In an excerpt of the press release issued by the company, the folks at High Score Arcade said the following:

“Smash Bros. has a 20-year history, which comes with one of the largest and most dedicated fanbases in video games today.  The franchise was recently reinvigorated with the release of the wildly popular Super Smash Bros.Ultimate for the Nintendo Switch, selling 13.8 million units in its first four months since release.  Still, Super Smash Bros. Melee, released in 2001, remains one of the top competed-on versions ever created and a fan favorite, which is why the High Scores team has chosen to honor the title with its own arcade release.”

Furthermore, regarding Super Smash Bros. Melee, they said, “SSBM is a beautiful, energized Nintendo spectacle of chaos and control and it always belonged in the arcade! There’s no better controller to play it on than the one from the original GameCube. We knew our biggest challenge in the design was going to be making those two truths complement instead of contradict each other.”

If you’re interested in learning more about this awesome project, swing by their website by clicking on this link.