If you thought the golden era of plug ‘n play consoles was long gone, then guess again! Some companies experimented with these non-cartridge, pre-loaded consoles to a degree back in the 90’s, with the fever culminating with consoles like the AtGames “Flashback” series of Atari & Sega consoles, Sony’s PlayStation Classic and the most popular of them all, Nintendo’s NES Classic.

The great thing about these products is that all you have to do is plug them into your TV and connect power and you could start to play. No cartridges or ROM configurations to worry about, and generally you can use the original controllers with them too. The quality of said devices has often left much to be desired, however. Since they are glorified emulation boxes, often the emulation was off on the graphics or the sound; sometimes the selection of included games would also leave fans scratching their heads. Overseas, such consoles came around in a variety of bizarre knock-offs and bootlegs, often including a giant number of poorly coded bootlegs and games you didn’t really want to play. Nevertheless, these devices made for amazing birthday presents since they were cheap and came packed with tons of games, much like the infamous “brick game” or Tiger Electronics devices.

With all of the major names creating their own iterations of said consoles, and Nintendo coming out on top with big sales on the NES & SNES Classic, another name has surprisingly thrown their hat into the ring of the plug-n-play gaming device: Capcom. Behold, the Capcom Home Arcade:

The Capcom Home Arcade is, quite simply, a plug ‘n play console, albeit possibly one of the best plug ‘n play consoles, to date. Given that the company never released a home console of their own, instead developing hardware and making a name for themselves in arcades, the console is a uniquely designed arcade stick. In the company’s reveal, we saw that the device consisted of a large slab in the shape of the company logo, with two sets of controls on each side so that up to two players can join in on the fun. The console itself looks really nice, with an attractive glossy finish that highlights the quality of its build.

On the back, you can spot two ports: The HDMI slot, and the USB power slot. The video output method suggests that, while the console is packed with some timeless classics from the ‘80s and ‘90s, they’ll look amazing on any modern display. Furthermore, the USB power slot is convenient since you can hook up this device directly into the USB port of your TV. Alternatively, if your TV has all its ports occupied—or doesn’t have any, at all—you can simply plug it into a wall outlet using an adapter. Lastly, we can find the WiFi antenna on the rightmost edge of the back panel, through which the console can connect to the internet for the purpose of uploading high scores and consulting leaderboards. We’re not sure if players will be able to download additional games in the future but, given the absence of any storage specifications, or the possibility to upgrade its storage, this isn’t likely. However, the games included in the console are likely only a few megabytes in size each, so there might still be hope for downloadable titles after its launch. 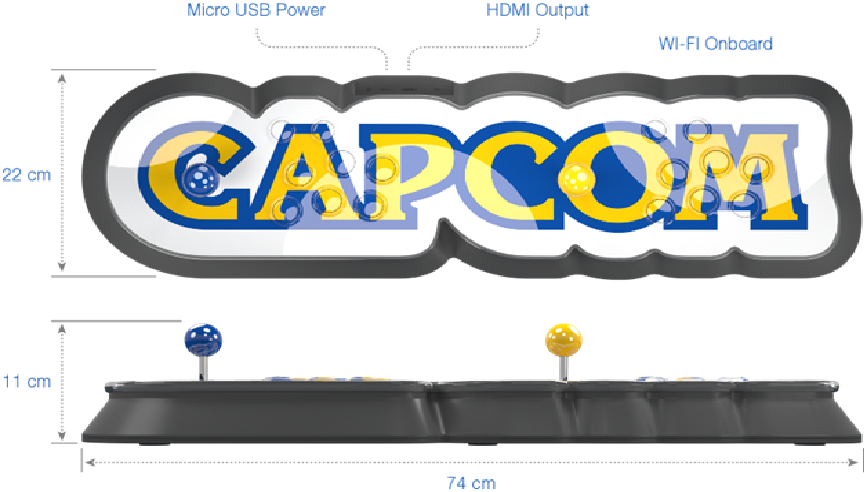 The controls consist of high-quality components, including Sanwa JLF-TP-8YT sticks with 8-way movement, and 16 OBSM buttons—8 per player. For those that aren’t very arcade-savvy, these components are the ones still used in many high-profile arcade cabinets, meaning that they are built to last and withstand all kinds of punishment. As such, the controls should last as long as they do with the highest quality home arcade sticks, meaning few, if any, issues for the buyer to worry about.

The console comes with 16 preinstalled games right out of the box. According to Capcom, they are emulated using the original CPS1 and CPS2 arcade ROMs, with emulation provided by a third party, FB Alpha. The games are designed to recreate the original arcade feel but adapted for modern displays. Some of the titles installed in the Capcom Home Arcade include 1944, Alien vs Predator, Armored Warriors, Ghouls ‘n Ghosts, Street Fighter II, Strider, Giga Wing, and Final Fight, to name a few. The console offers a mix of fighters, adventure, platformer, shoot ‘em ups and other genres that predominated at the time, and that still stand the test of time.

The Capcom Home Arcade is scheduled to launch late October this year, though you can already preorder yours from the Capcom Store. Stick around if you want to read more about this exciting project, as we’ll be posting more information as the development unfolds.