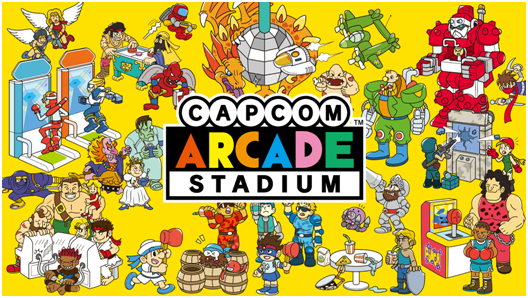 Arcade compilations and ports are nothing new; They’ve been around for about as long as home consoles have existed. Some of these popular games even make into those off-brand 9999-in-1 handheld devices, which is a testament to the games’ popularity. However, some of these ports and compilations get more effort put into them than others, especially the ones that are officially developed by the original creators, as remasters of sorts, and Capcom’s upcoming compilation is a great example of this.

The Capcom Arcade Stadium collection is an upcoming release for the Nintendo Switch, which will offer up to 32 classic arcade titles, updated to look and run perfectly on both the handheld device as well as on modern displays. The Switch has progressively become a platform not only for awesome original AAA and indie titles, but also for ports and updated versions of older titles, with the “Arcade Archives” series being one of the most prevalent in this category, allowing players to enjoy retro games from the good ol’ days of dark rooms filled with glowing monitors and beep and boops.

However, while the Arcade Archives series is great for when you have a hankering for a specific title, the fun it offers is fairly limited, at least in terms of variety. On the flipside, the Capcom Arcade Stadium is offering 32 classic games, including some awesome hits like 1943 – The Battle of Midway, 19XX – The War Against Destiny, Super Street Fighter II Turbo, Cyberbots, Powered Gear, and Battle Circuit, among many others.

And the best part is that the game will be free to download from the Nintendo Eshop once it releases… but with a catch.

Initially, Capcom Arcade Stadium will only include 1943 – The Battle of Midway for free, and the rest of the games will come as purchasable DLC, in the form of packs with multiple titles. There will be three packs in titles, divided into the different eras of Capcom’s journey through the world of arcade gaming:

All of these titles will feature, as mentioned above, support for modern displays, as well as many useful features such as save states, rewind, and support for up to 2 players in compatible games. Moreover, it’ll also feature a variety of filters and graphical options to tinker with the visuals of the game, including adding CRT scanlines to get that retro feel, even on your modern 55” 4K UHD beast.

Capcom Arcade Stadium will launch on the Nintendo Eshop for the Switch in February 2021.