With its significant presence in the gaming industry over the past few decades, the arcade variant of video games has certainly received hundreds, if not thousands of worthy titles under its belt. This huge variety of options at the hands of the users can seem intimidating to some, especially the newcomers to this magnificent world that wish to start a collection or open their very first arcade business with the best games, but are completely stumped about which titles to start with.

Speaking of which; despite arcade’s decline due to the dominance of console and PC gaming, starting your very own arcade gaming business is still a sound investment. Did you know that, from 2006 to 2010, the revenues from the sales of coin-operated arcade video games in the United States amounted to $868.6 million? While this is not much compared to the video game industry’s revenues as a whole ($91.8 billion in 2015), there’s still quite a lot of money to be had. Of course, in order to grab a slice from the profit cake, you need to actually know what you’re doing. This translates to conditioning your arcade with the right machines, and the perfect theme to lure potential customers through the doors, and onto your machines; providing you with plenty of income for your troubles.

However, the truth about furnishing and equipping your business is that, depending on what you want to give your customers on their first time spending an afternoon at the arcade, your choices of games are actually as broad as the I-95 on a quiet Sunday morning. This fact is especially important, considering that the enjoyment obtained from playing on an arcade machine is completely dependent on whether the users actually like what they’re playing (duh!). Most customers that don’t enjoy their time at an arcade is usually because they went in blind, sinking quarters into the first machines they could find, only to be thoroughly disappointed when the games don’t tickle their fancy. This fact should be kept in mind at all times, as the games are the main reason clients would want to go to an arcade, and if they don’t enjoy it the first time around, then odds are they won’t be coming back.

This article is created with the intention of helping newcomers to the world of arcades that want to get started with their own business, to do so in the smoothest way possible. The main idea is to create a place with the right machines so that they can provide the most enjoyment to the most amount of users on their first visit, and have them coming back for more. In this first part, we’ll be addressing the different types of machines that can be usually found in any arcade establishment.

This is the staple of modern arcade establishments. The video arcade machines have been around since the early 70’s and cater to a wide variety of gamers by including software in multiple genres. These games are usually 100% digital, where the players use the provided instruments (joystick and buttons) to take control of a virtual character. In this category you can find all types of machines, from the most popular fighting games like Street Fighter IV and Mortal Kombat IX, popular beat em’ ups like Final Fight and Turtles in Time, and even the classics, like Frogger, Pac-Man, and Galaga. 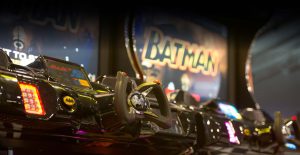 This is by far the most popular type of machine currently, often attracting crowds of gamers that either want to beat the champ’s high score, or simply want to have fun beating each of the stage’s bosses. This category is ideal for those that want to challenge themselves with the games’ obstacles, without much regard for leaving a high-score for everyone to see.

Pinball machines have been synonymous with arcade establishments since times immemorial. Although they have been falling out of fashion with modern gamers, these amusements still boast a sizeable fandom that borders on cult following.

Unlike the video arcade machines mentioned above, pinball machines can be either 100% mechanical, or a hybrid with both mechanical and digital components. Regardless of the type however, the controls used to manipulate the machine’s flippers are usually mechanical. And, even though game developers are still creating Pinball machines out of every theme imaginable, the gameplay always boils down to skillfully operating the flippers.

Despite pinball being around since the 50’s, they started to gain increased fame through the late 60’s and early 70’s. Like the old days of Atari gaming, the main point of these games is to get the highest score possible, so that nobody else in the arcade can beat it. This category of games is for people who want to prove that they’re the best around, and back up that claim with a colossal high-score on their favorite pinball machine.

Some say that a game without a payoff is a glorified form of virtual slavery. While we personally don’t agree with this concept, we understand that some users like to have the option of earning prizes with all their efforts and skills. Ticket redemption games are those that can depend on either skill or luck, and that reward the user with a number of tickets at the end of each round for his or her efforts. These machines can be either mechanical, digital, or a hybrid of both. For instance, Skee-Ball is a skill-based mechanical game that rewards the player for his or her performance. Meanwhile, there are several roulette-based digital games that award tickets based on luck. 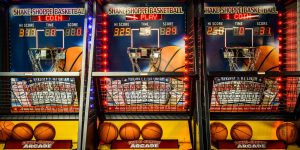 Whac-A-Mole is a very popular example of a ticket redemption game. If you haven’t heard of it, it consists of hitting moles with a rubber hammer as they pop up from their burrows. After a set amount of time, the number of moles hit is tallied and the tickets are rewarded depending on the player’s performance.

More often than not, the tickets earned can be exchanged for great prizes at the arcade’s concession stand. Granted, some of the best prizes could take a few trips to the arcade to save up the necessary tickets, but they are almost always worth the hassle, either for their use or for the street cred.

This type of arcade game leapt into popularity in the early 90’s with the creation of Dance Dance Revolution, though we can safely say that they’ve been around for quite some time now, considering that amusements like Air Hockey, Table Football (foosball), and other similar games like Billiards have been around since forever.

The main idea of interactive games is to involve other parts of the body other than exclusively the hands, either by needing to execute complex movements to compete, such as in Billiards, or by outright simulating another physical activity through the arcade cabinet, as seen on games like the aforementioned Dance Dance Revolution or other sports-based machines such as Mocap Boxing. 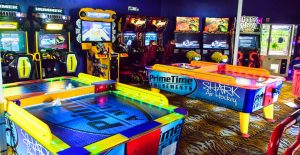 It’s worth mentioning that interactive games are, by design, fully mechanical amusements, though there are a few hybrids on the market as well.

Merchandise games are those that offer the possibility of winning prizes immediately after playing them. Success on these machines depends on a mix of luck and skill because some of them actually stack the deck against the player. The grand majority of these games are purely mechanical; very few feature digital controls. The most popular example of these games is the crane and claw machines that let the player operate a device in hopes of fishing out a prize from a pool of items. Some modern variants of these machines actually let the player purchase the products without relying on luck.

That’s it for the first part in our series of articles about getting started in the arcade business. Stay tuned for the second part, where we’ll talk all about how to lay out your machines, and set up your hall to appeal to the most amount of gamers possible.

Here at PrimeTime Amusements we have a wide selection of arcade machines from all of the categories mentioned above. If you’re looking for an amusement, in particular, feel free to contact our team of knowledgeable agents at 1.800.550.0090, or visit us at 5300 Powerline Rd, Suite 210, Ft. Lauderdale, Florida.

Building Your Own Arcade Pt. 2: Appropriate Locations and Types of Arcades