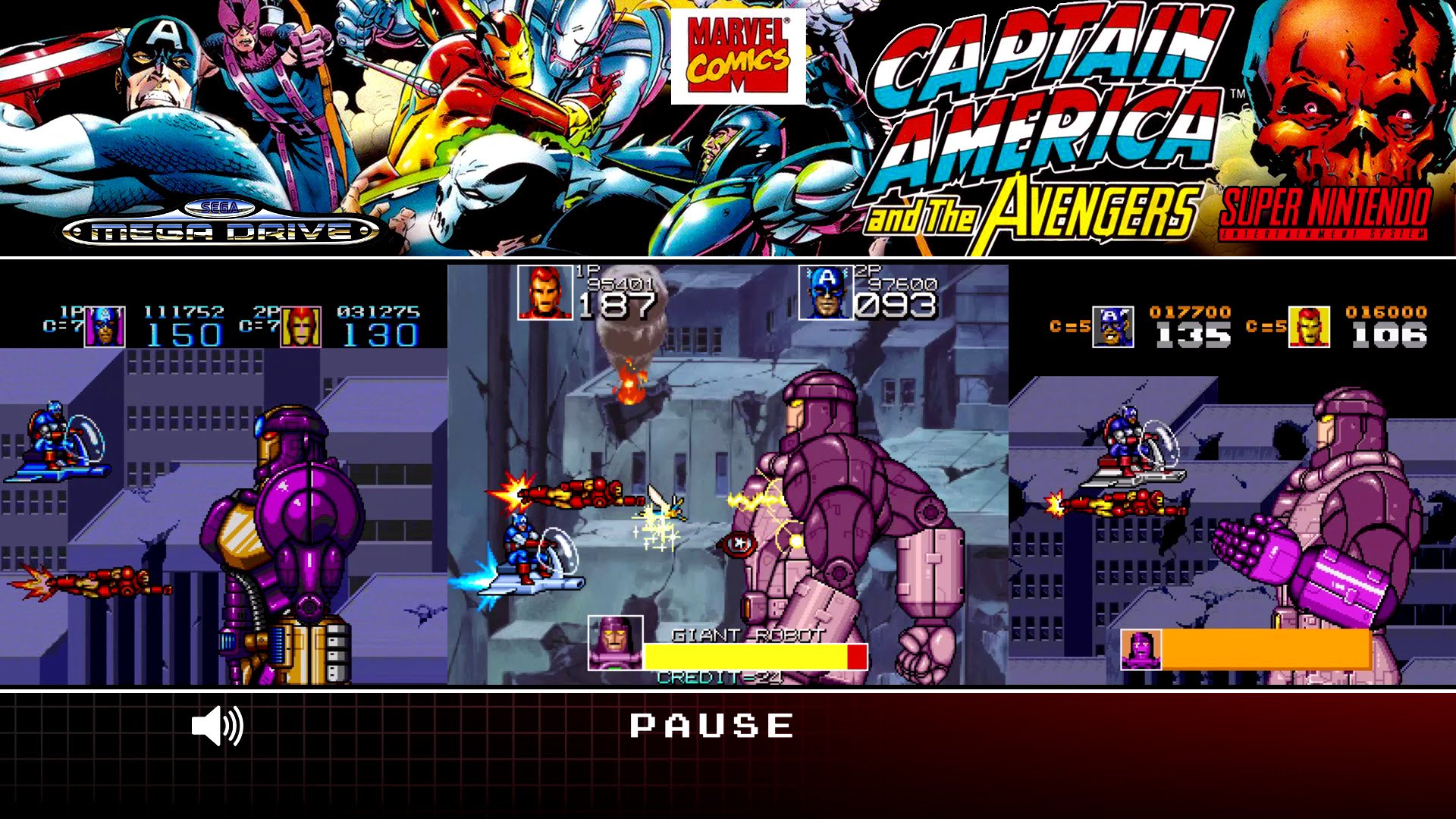 For the past few years, superhero flicks have been all the rage in movie theaters. They encompass everything we loved as kids who couldn’t tear their eyes away from their comic books: colorful visuals, engaging stories, compelling bad guys, flashy gadgets and, of course, tons of awesome fight scenes.

When it comes it comes to superhero films, it goes without saying that the movies based on Marvel comic book characters and stories have been dominating viewer interest. That’s not to say that DC Comics-based movies are bad; it’s just that they’re a bit more hit-or-miss than the competition. On the other hand, Marvel Films, with a few exceptions, have always been received with great fanfare, and even going as far as breaking box office records at times.

Since the Marvel Cinematic Universe has been the gift that keeps on giving for the past few years – with no signs of stopping anytime soon – we’ve decided to create a shortlist of certain Marvel properties which have enjoyed arcade releases.  Keep in mind that, despite X-Men and Avengers not being able to appear together on the big screen (the rights for the characters are held by different companies), they’re still both Marvel Comics characters, and will be referenced on this list regardless.

Captain America and The Avengers (1991)

Let’s start off this list with the Avengers themselves. The masked superheroes made one of their first video game appearances in this arcade game developed by Data East. Released in 1991, this title follows the exploits of Captain America and his team of Avengers as they traverse through various levels while fending off Red Skull’s forces. The game allowed players to punch, shoot, and shield-bash their way through Hydra’s forces in order to put a stop to its evil leader’s ploys. 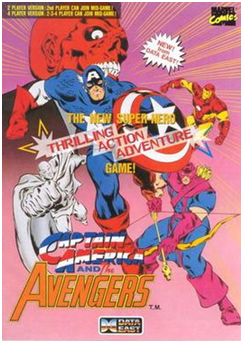 The game allowed players to choose from 4 available Avengers: Vision, Hawkeye, Iron Man, and Captain America. Each of these characters had their own special powers and abilities. All characters had the option of fighting hand-to-hand, while also using objects that they can pick up from the ground. Furthermore, each hero has their own special ranged attack, which they can use to deliver swift punishment to the bad guys. Case in point, Captain America can throw his iconic shield at the enemies, while Hawkeye can shoot his bow with great accuracy. Similarly, both Iron Man and Vision can shoot energy beams at enemies to keep them at bay.

However, these 4 are not the only Avengers to appear in this game, as picking up special power-ups may also summon other famous characters to temporarily assist in battle. Among said characters, we may find the Wasp, Quicksilver, Wonder Man, and The Submariner. These appearances are short-lived and serve mostly to provide temporary respite from the onslaught of enemies.

This one is another awesome beat em’ up developed by Konami. Based on the 1989 X-Men pilot episode titled Pryde of the X-Men, this games puts the players in control of six of the most iconic mutants in the series as they fight to stop Magneto and save the world 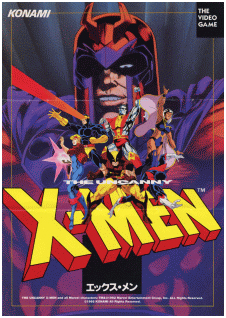 The plot is actually fairly simple and straightforward. Magneto is out to wreak havoc upon human civilization, and it’s up to the X-Men to step up and put a stop to their plan. The players must choose between 6 mutants, including Cyclops, Colossus, Wolverine, Storm, Nightcrawler, and Dazzler, and fight their way through many iconic enemies from the comic book series. Said enemies include hordes of Sentinels, Reavers, and mutant crocodiles, among others. On several occasions, the player will also have to go toe-to-toe with several of the series’ famous villains, such as Pyro, Wendigo, Juggernaut, Mystique, and even Magneto himself.

Created in two styles, a 4-player standard and a 6-player deluxe cabinet, most gamers will remember the mighty deluxe version. That cabinet consisted of two screens housed inside a towering box to create an ultra-wide screen effect that you couldn’t get at home.

While not a part of the Avengers, the anti-hero Frank Castle has made several appearances in the cinematic industry, with mixed results. While the movies themselves were not bad, they were overly violent and, most important of all, were rated R. These factors led to the movies not garnering enough attention from the public to be considered successful. Nevertheless, this character is no stranger to video games, having appeared in many titles, on many consoles, including the Nintendo Entertainment System, PC, Playstation 2, Playstation 3, and on the Arcade.

The 1993 Punisher game for the arcade was developed by Capcom, which many of you may know as the grandfather of fighting games. The game featured the eponymous superhero as the main character, while the second player could take control of Nick Fury, the director of S.H.I.E.L.D. The objective was to punch and shoot their way through the enemy forces in order to defeat Kingpin, the crime overlord. The gameplay itself revolved around the familiar Capcom beat em’ up formula, which had the player systematically defeating enemies, and traversing the stages from left to right. At the end of each stage, the player had to defeat a boss in order to advance. 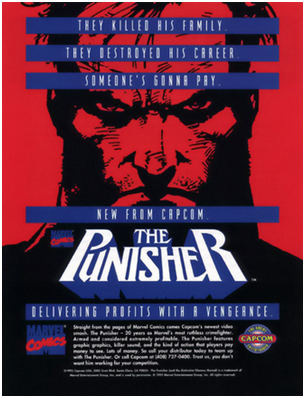 This game stands out from the others due to the vast amount of melee and ranged weapons available to the player. Throughout the different stages, the players could find and use weapons such as baseball bats, throwing knives, shurikens, Japanese swords, and so on. Furthermore, it also managed to distinguish itself from other games by frequently granting the use of firearms to the player. There are section in which it’s almost necessary to pick a weapon in order to dispatch the enemies, in true Punisher fashion.

The X-Men make their second appearance in this list with Children of the Atom. Only this time, we’re talking about a fighting game instead of a classic beat em’ up title. This arcade game, in particular, is very special, as it is Capcom’s first game using characters under license from Marvel Comics, and whose success would serve as the foundation for the very renowned Marvel Vs Capcom franchise of fighting games. 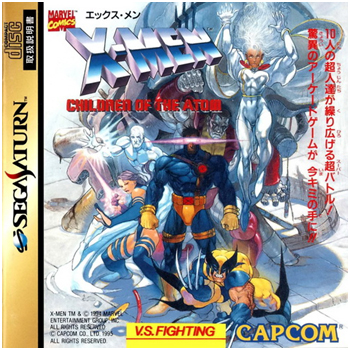 Children of the Atom was released in 1994, and followed the Fatal Attractions story arc from the comic book. The players could choose between several famous heroes or villains, and fight their way through a ladder of opponents, before fighting Juggernaut, and eventually Magneto as the game’s final boss. This title features several similar mechanics to Street Fighter 2, including a combo system with moves that could also be performed in the air. Other unique features to this game include the characters’ ability to perform dodge rolls, as well as featuring multi-level stages which allowed the characters to fall down onto lower levels when the ground crumbles. Overall, this game was very fast-paced, compared to Street Fighter, and would go on to set itself apart from the rest in years to come with the Marvel Vs Capcom and X-Men Vs. Street Fighter franchises.

The very last game in this list features another appearance from the Avengers, only this time it’s based on the Operation: Galactic Storm story arc from the comic books. Just like our very first entry, this game was also developed by Data East, only this time they developed a fighting game instead of a beat em’ up. 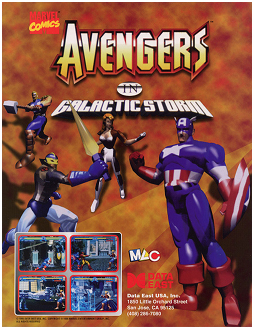 The characters in this game are those from the aforementioned comic book arc, which means that they feature several Avengers, as well as a number of Kree villains. Among the playable characters, we may find Captain America, Black Knight, Crystal, and Thunderstrike. Meanwhile, on the Kree side, we choose from a roster consisting of Korath-Thak, Doctor Minerva, Shatterax, and Supremor. Beside the previously mentioned characters, the player could also choose from a roster of support characters, which could step in during the fight to lend a helping hand before going away. Said characters include, but are not limited to Iron Man, Thor, Vision, Atlas, Sentry, and Ronan, among others.

Besides being a fairly standard fighting game, this title added a new mechanic to the formula, which was then reused in other modern games. Specifically, we’re talking about tandem moves which could be used when both the main and support characters had a full power bar. When this condition is met, the player could unleash a double-powerful tandem move for massive damage against the enemy. This gave the game an extra layer of depth, as players could opt to play defensive as their meter charges up, instead of going all-out with combos, which was the norm in fighting games at the time.

When it comes to the Avengers and other heroes related to Marvel Comics, there are no shortages of video games based on them. The constant influx of comic books, coupled with the advances in video game development technology makes this subject in particular a goldmine for new games and films. Unfortunately, If we’d take the time to go over each and every title, the list would go on forever, and we still wouldn’t be able to scratch the surface.

Do you have a favorite Marvel Comics fighting game? Let us know in the comments section below!

Here at PrimeTime Amusements we always strive to be ahead of the curve when it comes to arcade gaming sales and rentals. If you’re looking for a game in particular, feel free to give us a call at 1.800.550.0090, or visit us at our headquarters located at 5300 Powerline Rd. Suite 210, Ft. Lauderdale, Florida, 33309, where our team of knowledgeable agents will be glad to assist you with any inquiries.