The folks at Arcade1Up have been silent the past few weeks, and now we know why, as their appearance in this year’s Consumer Electronic Show has revealed that they’ve been hard at work on several new machines, all of which fall into their brand new “Pro Series” edition of cabinets.

If you’ve been following our blog in the past, or have simply been an Arcade1Up consumer, you probably already know that this team is known for a few very specific things: Giving arcade gamers access to their favorite retro titles, with affordable price tags, and with cabinets that closely resemble their original counterparts, but at a smaller scale and with some small changes to the controls and designs. These creations are perfect for gamers on a budget, or for those who simply don’t have room in their homes for full-sized cabinets. However, it seems that the team is doing a full 180 with their new series of machines, actually producing full-sized releases of their previous games. 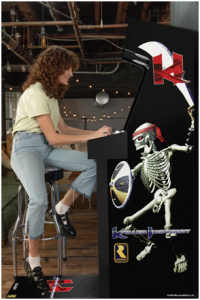 The “Pro Series” edition is Arcade1Up’s shot at creating almost full-sized arcade cabinets. In other words, these new cabinets won’t require a booster box as they’re large enough on their own, and will feature upgraded controls that feel like a proper arcade cabinet, as well as several design elements more reminiscent of the real thing, such as a chrome trim around the edges of the panels, and a molded coin door for the authentic retro arcade aesthetic, among others. These cabinets will also feature large marquees that light up to truly drive home the arcade feel.

In terms of dimensions, the Pro Series cabinets will be at least 5’ 6” tall (67.5 inches tall, to be exact), and will feature a 19” LCD monitor with a 5:4 aspect ratio. The controls, aside from being upgrades of the regular Arcade1Up machines (they don’t really specify what this means other than stating that the new controls are from Suzohapp), are spaced out further in the Pro Series, which makes it feel more comfortable to use and increases precision in certain titles, particularly in fighting games where input accuracy is key.

Regarding the games themselves, Arcade1Up revealed that their first Pro Series cabinet will correspond to the popular fighting game of the ‘90s, Killer Instinct, though we’re sure that this is just the first of many, at least if the series manages to take off.

Now, the bad part is that we don’t actually know much about the pricing, as these will most definitely be more expensive than the team’s miniature cabinets—it will at the very least go over the $600-$700 range, which is the company’s usual price tag. Moreover, we don’t know when this new game will release, though you can head on over to its product page and sign up to get notifications and updates straight to your email.

Are you interested in this new direction that Arcade1Up is taking? We’re definitely excited to see where they take this new endeavor, particularly since a company that essentially made a name for themselves making miniature cabinets, is now transitioning towards creating a line of full-sized models.