The Evolution Championship Series, or EVO for short, is arguably the biggest tournament event in the fighting game community worldwide. It is held on a yearly basis and features a wide variety of the most popular titles in the fighter genre including Street Fighter, Mortal Kombat, Guilty Gear, Tekken, The King of Fighters, and many more. EVO is where the best players from around the world gather to prove their worth in the arena, and take home not only the bragging rights of being the best in the world in their respective games, but also prizes of cold, hard cash, which are generated both from the tournament’s entry fees, and sponsor and organizer support.

However, more than just a simple fighting game tournament, EVO is also a place where the most passionate gamers in the industry gather to enjoy the intensity and excitement of fighting games, and as such, it’s also a venue for announcements, reveals, sneak peeks, and insights into current and upcoming games in the genre from the most popular developers. Case in point, in this year’s EVO, Arcade1Up recently unveiled that one of their newest products in their ever-expanding repertoire of home arcade cabinets will be none other than Marvel vs. Capcom 2. 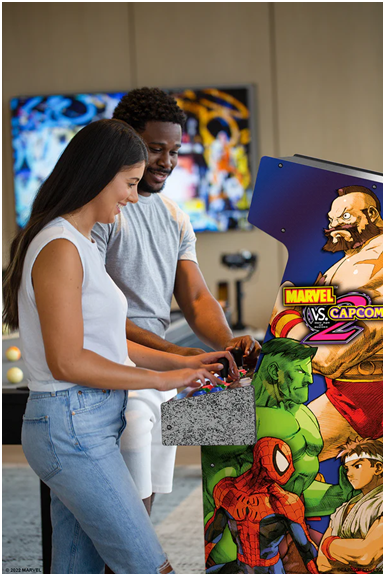 Now, as you’re probably aware, Marvel vs. Capcom has long since made a name for itself in the fighting game community, being regarded as one of household titles for any budding fighting game enthusiast. The first proper “MvC” installment in the series, Marvel vs. Capcom: Clash of Super Heroes (1998), was considered a success that sold around 3,000 arcade units, outperforming Street Fighter III and becoming Capcom’s most successful game for the time, getting ports for the PlayStation and Dreamcast shortly after launch. This game was released as a home arcade cabinet by Arcade1Up back in 2020, which flew off the shelves as soon as it launched.

On the other hand, Marvel vs. Capcom 2: New Age of Heroes was in an entirely different ballpark. Released in Japanese arcades 2 years after its predecessor, and promptly ported to many different consoles across the following 12 years, New Age of Heroes had over 1.4 million units as of 2013, obviously making it the largest title in the franchise, to date. This legacy of success is what continues to carry the MvC franchise even today, and is also why Arcade1Up is now focusing on this installment as their latest home cabinet adaptation.

The Marvel vs. Capcom 2 arcade game not only includes the titular game, but also seven other classic titles including:

The cabinet itself features controls for up to two players, and also comes with Wi-Fi capabilities for online play. This means that you won’t be limited to practicing with the CPU and only playing against other players when you invite friends over, but you can actually connect to the internet on this cabinet and challenge users from around the globe.

The Marvel vs. Capcom 2 arcade game is scheduled to begin pre-orders on Arcade1Up’s website this August 9, with free shipping to the Contiguous US. Feel free to check the product page if you want to learn more, and remember that these cabinets usually sell out fairly quickly. In this sense, if you’re interested in snagging one for yourself, we suggest putting a reminder on your calendar and placing your pre-order as soon as it’s available.