Glimpse in the Future of Arcade Gaming at JAEPO 2016 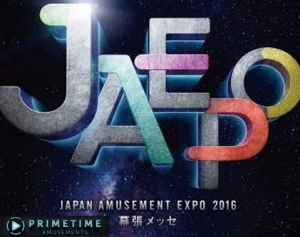 JAEPO (Japanese Amusement Expo) is an annual “amusement expo” held in Japan showcasing the newest video arcade products from the industry’s top manufacturers. Anyone who is nostalgic for the days when arcade gaming was the most popular and most accessible way to get your virtual kicks will be thrilled to know that the industry is alive and well- and pumping out some new, really fun, and unique pieces of machinery! New video arcade game sales will surely benefit from the innovations presented at the convention. Let’s take a look at this years highlights, shall we?

Rhythm games made a huge splash at JAEPO 2016. Konami announced two new games this year- which is good news for those of us that enjoyed Dance Dance Revolution and Beatmania. The first game, Otoiroha, combines the traditional “button pushing” aspect of rhythm games with a more unique twist- movable triangular disks! The two elements combine to create a challenging and fun rhythm experience. The other game is a piano-simulator called Nostalgia.

The biggest hit overall for the expo was undoubtedly Tekken 7, which is mildly surprising considering that the game was released in arcades in Japan last summer. Perhaps the draw of the game comes from the sense of nostalgia it evokes. It calls us back to the time when some games were only available in arcade. We are all eagerly awaiting the day Tekken 7 is released on PS4. Besides, who doesn’t love revisiting our favorite Tekken characters.

Sega’s Wonderland Wars was also drawing large crowds. It makes use of a 45-degree, 16:19 touch screen, and an analogue controller. Players attempt to conquer each other’s armies and fortresses in what appears to be very simplistic game-play. Upon further review, however, Wonderland Wars becomes a surprisingly complex battle of wits and strategies. Think of it as chess, except everything is approximately twenty thousand times cooler. Give or take.

Aside from big news from big names; the convention featured a lot of other cool little gadgets and gizmos.
Purikura “print club” photo booths let users take pictures of themselves, edit them, and print them into fun, quirky stickers. A virtual horse betting station featuring Sega’s StarHorse 3 Season V, similar to the Sega classic Derby Owners Club, took up a large portion of floor space, and seemed to be fairly popular.

Tako Tako Panic took arcade gaming back towards the carnival realm- users shot real balls through the legs of an animatronic octopus. Finally, the latest version of the popular crane machine, UFO Catcher 9 was on full display and continues to draw large crowds.

Ultimately, JAEPO 2016 proved that Japanese arcade innovations and video arcade game sales are anything but obsolete. There are plenty of new and interesting products hitting gaming floors. The arcade game world is just getting started!