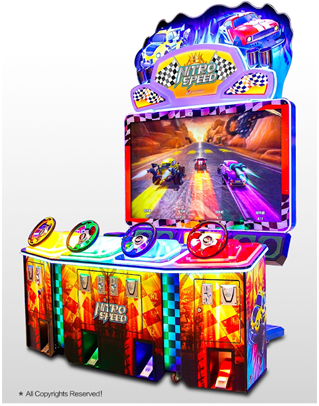 Even though the industry is slowly recovering from the beating it took last year, the new releases haven’t stopped coming. Companies have been working tirelessly to bring us games in what has started to be called popularly “the new normal”.

One of such companies is Ace Amusements, a Chinese manufacturer of arcade games and amusements that’s responsible for producing a variety of cabinets and other types of devices for FECs. And while they feature their own versions of popular attractions like light gun games with a variety of themes, basketball ticket redemption machines, bowling-styled video skee-ball games, and many more. However, they also develop their own unique take on other titles. Case in point, their newest game, Nitro Speed, is an upcoming racing game that seems to borrow the most popular elements of other renowned games, and wraps them up into a neat package with great presentation and graphics, and refreshing yet familiar gameplay.

Nitro Speed is a 4-player arcade racing game that revolves around fun multiplayer splitscreen matches where gamers take potshots at each other by picking up powerups, and race to be the first to reach the finish line, similar to games like Mario Kart, or maybe Sonic & All-Stars Racing. And while the game doesn’t do much to innovate upon the classic arcade racing game formula, it features great graphics and a silky smooth framerate, even with 4 players gaming on the same cabinet.

According to the company in charge of distribution for the product in the UK/EU, the United Distributing Company, the game has four different cars to choose from, as well as three stages to race in, which doesn’t sound like much, but considering that this is supposed to be a videmption game, it’s supposed to offer quick matches, with players coming and going, instead of massive, sprawling circuit games that can go on for longer periods.

Oh, and you read that above statement right; this title is meant to be a ticket redemption game. We know it’s kind of an odd choice this time around, but it could be an interesting option for having fun and earning some tickets in the process. Alternatively, just switch it to amusement mode and let everyone play normally.

According to the product page, Nitro Speed is the first large LCD screen new concept 4-player racing game in the Chinese amusement industry. UDC, on the other hand described it as such:

“Race against your friends and family to win tickets with the Nitro Speed car racing redemption game. Take your pick of one of four exciting vehicles and speed along multiple exciting race tracks including desert canyon, cityscape and winter wonderland. Take control with the steering wheel and put the pedal to the metal to speed off on your way to collect rings and power-ups, doing your best to avoid obstacles. Featuring a large HD display, colour graphics and attractive cabinet with bright LED lighting.”

We will be keeping an eye on this game for the possibility of it arriving into the States, although we’ll have to wait for Amusement Expo 2021 in June or IAAPA 2021 in November to find out if this and any other Ace Amusement titles will be headed our way!