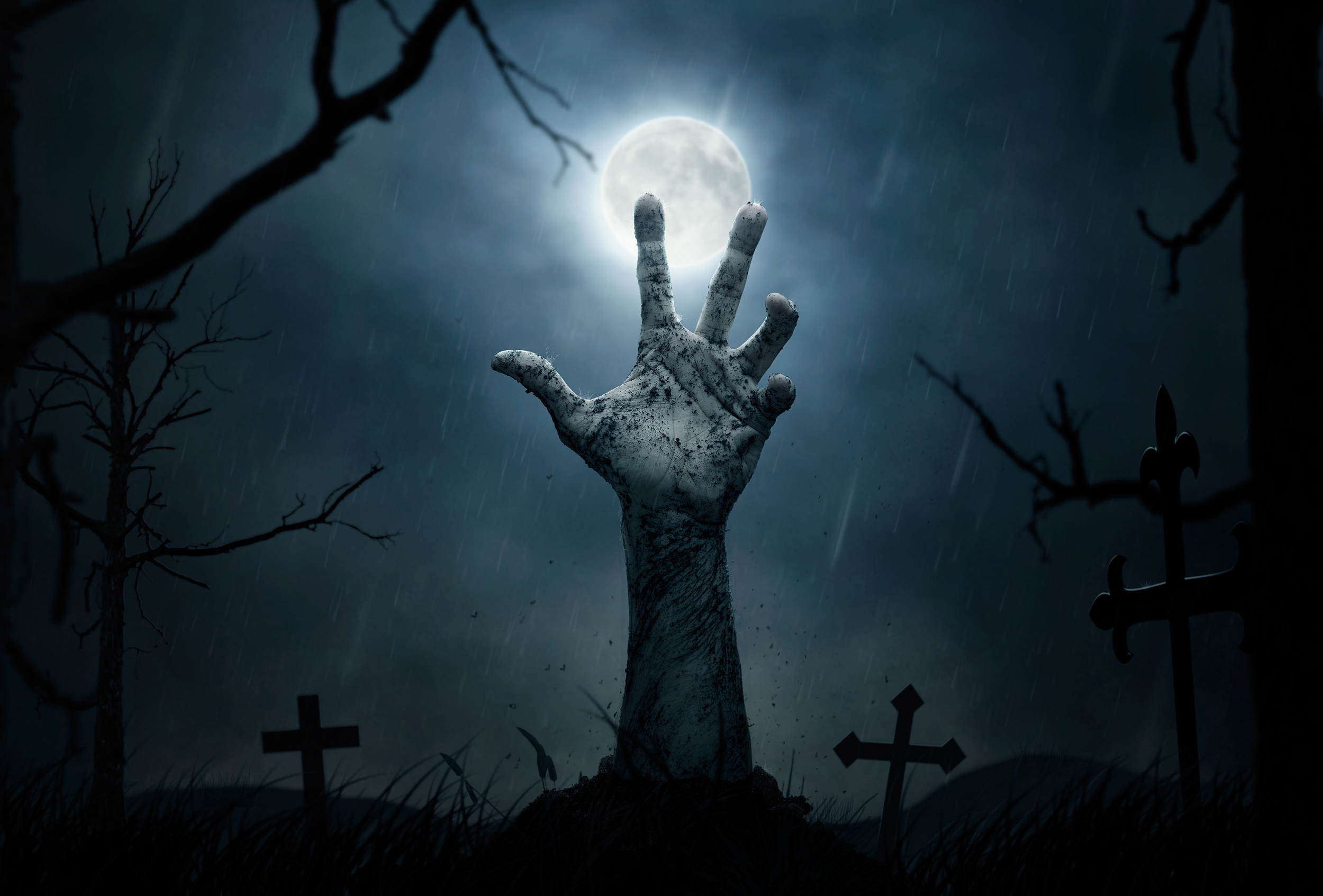 Halloween is just around the corner, and with it, comes the ton of spooky specials on TV, coupled with the timely releases of horror-themed movies. The remake of the hit horror film of the 90’s ‘It’ released a few weeks ago to critical acclaim, setting the mood for what is turning out to be an appropriately spooky month. I have spent the last week watching horror marathons, including iconic film staples such as Nightmare on Elm Street (1 through 8) and Friday the 13th. However, as a born & bred gamer, I only feel truly at home when I’m behind the wheel, so to speak, of my favorite games. I’m more of a PC gamer myself, so I’ve tried to create a theme of spooky games to play through this month in the spirit of the occasion. That’s not to say that there aren’t great horror games on the Arcade though, because there are some true classics to be found there.

The thing about spooky arcade games is that it is a genre that, for the most part, has gone unnoticed by the general populace. Sure, we’ve got some of the most iconic titles such as The House of the Dead, which has become a staple of most arcade establishments due to its engaging gameplay, awesome graphics, and hilariously bad voice acting. To be honest though, games like it are usually purchased due to the gameplay, and not for their horror theme. The problem with arcade horror games is that, in order to fully fulfill the purpose of said games — which is to make the players pee their pants out of fear —, they usually have to be played alone in the dark and, if possible, with headphones. Arcade establishments are usually counter-productive for this setting and, for this reason, most arcade games are usually developed for home consoles, nowadays.

Regardless, if you’re one of those fearless arcade gamers, who are always on the look for scary horror games, we’re pleased to inform you that there are actually several cabinets out there which might give you a good spooking. In this article, we’re going to list several awesome horror games which are bound to get a good jump start out of you. If you’re a fan of scary games, keep an eye out for the following games:

The House of the Dead (Sega)

We already mentioned this one above, so let’s get into what makes it so popular. It is a series that managed to earn a place in virtually every arcade establishment you will find out there. At its core, The House of the Dead is a rail shooter in which the player uses a light gun to shoot enemies as they appear on the screen. It is called a ‘rail shooter’ because the player advances automatically through the stage after each screen has been cleared of enemies, akin to advancing on a train which can only go where its tracks take it. HOTD did innovate by offering multiple paths to explore, adding extra replay value. Players will sometimes be presented with two choices while occasionally being able to explore secret areas by shooting the right object at the right time. 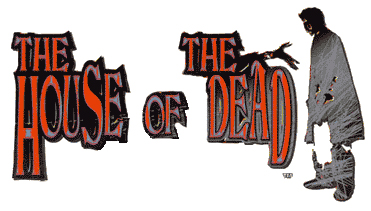 Throughout the game’s stages, the player assumes the role of Agent Thomas Rogan as he traverses deadly mansions and dangerous city streets in order to discover the truth about the recent horrific monster attacks that have been happening lately. The main gameplay consists of nothing more than shooting the enemies on the screen. The player is equipped with a pistol that can hold up to 6 bullets at a time, and he can recharge his weapon at any time by pulling the trigger while pointing the gun away from the screen. The player’s health is represented by a set of torches on the bottom of the screen; he loses one of these when he is struck by an enemy, as well as when he shoots a civilian. The only way to recover lost health is by shooting medkits that appear in various points of the stage, or via those that are granted to him by rescued hostages.

The House of the Dead combines pinpoint accuracy with split-second action in order to keep the player immersed in the world it creates. Despite not being actually very scary, the game has grotesque creatures and a creepy setting and storyline, which earns it a place on the list.

Released in 1988 and developed by Namco, Splatterhouse is a game which takes the sidescrolling beat em’ up formula and spices it up by adding tons of gore and horror elements to its gameplay. In this game, the player takes control of a parapsychology student named Rick who is killed in the West Mansion while he is taking shelter from the rain with his girlfriend Jennifer. After being resurrected by the “Terror Mask”, Rick dons a hockey mask (not unlike Jason’s from Friday the 13th) and a tattered blue jumpsuit and has to fight his way through the mansion’s many horrors in an attempt to save his beloved from the evil fiends that reside within. 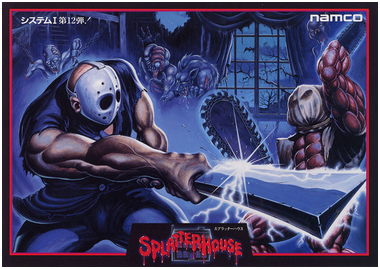 The gameplay itself is very similar to a classic sidescroller beat em’ up: Rick has the ability to both kick and punch his enemies, as well as dispatching them in a very violent fashion via the use of several melee weapons. The stages play from left to right, and can sometimes feature vertical movement in the form of pitfalls and ladders. Each stage ends with a boss which, in a variation upon the classic boss fights of the genre, usually consist of more than simply hitting the boss until it dies.

This is a 1986 arcade game which, despite poor sales, managed to create a cult following due to its gratuitous violence and tons of gore. The game was developed by Exidy, a company which had created several hit arcade games and was in business from 1974 to 1988. 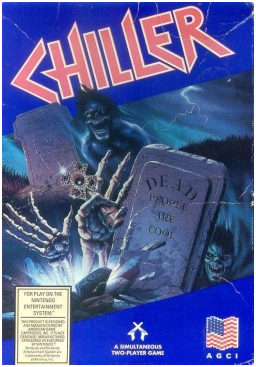 The gameplay revolves around blasting creatures or people who are setup in a static scene with horror elements, like a castle hallway. The most infamous of these scenes involves shooting victims inside of a dungeon who are strapped to medieval torture devices. Where you can shoot them limb by limb and there is plenty of red blood to be found, it doesn’t take a lot of imagination to know why this caused a stir. Chiller sparked massive controversy due to this violent nature, in that most gamers would argue about the ethics of killing seemingly innocent victims as they lie defenseless, as opposed to other games where the enemies (innocent or otherwise) at least had a fighting chance. Consequently, most arcade owners simply refused to purchase the game, and it went unnoticed save but by a few hardcore horror fans who delight in gory and extremely violent games and movies.

Developed and released by Taito in 1990, Space Gun is a first-person shooter game which offers a pleasant spin on the usual settings of other games of the time, which usually happened within haunted mansions, sewers, dark streets, or other types of spooky locations. Instead, this game unfolds entirely inside a damaged space station which the player must traverse while dealing with the monstrosities lurking within. Space Gun plays like a normal FPS, but with the main difference being that it offers ‘digitized gore’ which allows the player to shoot off the limbs of the monsters in order to cripple them and remove their offensive capabilities before striking the killing blow. Furthermore, the player may find upgrades for their current weapon interspersed throughout the various sections of each stage, which help to increase his firepower. 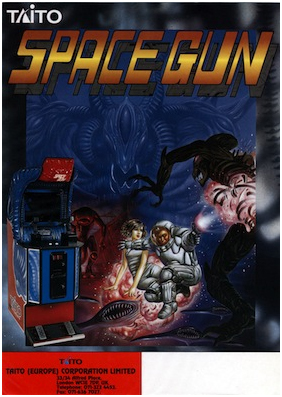 Depending on the version of the game being played, it will offer 6 or 7 stages, each of which is divided into 4 subsections, and which feature a final boss at the end of each stage. The player must make use of keen aiming and carefully-placed shots in order to dispatch the enemies before they have a chance to damage him. There is an added layer of strategy in Space Gun in the form of foot pedals built into the arcade which, when used, can reverse or advance the direction in which the character is moving. This is essential for keeping alive as it basically allows the player to backstep when fighting in order to do more damage to the enemy before they manage to hit him. However, is used excessively, backpedaling can do more harm than good, as the player can also lose by running down the timer on each stage.

Space Gun features lots of body horror and a fantastic setting which will keep players hooked and wanting for more opportunities to rip and tear their way through the game’s stages.

Developed and published by Data East in 1993, Night Slashers features gameplay similar to Capcom’s Final Fight series, consisting of a sidescroller beat em’ up in which the player fights hordes of zombies, mutants, elementals, and other nasty creatures to prevent the evil King Zarutz from taking over the Earth and turning the planet into a den for creatures of the night. Suffice to say, Night Slashers has a horror setting in all of its stages, even going as far as featuring stereotypical horror enemies such as Vampires, Frankenstein Monsters, Mummies, Golems, and Mad Scientists as stage bosses. 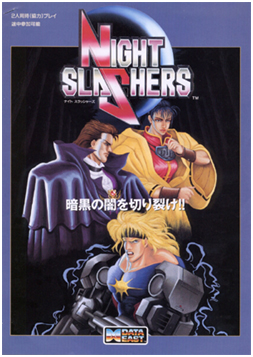 The game allows up to 3 simultaneous players to battle their way through its stages. It also features additional elements to accentuate its horror setting, such as full gore and blood, a “Go” arrow which also flips over to reveal the words “…To Hell!”, and a short yet engaging spooky story which is told via short dialogues and cutscenes.

There are, of course, tons of other horror games for the arcade. The ones on this list are just some of which, due to their setting or popularity as horror games, have managed to garner a reputation among fearmongers. Do you have any games you’d like to add to this list? Then feel free to leave a suggestion in the comments below!

Be On The Lookout For David T. Goldfarb in 2018