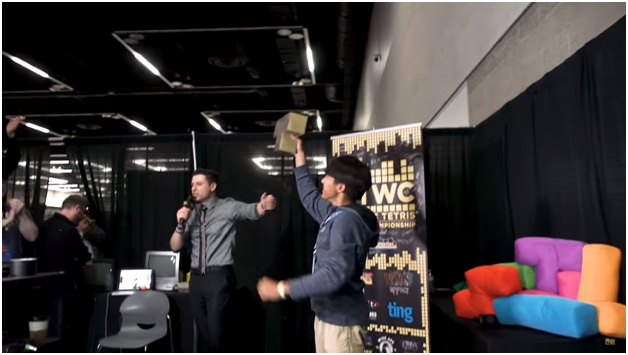 For many of our readers, this might come as old news, seeing that it happened on October 2018. However, we believe that some pieces of news are impressive enough to warrant sharing them even after their “expiration date” has passed. For those of you out of the loop, on the date we just mentioned, 16-year-old Joseph Saelee broke the reigning champion’s world record at Tetris. The record was broken at the 2018 Classic Tetris World Championship, a yearly event hosted by the Portland Retro Gaming Expo since 2010.

We’re sure that there are two reactions to this development: the first one being by hardcore Tetris veterans in shock and awe at the prodigy that is Saelee. However, we’re sure that the most common reaction is something along the lines of: “What, some people still play Tetris?”

Well, as it turns out, the classic Russian-made game from 1984 is still very much in demand in some niche gaming communities where gamers practice and hone their skills in anticipation for the yearly Classic Tetris World Championship, as well as some other minor events that go on throughout the year.

For those who are not actually acquainted with the game, Tetris consists of stacking tetriminos, which are geometric pieces that are composed of four squares, in the game screen. The sequences in which these tetriminos fall from the top of the screen are random, and it is the player’s duty to stack them in a way that they form a solid horizontal line across the entire playing field. When the player manages to form a horizontal line, it will disappear and grant points to the player according to how many lines were “burned.” Meanwhile, the pieces that were above the line that disappeared will fall down. When the player clears a certain number of lines, he will progress onto the next level. As the player advances, the tetriminos will fall faster, which puts more pressure on the player, who will frantically try to stack them appropriately. However, there are some variations of the game in which it ends after a certain number of levels. The game gets its name from the Greek prefix tetra, which means four, and tennis, which is the favorite sport of Alexey Pajitnov, Tetris creator. Furthermore, every time a player manages a 4-line burn using an “I” tetrimino, it is called a “Tetris.” 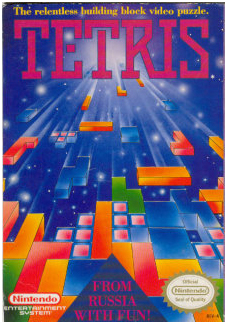 Even though it is arguably one of the most simplistic games invented (even for the time), there is much more to Tetris than meets the eye. Just like other disciplines like chess, Tetris is a game that has many different methods of play, strategies, and configurations that push the player’s abilities to the limit. Like Chess, Tetris has the width of an ocean, and the depth of one, as well.

For this reason, when it comes to the Classic Tetris World Championship, you would expect the best of the best to convene and put their skills to the test in competitive matches. In this event, players face off in versus matches, using classic NES consoles on CRT televisions. The grand finals are streamed live and make use of edited software to display more information on the screen. On these occasions, the players must defeat their opponents in 3 matches to claim the title of World Champion. Speaking of which, the reigning champion, Jonas Neubauer, had held the title for a near-interrupted 7-year spree. His championship was only taken by Harry Hong in 2014, before which Neubauer had won on the four previous years. The next year, in 2015, Neubauer won his title back and held it for three more years. That is until newcomer contender Joseph Saelee came along and took the title of champion for himself.

The finals, which lasted around 20 minutes saw how Joseph completely obliterated runner-up Jonas three to zero. The final round, above all, saw a clutch comeback victory from Joseph, who was more than 4 Tetris down. However, at level 26, Jonas ran into some issues setting up for a Tetris—a feat that is very difficult at that point and missed his chances, which ended up with a loss with a 100-thousand point lead over Joseph. However, Saelee came back with Tetris after Tetris, and surpassed Neubauer on level 29, finally taking the championship title. 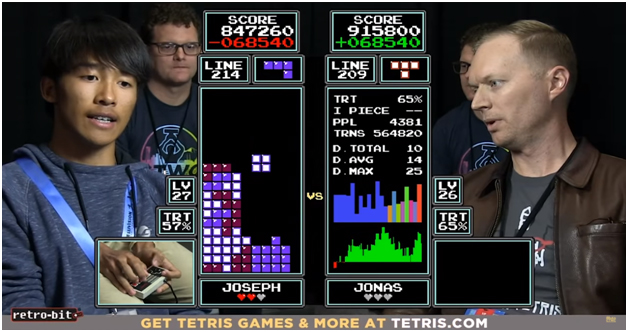 After an emotional celebration where Joseph was at a loss for words, Neubauer, being one of the most important figures in the industry, and the most important Tetris Ambassador in the world, delivered a heartfelt speech about the match:

“The kid played, with a pure heart, the most clutch Tetris that we’ve seen from anyone. He just really had the natural ability, and let it shine as bright as he could in his first tournament. I really can’t say anything that you guys aren’t thinking right now, but what an exceptional performance, and what an honor to pass the torch to a new generation of Tetris players. Good game, Joseph,” Jonas ended.

However, he assured that, just like in 2014, this was not the end of Neubauer, and that he would be back this year to retake the title.

We really can’t put into the words the intensity of the grand finals, so here’s the video, instead.

What did you think of the stellar performance from these two titans? Leave a comment down below!