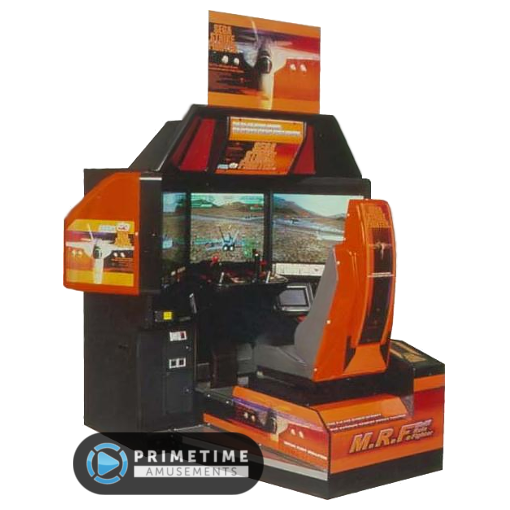 You’ve trained hard, now it is time to put your skills into action with Sega Strike Fighter!

Pulling various ideas from the After Burner, you embark into hostile enemy territory in an F/A-18 Hornet attack fighter. Encounter MIG fighters and Bear Bombers as the action happens both in the air and on the ground! Designed like a simulator, this game features a more complex control scheme than modern players may be used to. This serves to make the game more realistic and thus more enjoyable. There are three challenging levels to explore, each with selectable mission objectives as a way to keep players coming back for more!

Pictured is the three-screen deluxe version; the game was also released in a single screen standard model.

– Three levels with various objectives that the players can choose from after completion of the mission.

– Ask about converting the displays to a modern LCD

– Sega’s Sega Strike Fighter is no longer produced, having been released in 2000. Please call us about availability. All used models pass through PrimeTime Amusement’s “Certified Pre-Owned” program, which guarantees that the game will be completely refurbished and ready to operate upon arrival.

Want to see Sega Strike Fighter in person? You can find it at the PrimeTime Arcade inside the X-Treme Action Park in Ft. Lauderdale, FL!