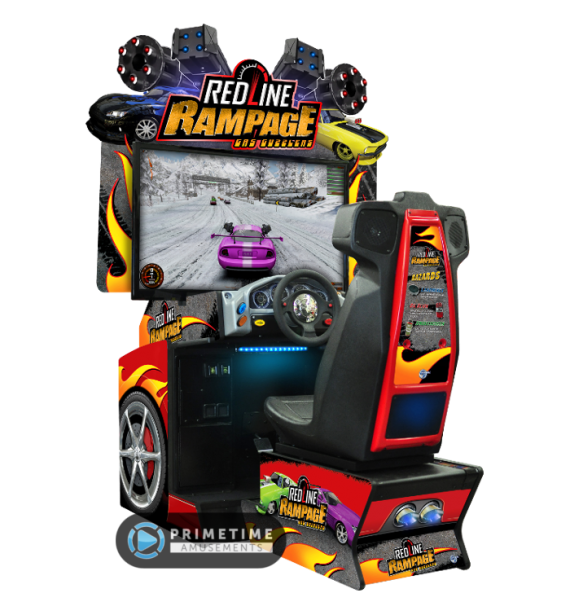 Anyone who is familiar with the modern arcade business knows that when it comes to video games, it’s hard to beat racing and shooter games. That’s where GlobalVR’s Redline Rampage excels – it’s both!

Based on a PC game of the same name, the arcade version brings this game to life in the best way possible. Racers drive through exciting, realistic environments in the quest to pass the finish line first. The twist is that you can pick up a variety of weapons to give you the edge! That includes Gatling guns, rockets, oil slicks and more. Think of it as Twisted Metal meets Mario Kart (with a little bit of Spy Hunter thrown in for good measure).

Check out Redline Rampage Gas Guzzlers in action from our friends at Arcade Heroes. This was the appearance of the game at IAAPA 2014.

Users race across six total tracks (one has to be unlocked by playing), driving one of eight possible vehicles. Those cars range from Muscle cars to Exotic Sports cars. Operators can also adjust the game to their liking – if they would prefer this be a straight racer kind of game (no weapons), set it to Green label mode and enjoy!

– Vehicular combat means that you’re doing more than just racing! It’s almost like a modern RoadBlasters or Meanstreak by Atari

– 7 cars plus 1 unlockable to select from, including Muscle, Import and Exotic Sports Cars

– Select “Guns” or “No Guns” for green or yellow label play

– Hazards to avoid on each track

– Power-ups provide you with new offenses or defenses

– Link up to four units for multiplayer mayhem

This game is also available as a conversion kit so that operators can take a low earning title and refresh it with something new! This kit is only designed to convert older GlobalVR racing games over to the new title. This includes: Need For Speed NFS, Need For Speed Underground, Need For Speed Carbon, NASCAR Racing, NASCAR Team Racing, and Twisted: Nitro Stunt Racing. For any of these games that used a stick shifter, that will be replaced with a boost button; Redline Rampage also does not use older GlobalVR card readers. Click here for details on what each of these cabinets requires for conversion along with additional conversion instructions (PDF). 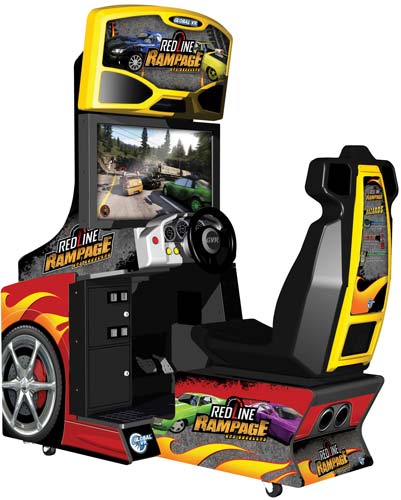 Example of a Need For Speed Carbon Standard cabinet converted into a Redline Rampage.