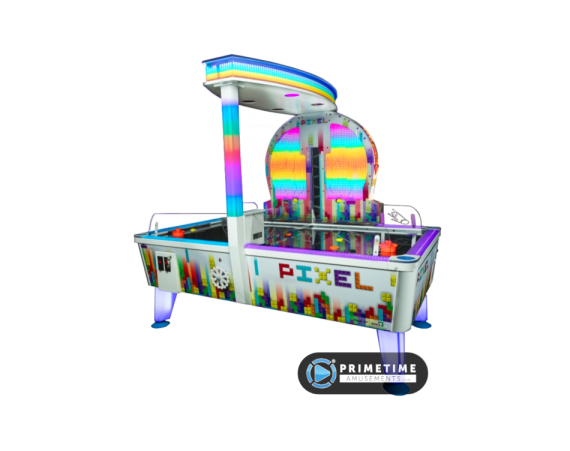 From ‘vanilla’ air hockey for two players, to four player tables and curved surfaced, Wik has a long tradition of crafting commercial air hockey experienced. Now they are jumping into the realm of the dazzling multipuck table with PIXEL.

The basic goal of Pixel is the same as any other air hockey table – score the most goals first – but that’s not all. Changing the experience into something more frantic and memorable, Pixel incorporates a multipuck launching system. Players don’t have to touch the puck after a score has been made, as an auto-loading system will re-incorporate the pucks into game through the large billboard attached to the side of the game. A conveyor belt with a transparent top also shows which pucks are about to be dispensed.

Two types of pucks are dispensed onto the playfield: large standard size and a smaller ‘mini’ size. Each is worth a different amount of points when they cross into the goal. Scores are tracked on the giant RGB LED display that is integrated throughout the billboard marquee, which also provide lighting and animation during and in-between gameplay.

Pixel air hockey debuted at IAAPA Expo 2019, where we were there to check it out. Video available in 4K UHD; subscribe to us on YouTube to stay up-to-date with the latest product videos!