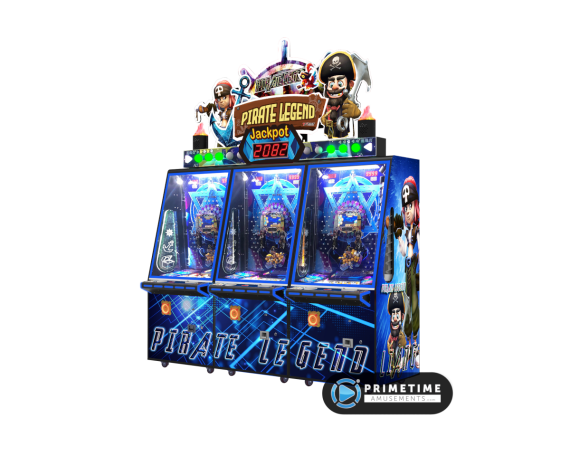 Become a fabled player at the arcade with Pirate Legend by Wahlap!

Pirates are always after treasure, and things aren’t any different here! Pirate Legend is a marble drop/pusher game that comes in an impressive display with three player stations. Standing at 9 ½ foot tall with the detailed marquee, this is sure to catch attention in any arcade venue.

Players credit up their game, then push the button to release the balls to the playfield below. While metal pins will divert the balls into different directions, players want to aim for the spinning gear mechanism that is present in the center of the field. This activates more game modes that can mean higher winnings! These modes include a Progressive Bonus Jackpot; The Super Boat Challenge; Party Time; and Lucky Draw. Which one you can win is represented on the video screen built into the back. This screen also allows players to interact in some modes, such as the Lucky Draw where you push the button again to stop the spinning counters to possibly win a ton of tickets!

Beneath the gear is also a swinging boat-shaped mechanism called the Super Boat, which holds giant yellow marbles. Winning the Super Boat Challenge will open up the reservoir of marbles to the pusher platform below, which is sure to win players even more tickets! Any white marbles pushed over the edge earn 1 ticket while yellow orbs earn 20 each!

To top it all off, there are 5 “Connection Lights” at the top of the game, representing the biggest jackpot. Be the player to collect the 5th light and win the big posted jackpot!

– Single-button gameplay keeps things simple for all types of players

– Hybrid of video & mechanical gameplay; Video screen installed into the center of each player station