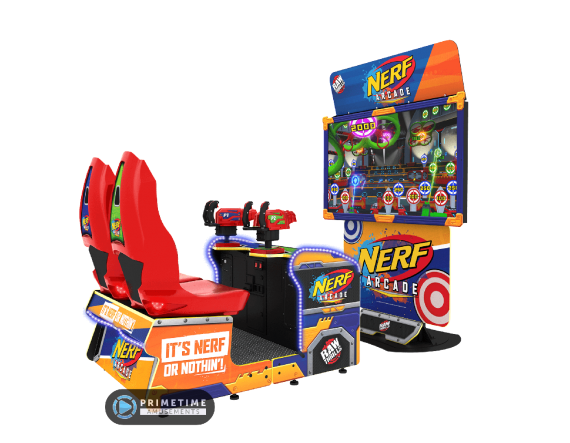 Nerf guns have long played a role in American culture, since the soft gun toys first appeared in households in the 1970’s. Now you can enjoy using virtual Nerf at your local arcade with Raw Thrills‘ Nerf Arcade.

Nerf Arcade packs in the fun for 1-2 players, offering soft dart target blasting action over four different levels. Colorful targets appear on the screen, some are static while others will move around. Hit as many targets as you can before the timer runs out to progress!

Nerf Arcade comes with two built-in game modes: ticket redemption (default) and amusement-only mode. In the latter, you play for points & the high score instead of tickets. In either mode, players can also share their scores online through Raw Thrills’ High Score website, where they can win additional prizes such as T-shirts!

Check out NERF Arcade as seen at Amusement Expo 2019. Video available in 4K UHD; subscribe to us on YouTube to stay up-to-date with the latest product videos!

– Another exclusive arcade outing by Raw Thrills, with the powerful Nerf license

– Molded seats allow the players to enjoy the game in comfort