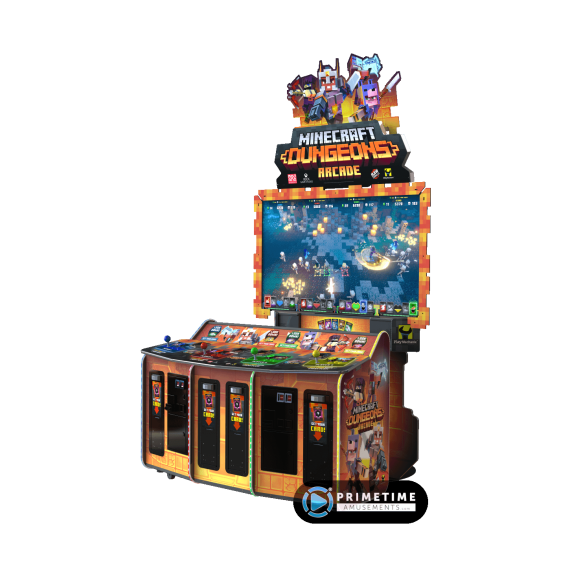 As the most recognizable gaming franchise in the modern world, Minecraft by Mojang & Microsoft holds consistent and strong popularity with people of all ages and tastes. Tapping into that by bringing the concept to arcades for the first time is Minecraft Dungeons Arcade by Play Mechanix & Raw Thrills.

Minecraft Dungeons Arcade is a unique arcade adaption of the console game Minecraft Dungeons. That title took the concept into a new direction, offering “dungeon crawler” style play that you would expect to find in games like Diablo. The arcade version refines that to properly tie-in to the arcade experience, offering faster and easy-to-learn gameplay as players hack ‘n slash their way to victory among the hordes of creatures.

Giving this an additional boost is the card vending & play system. With each play, customers receive 1 of 60 collectible game cards. These cards can be scanned into the game to change or enhance the equipment that the player has, including their melee & ranged weapons, their armor, their pet or their skin. Even if players do not use them for the gameplay, they can always go and collect them, which has proven to drive play on games like Injustice Arcade. More cards can be released down the road, giving the game an extra interest boost!

Here is Minecraft Dungeons Arcade from its debut at Amusement Expo 2021. Video available in true 4K UHD; subscribe to us on YouTube to stay up-to-date with the latest product videos!

11/15/2022 Update – SERIES 2 NOW AVAILABLE! – Series 2 cards are now available to order for existing Minecraft Dungeons Arcade machines. This update includes much more than new cards however, as it unlocks a whole new underwater level called The Hidden Depths. Order a box or a case of S2 cards today to get your machine up-to-date and earning more!

– Minecraft is the most popular & best-selling franchise in gaming history, appeals to people of all ages.

– Based upon the Minecraft Dungeons console game, but wholly unique in it’s own style and features

– Supports 1-4 players with a focus on co-operative play

– Nine exciting stages to explore with over 100 minutes of gameplay!

– Online enabled through the Coin-up Network for free software updates

– More info on the gameplay is found over at Arcade Heroes.

– Series 3 cards set for release, along with a new level, at a future date