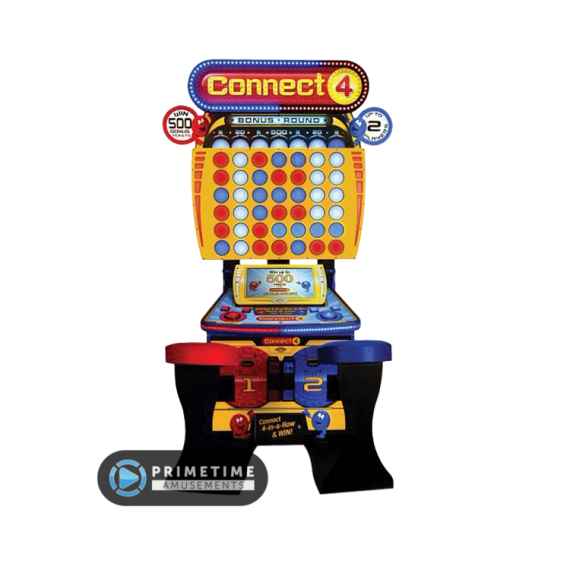 The original four-in-a-row vertical checkers game comes to the arcade thanks to Connect 4 by Bay Tek Entertainment.

With it’s bright aesthetic and nostalgic appeal, players will be instantly attracted to the game as they compete against the computer or another player. Take turns dropping the red or blue checkers into the grid using the arrow buttons on the red/blue player stations. Your goal is the same as the board game – connect four checkers in a horizontal, vertical or diagonal row to win. Thanks to this being an arcade redemption game, win and enter into the bonus round, where you can win 500 tickets!

This is a smaller ‘street’ version of the game that was also produced in a Giant model.

– Licensed from Hasbro and based on the original board game

– Ships with a standard pair of coin mechanisms & a ticket dispenser for each player station; card swipe ready

– Bay Tek’s Connect 4 standard is no longer in production. Please call us about availability. All used models pass through PrimeTime Amusement’s “Certified Pre-Owned” program, which guarantees that the game will be completely refurbished and ready to operate upon arrival. Also ask about our game rentals!