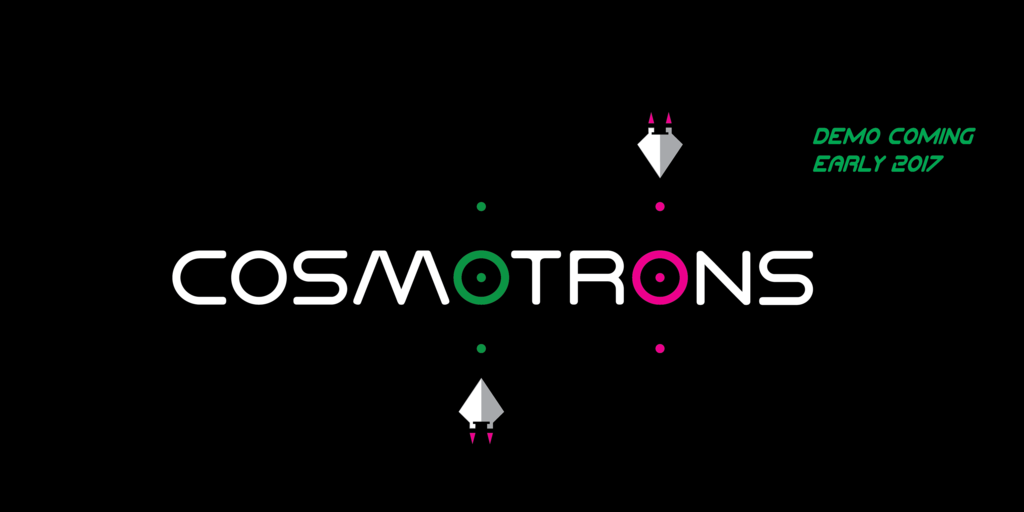 Almost 4 months ago, we talked about the arcade game Cosmotrons on another article; specifically, we went over how the game was shaping up to be the spiritual successor to Gravitar and Asteroids, as it takes these games’ core mechanics and uses them as its own while spicing them up with new additions to create an entirely unique experience.

For those that haven’t read our last article about Cosmotrons, or for users who simply want a refresher: Cosmotrons is a game which is being developed by long-time arcade enthusiasts Arcadeaholics LLC. These die-hard developers saw the potential of space shooters — and how there are currently not nearly enough of these games — and decided to make their own cabinet by taking the formulae of our most beloved titles such as Asteroids and Gravitar and giving them a modern touch. Both games originally had a similar control scheme, as well as similar concept, and they both were easy to get into but really difficult to master.

The controls consisted of 2 buttons for turning your ship left and right, respectively, a button which generates forward thrust, a single fire button to unload your weapons, and a context-sensitive button which, as its name implies, performs different actions depending on the situation. Additionally, like its predecessors, Cosmotrons makes use of vector graphics to convey its gameplay, which was a really popular technique for some arcade games back in the 80’s, consisting of smooth lines and dots to create the arenas and stages in which the players will be duking it out.

However, this is where the similarities end, as Cosmotrons has plenty of new features in store for interested players, including a repertoire of different spaceships, all of which offer unique stats and abilities, twenty arenas which help to get the gameplay fresh and varied, detailed game records and stats which give insight on who the best player is after each round, and several different game modes, including a “Space Sprint” bonus round.

The game really shines when it comes to multiplayer, as the cabinet is large enough to easily accommodate 4 players simultaneously. Playing with friends is truly an awesome experience as the arenas and controls add up to create challenging and satisfying deathmatches which can be compared only with the most engaging multiplayer arcade games such as Pac-Man Battle Royale, or Killer Queen Arcade, both of which came out almost 20 years after the space shooter craze had already died out.

As the game continues development towards a general release, developer and publisher Arcadeaholics have taken to the road with the objective of spreading the news about their new arcade game in what is shaping up to be an unprecedented event in arcade history. You see, most game testing and pilots don’t usually garner such a big following like Cosmotrons has gotten, so far; the first tests are usually held in clandestine locations and the developers themselves are not required to attend. However, in an awesome turn of events, the Cosmotrons devs are taking the testing and advertising of their game in their own hands as they have packaged 2 cabinets and began to tour several locations, urging players to stop, play, and give feedback on the game.

The tour began the journey in July and went through August, involving stops which spanned a variety of arcade establishments in several states. This included: The Garcade in Wisconsin, Up/Down Arcade in Iowa, Hyperspace Arcade in Colorado, Game Grid Arcade in Utah, Grinkers in Idaho, Dorky’s in Washington, Ground Kontrol in Oregon before enjoying a prime spot at the CAX 2017 event in Santa Clara, CA. On their way back to Wisconsin, they also visited Starfighters Arcade in AZ and the Galloping Ghost Arcade in IL. Some of these demonstrations featured impressive setups which actually made the game really stand out among the rest, such as the one in Ground Kontrol pictured in the tweet below

We’re at @GroundKontrol tonight. What an impressive setup they have for us! You don’t want to miss this. #cosmotronstour #arcade #indiegame pic.twitter.com/LbhDsZwRhL

It goes without saying that the tour was a smashing success and, while the developers ensure that the game is ‘still’ in an alpha/beta stage, it has proved to be very playable and fun, laden with old-school retro graphics and classic ‘Atari’ sound effects for a truly engaging experience. The jury’s still out on whether the game is currently worth the investment, though it is definitely shaping up to be one of those “games you must own”. However, before we give our official verdict, we’ll have to wait until Cosmotrons launches at the end of 2017 and shows us the final product.

Until that time rolls by, you can rest assured that we’ll keep you updated on the development of this new and promising arcade game!

A Quick Look at the New Golden Tee Golf 2018