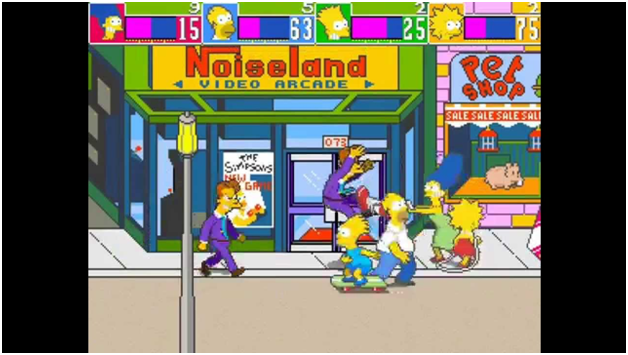 Arcade1Up does it again, this time with a re-release of The Simpsons Arcade. This is a title that was popular three decades ago, and aside from the shock of the realization that it has been that long since we first played this one, we couldn’t be more excited to be able to play it again, and on an upright cabinet of all platforms! The company’s commitment to bringing back the awesome games of our childhoods this time has extended to one of the world’s most beloved cartoon franchises, and if you’re interested in getting one for yourself, you’d do well to mark August 16th on your calendar, which when pre-orders open for this product.

The Simpsons Arcade was an interesting game back when it first released. You could even say that it was “a product of its time”, considering how prolific the side-scrolling beat-em-up genre was in the early ‘90s. In this title, you and up to three buddies take control of a Simpsons character—Homer, Marge, Bart, or Lisa—and need to make your way across several stages, punching the lights out of anyone that stands in your way.

Like with most games of the time, the plot is as simple as can be: The Simpsons were strolling around Springfield when they bump into Smithers, who had just robbed a huge diamond from the local jewelry store for Mr. Burns. In the ensuing kerfuffle, the diamond soars through the air and lands in Maggie’s mouth, replacing her pacifier. In order to recover the precious stone, Smithers kidnaps the baby and runs away, with the Simpsons giving chase.

While the gameplay is as basic as the plot, it is quite satisfying. Every character has a distinctive fighting style, with Homer punching and kicking; Marge wielding and swinging a vacuum cleaner; Bart shredding and bashing enemies with a skateboard, and Lisa whipping everyone with a jump rope. In our opinion, this was a missed opportunity to make Lisa attack with a saxophone, but I guess we’re thirty years too late for that. Not that it really matters anyway since the game is quite fun regardless.

In their journey to rescue Maggie, the Simpsons will have to travel through eight different stages, each with a powerful boss enemy in the end. The Simpsons can use a combination of their basic attacks, as well as bash enemies with items they can grab from the environment, such as mailboxes and bowling balls, and also keep their health meters topped up by picking up and eating any of the foodstuffs scattered throughout the stages.

The game ends with a climactic battle in the Springfield Nuclear Power Plant where, after dealing with Mr. Burns’ henchmen, they get to fight against Smithers, and then against the man himself, armed with a high-tech battle suit. And after knocking their blocks off, the Simpsons rescue Maggie and go back to their usual shenanigans.

Arcade1Up’s version of The Simpsons Arcade will feature mostly the same game, even including the same graphic design as the original cabinet, but with an important distinction; it also includes The Simpsons Bowling, another Konami Game, to add some variety to the offering. And to accommodate this secondary game, the cabinet includes a trackball in the center, which is designed exclusively for use in this minigame.

The Arcade1Up The Simpsons Arcade cabinet has controls for up to two players, though it also features online play via WiFi, which lets them play in co-op remotely with other cabinet owners. And though the cabinet itself is reminiscent of the original, it’s a tad smaller, but with a much more affordable price tag than most arcade cabinets, reportedly going for about $600 at launch.

Some of the technical specifications of the product, as described in its official page, include the following: 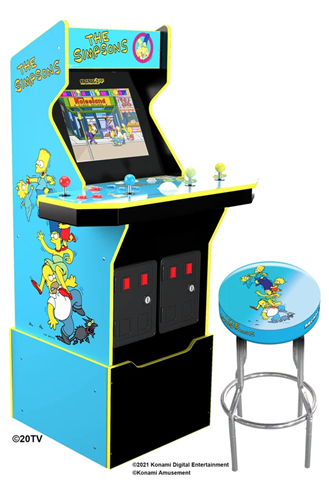 Some of these items, however, may vary depending on the retailer from which you buy it, so always read the descriptions closely to know exactly what you’ll be getting with your purchase.

And finally, as we mentioned at the beginning of this piece, the pre-orders for The Simpsons Arcade will be opening this coming August 16. If you’re interested in acquiring one, make sure to set an alarm or something because these Arcade1Up products tend to run out of stock very quickly.