When the “Golden Age” of video games came to an end in 1983, the gaming industry was affected throughout the Western hemisphere. The effects touched both the arcade and home console scene, shaping the video game business in new ways. The arcade side saw a slower recovery, however, the arcade scene got a real shot in the arm when the arcade fighting game genre, took off in the early ‘90s with franchises like Mortal Kombat and Street Fighter.

This bump lasted for a few years, but after it inspired the creation of a lot of subpar fighting titles, interest was waning again, until another unique genre was birthed in Japan – the rhythm games. Starting with Konami’s Beatmania IIDX series, the music gaming torch was soon carried by their Dance Dance Revolution franchise, which quickly found adoption at arcades all over the world.

The only reason we’re mentioning this is to highlight the importance of rhythm games in the Western arcade industry and to point out why it’s such a big deal when they still exist and are quite popular in FECs worldwide. Additionally, while there was a great deal of good things that came out of this year’s IAAPA, there was also a bit of good news for rhythm game fans in the US. In fact, for this crowd, this might just be the most important news of all: The popular StepManiaX is now coming to all Andretti’s locations, giving customers six new venues where they have a chance to enjoy some rhythm game goodness.

Released in 2017, StepManiaX is the latest creation by the Step Revolution team, consisting of LED pressure-based platforms with four buttons that users can step on to match the directions on the screen, and effectively “dance” to the beat of a variety of high-energy and upbeat songs. In essence, and for those who are unfamiliar with the genre since the original DDR rose in popularity back then, SMX is similar to Dance Dance Revolution, but it comes with some important changes and modern bells and whistles that are expected from arcade games of the current decade. In fact, the studio behind SMX is actually made up of former devs of “In the Groove” and “Pump it Up Pro,” two other popular DDR-like rhythm dancing games from the mid-2000s.

According to their website, some of the defining features of this game include the following:

You can also find this game listed on our website. Let us know if you want to add this to your location! 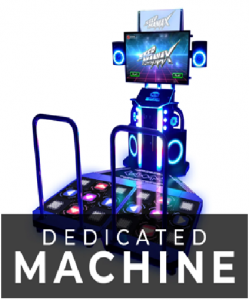 The machine itself is also top of the line, at least when it comes to arcade rhythm games, consisting of a 43” ultra-thin touchscreen monitor for navigating the game’s menus; platforms with Force Sensing Resistor (FSR) technology with automatic calibration for the best precision gameplay and without the need for constant maintenance; USB-C support for linking the stages and connecting them to the main machine, and countless more. Additionally, the stages can also be hooked up to a regular PC via the included USB-C to A cables (included with the purchase), for users that want to play the game on their computers.

Suffice to say, StepManiaX is THE rhythm game of the moment, offering the most comprehensive set of features and a compelling offer for both FEC owners with the all-in-one machine kits, as well as for domestic users with the individual stages and purchasable app. And with its wide catalog of over 300 songs, with more available via downloadable content, there is no shortage of fun in this game.

Though no formal release date for the game’s arrival to all Andretti’s locations, they should all be releasing very soon. In fact, the business posted in their official Twitter account that it was already in their Katy, TX venue, so we assume that the rest will be arriving before long.

✨With over 300+ track songlist to choose from, Step Mania X provides upbeat, catchy and energetic music that appeals to everyone!✨ Check out our very own Katy Crew Brian and Kamen’s moves! 😎 #stepmaniax #arcadegames #andrettikaty #andrettiindoorkartingandgames pic.twitter.com/yD0e15KsZi