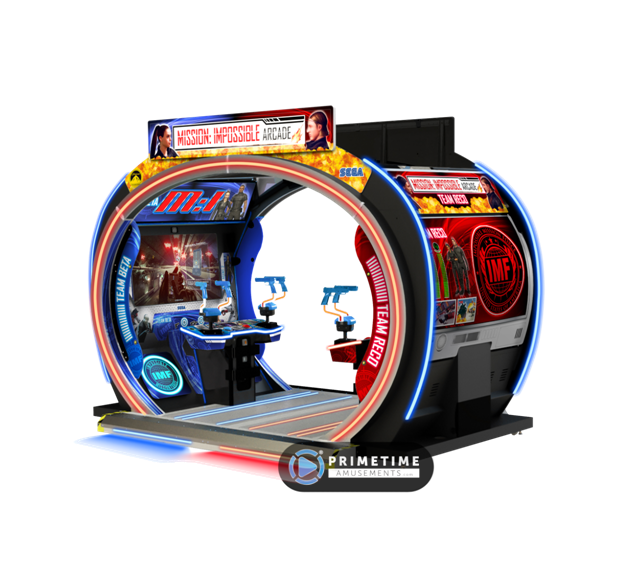 After a lengthy period of inactivity in the arcade game scene, thanks to pandemic-related setbacks and delays, Sega Amusements has finally returned with a brand new release, Mission: Impossible Arcade. This is the popular game developer and manufacturer’s first foray since they launched Mario & Sonic at the Tokyo 2020 Olympics Arcade Edition in February of 2020, which was unfortunately overlooked by many thanks to being released right as the world-wide lockdowns started. This time around, however, M:IA is bringing a whole new light gun shooting experience set in the same universe where Ethan Hunt is constantly jumping, running, shooting, and overall thwarting bad people’s plans.

However, it seems that the game’s movie references both begin and start with the title as it doesn’t feature any of the popular characters we’ve grown to expect such as Tom Cruise’s Ethan Hunt, Simon Pegg’s Benji, Ving Rhame’s Luther, or Jeremy Renner’s Brandt, among others. Instead, players are new operator candidates in one of two teams, Team Reco, and Team Beta. The idea is to complete a “final test” of sorts for the IMF, after which presumably the candidates graduate into proper agents, probably. Look, we’re speculating here as there’s really not much contextual info to go on, but that sounds about right. And in any case, we’re sure players won’t be playing this one for the story.

The objective of the game, instead of being a struggle to stop the usual convoluted plans of the big bad for world domination and/or destruction, is simply for the teams to shoot and race their way to the end of the levels. Each machine sits up to 4 players, allowing up to two couples to play in competitive matches against each other. The way this works is that, when playing in multiplayer, the teams can engage in a rivalry match to see who’s the first to reach the end, with the progress of each group displayed at all times on a bar on the top of the screen.

The cabinet itself is quite big, consisting of a huge structure designed to resemble an IMF safehouse, with two large screens on either side, and two pairs of mounted guns in each, as well as a third screen on the back of the cabinet that plays footage when the cabinet is in attract mode. Each of the lateral screens can accommodate two players, where they can engage in either solo play, or competitive gameplay if another couple’s on the other monitor. 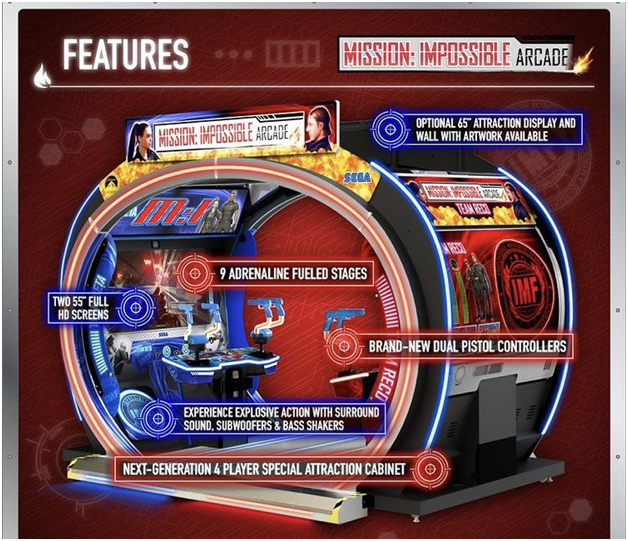 When  it comes to the action itself, we can tell there are lots of shooting sections, but also certain minigames or side tasks involving hacking, creating and using face masks, probably for infiltration purposes, and even engaging in high-speed chases, action sequences, and shootouts on fast vehicles. In other words, whenever you’re not shooting, you’ll probably be mashing the Start button, or perhaps waiting to push it at the right moment, in order to complete QTEs and continue advancing through the stage.

The new Mission: Impossible Arcade has already started shipping and you can probably find it in Dave & Busters, or some of the other large FECs, though according to Arcade Heroes’ article on the topic, it’ll probably be a while before smaller places are able to acquire it—if not for the cost of the machine itself (around $32k a pop), it’ll be for not having enough space to place this behemoth of a cabinet on the floors of smaller FECs.

If you’re interested in this machine and want to learn more about it, we suggest taking a look at Arcade Heroes’ video on the topic, which you can find down below.