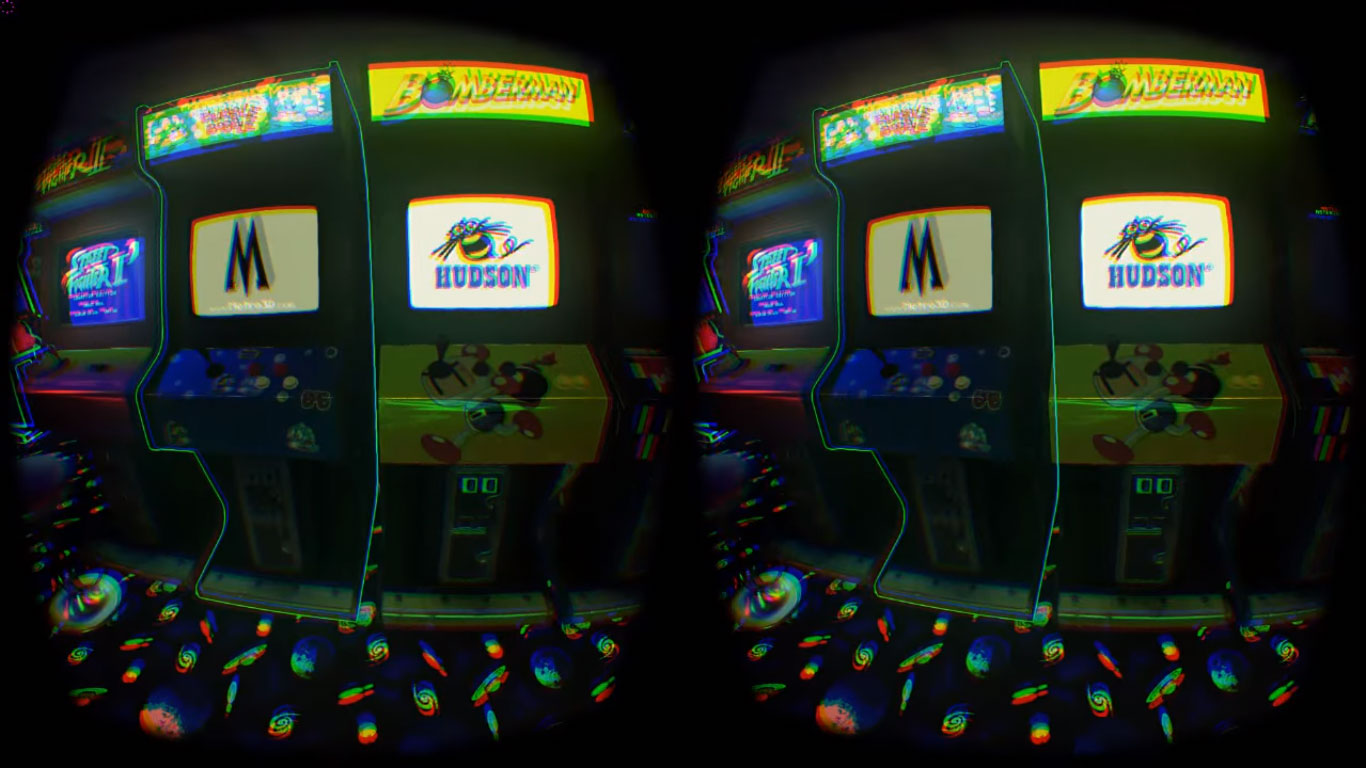 From the retro-style to retro arcade titles, the entertainment and gaming industries are adding a retro flare to new projects. The retro influence is popping up everywhere, but has the trend passed or has it just begun? We recently showcased a few new bars that added classic pinball machines and retro theming to their locations. But now the retro arcade trend is showing up in Hollywood, here’s what’s to come:

Hollywood cashing in on retro arcades

Deadline reported recently that the classic arcade titles Centipede and Missile Command were each on their way to become feature films. To recap:

Both of the shooter games launched in 1980 during what was considered a golden age of video arcade games. In Centipede, players battled against a pestilence fusillade that included the title critters, spiders, scorpions and fleas. In Missile Command, players had to protect six California cities from a barrage of ballistic missiles.

Atari will partner and help executive produce both film projects. If these two films are successful, Atari will continue to dig into its catalog of classic arcade titles for additional feature films. Imagine Asteroids, or Yar’s Revenge, on the silver screen!

Sega is also getting in on the Hollywood act with its classic arcade Shinobi. Sega is also following the Atari / Marvel studios model and partnering with the film producers to ensure their beloved title is brought to the big screen properly. They are in good hands with producer Mar Platt, who recently teamed up with Steven Spielberg and Tom Hanks in Bridge of Spies.

For those who don’t know, or don’t remember, Shinobi was released in 1987. It was a side-scrolling arcade hit, and was produced by SEGA. It was adapted for the SEGA Master System, and then licensed to other platforms. It reached the NES system in 1989. It later became downloadable in the arcades of the Wii and the Xbox 360.

The story follows a ninja, Joe Musashi. He must stop a criminal organization known as Zeed. Zeed has been kidnapping children in Joe’s clan. Joe’s goal is to make his way to the Zeed headquarters and free the hostages before battling the Boss. This covers five levels, each with several stages. The first mission has three stages, but all those that follow have four stages. There’s hostages along the way that need Joe’s help, and at the beginning of each mission the player is given vital information, including a photo of what the stage boss looks like.

One of this year’s blockbuster films Xmen: Apocalypse, features 3 new original retro arcade games, that were produced just for the film. Xmen: Apocalypse takes place during the 1980’s, and these games truly encompass that same nostalgic feeling. Luckily, X-men and arcade fans will get to play these games, courtesy of Fox Studios.

To get audiences in a real ’80s frame of mind leading up to the release, 20th Century Fox has made the Spaceport Arcade, a site full of mutant themed 8-bit games for you to play. There’s Mutant Conquest, which is essentially Pac-Man; Revenge Of Hero X, which features a character who looks a lot like Cable; and Mutant Track & Field, which is basically Summer Games, except some of the characters have a distinct advantage.

Like all ’80s games, everything in the Spaceport Arcade is both deceptively hard and inexplicably addictive.

If you want to try these X-men themed retro arcade games, head over to www.xmenmovies.com/spaceportarcade/ while they are still available.

The wave of retro arcade influences in big-budget Hollywood films runs through recent hits such as Wreck-it-Ralph and Pixels starring Adam Sandler. Yet, the 8-bit invasion of NYC didn’t begin with Adam Sandler and his pals, it was actually a viral internet short-film by Patrick Jean (watch it on DailyMotion) that racked up millions of views before the Hollywood cameras were rolling.
Both Wreck-it-Ralph and Pixels counted on arcade legends such as Pac-Man, Q*bert, Tapper and Donkey Kong to grace the big screen for familiar audiences. The original fans of these films are now the parents who are sharing these characters with the next generation of arcade fans.

If you follow the dollars, there is a huge audience now relying on retro arcade characters for their family entertainment, now in new mediums such as film and mobile gaming.

The retro arcade renaissance receive a big boost from mobile gaming platforms. The small file sizes and simple gaming allowed quick delivery and porting of these games to the new generation of mobile devices. Flappy Bird, influenced by the style and play of 8-bit classic Mario Bros, is a notable hit of the new wave of retro-styled games.

Now retro arcade titles are being used to beat Draftkings and Fanduel at their own game.
From venturebeat.com:

Sony’s GSN Games has a pretty big idea that it’s letting out of the bag today. The prize game company’s Sparcade app will let you play classic arcade games like Pac-Man and Tetris on mobile devices and allow you to win real money in contests of skill with your peers.

GSN figures that this kind of skill-based gaming, where you can wager some money against a friend in a duel, is legal in about 40 states. Fanduel and Draftkings thought they had that right as well, but a bunch of states came after the fantasy sports companies and classified them as illegal gambling. But GSN believes that the games it is using are clearly games of skill.

The world-wide audience for classics like Tetris and Pac-Man is enormous. For cash prizes and easy access via a mobile device, this new spin on classic arcade gaming at your finger tips is going to be a big hit with fans. 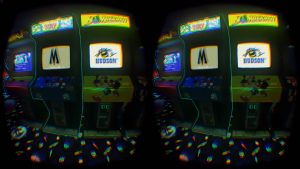 Virtual reality systems such as the Oculus Rift  have only begun to scratch the surface of their capabilities and offerings. What a great start than to recreate the classic 80’s arcade game room, complete with fully playable games.

The title is a brilliant recreation of an ’80s arcade which is populated with cabinets full of classic arcade games which actually work thanks to an underlying emulator. The UE4-based visuals are top notch, and thoughtful mini-games—bowling, darts, and a basketball arcade machine—couldn’t be a more lucky fit for today’s VR systems with motion input controllers.

It’s amazing that the most advanced gaming consoles today still rely on the simplicity and nostalgia of the golden years of arcade gaming to reach audiences. Strap on a VR headset and bring the arcade game room to you, sans the quarters and the sticky buttons.

This year’s London Fashion Week was invaded by some retro arcade favorites. Even the fashion industry is not immune from the nostalgia and style that millions have grown to love.
Dailymail offers plenty of photos of the creations:

For those who think fashion takes itself far too seriously need look no further than Anya Hindmarch.

A retro gamer’s dream, the 47-year-old tapped Pac-Man, Space Invaders and Tetris as her inspiration, emblazoning the iconic graphics onto her luxury totes.

High fashion and pop art will continue to incorporate the bold, iconic and simple style of the 80’s arcade legends. The next million-dollar painting may just feature a few of Pac-Man’s ghosts!

From Savannah to Seattle to Tennessee, retro arcade theming one of the most popular choices for new bars and restaurants featuring arcade gaming. A perfect example is the success of Barcade, a retro-styled bar and restaurant now opening its 6th location in Connecticut.
Ctnow.com has the details:

Visitors will find some of the “golden era” games of the 1980s, like Centipede, Punch-Out!!, Tapper, Tetris and Tron, said Kermizian. For guests 40 and older, “that hits [their] nostalgia sweet spot.” The craft beer aspect brings in “more sophisticated drinkers, beer geeks, older people,” he said.

But then Barcade will also see a younger audience – like visitors born in the mid-1990s celebrating 21st birthdays – who will often be experiencing an arcade environment for the first time altogether. Arcades grew increasingly less prevalent as home video game consoles like Nintendo, Sega and PlayStation became ubiquitous. Younger guests, though, may be familiar with certain classic games updated for a modern era as smartphone apps, Kermizian said.

Barcade understands the power that retro arcades have in bridging the generation gap between parents and teens during family outings. When competing for family dollars, arcades and especially retro themed arcades and locations are a sure hit.

Arcade Retro is the Future?

Retro arcade titles such as Pac-Man, Missile Command, Donkey Kong and Centipede have yet to fully saturate the market. There is a treasure trove of titles by Atari, Namco, Sega and Nintendo that have yet to reach theaters and mobile devices. With comic book films and titles reigning at the box office and at the cash register, there is room to grow for the retro arcade trend.  This is one of the best comebacks from the 80’s that is only getting started.

If you are looking for the best retro arcade cabinets and games to purchase for your new arcade location or personal collection, contact our experts at PrimeTime Amusements at 305.770.4263. Browse our arcade game catalog for more!

Be a trade show star with these arcade ideas

The 5 Most Popular Electronic Arcade Games Of All Time