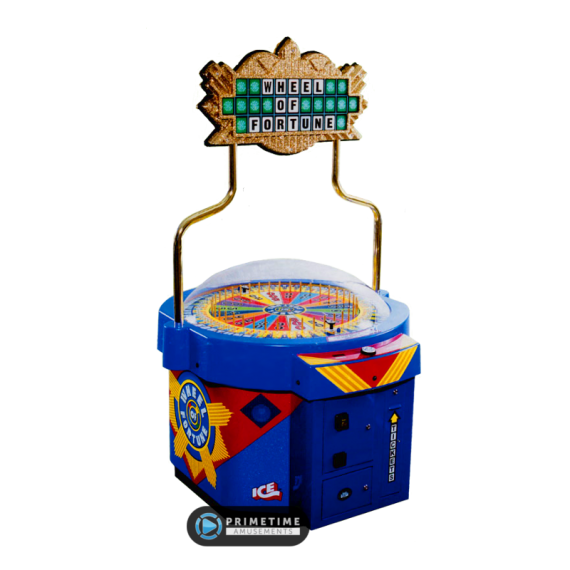 As one of the most popular game shows on television, the Wheel of Fortune has been enjoyed by generations of viewers both old and new. Bring the excitement of the show to your arcade with Wheel of Fortune by ICE (2001).

This particular version of Wheel of Fortune marked the first time that American manufacturer ICE created such a concept for arcades to enjoy, released in 2001. Since then, ICE has released a few other WoF licensed games, including this videmption title that was released in 2018.

For the 2001 game, it was modeled after ICE’s incredibly popular Cyclone redemption piece. The colorful wheel with pegs and values is found directly beneath an acrylic dome. A circle of light bulbs is located around the outer edge, with the lit light quickly racing around the game. After coining up, the user must time pushing the stop button just right to either land on the best possible value or on the “Spin Zone.” If the Spin Zone is acheived, the wheel in the center spins around to give the player a chance to win bonus tickets!

REFURBISHED STOCK: 5/9/19! – A Wheel of Fortune (2001) unit is currently available from a PrimeTime operated location in Florida. Each will go through our Certified Pre-Owned refurbishing program before shipping to you. Please call for pricing and lead time.

– Based on the exciting TV game show of the same name

– Super easy to play – just push the button to stop the light!

– Spinning wheel inside the game to reward bonus tickets

– ICE’s Wheel of fortune (2001) is no longer produced, having been released in 2001. Please call us about availability. All used models pass through PrimeTime Amusement’s “Certified Pre-Owned” program, which guarantees that the game will be completely refurbished and ready to operate upon arrival.