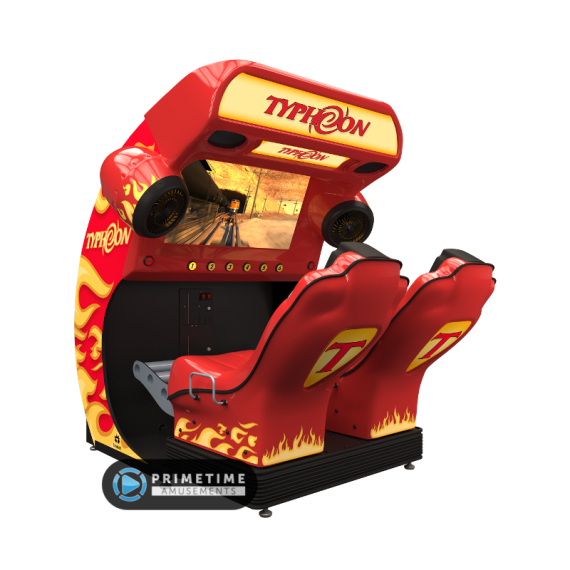 For 10 years, the Typhoon motion simulator ride has been one of the most stalwart and high earning products that could be found on an arcade floor. To celebrate this achievement, Triotech has designed a special model, called the Typhoon: 10th Anniversary Edition!

As with the standard version, 1-2 players take a seat, insert their credits, then pick from one of the available films. Then, they just sit back and enjoy a virtual roller coaster experience, with wind effects complimenting the realistic motion. The motion base has been specially designed to create a realistic, force feedback feel to the action that users see on the screen.

Check out the Typhoon: 10th Anniversary Model as seen at the IAAPA 2018 trade show in Florida. Video available in ultra-sharp 4K UHD!

With this 10th Anniversary Model, the screen has been upgraded to a 4K UHD display, and there are 10 new films to choose from and enjoy. Each film lasts for around 3 minutes, providing great excitement to riders every time.

– #1 ranked earning game at many locations for several years running

– Proprietary, high-quality motion system that produces up to 2G’s of acceleration & 400 movements per second

– Comfortable reclined seating with safety handle bars on the sides