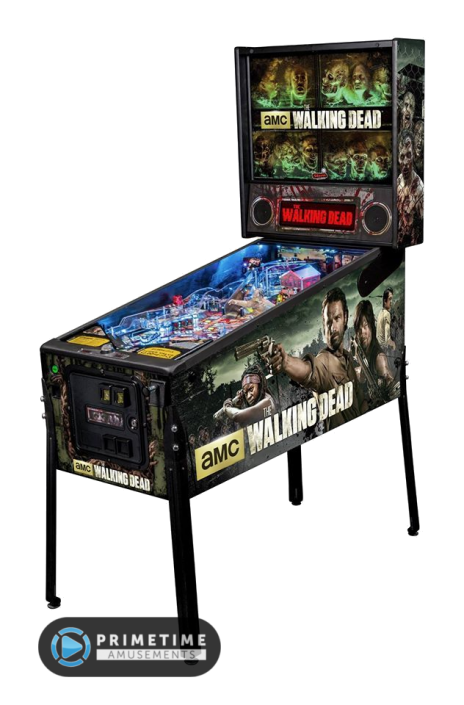 AMC’s “The Walking Dead” is a worldwide phenomenon in entertainment, based on the comic book series written by Robert Kirkman and published by Image Comics. The drama in comic form and on TV, tells the story of the times after a zombie apocalypse. With Stern’s new The Walking Dead Pro Pinball, fans can finally join in the fight to survive while playing their favorite style of game.

Players fight to survive the zombie apocalypse alongside series icon, Sheriff Rick Grimes, by battling zombies and completing various game missions. The game tracks how many Walkers that you take out, rewarding points and new modes for high range kills. The game includes multiple zombie toys for adrenalin-filled zombie battles at familiar locations from the show such as the Prison and Cell Block C. Brilliant, high-definition zombie-filled artwork heightens the player’s excitement as the dive into the zombie world.

Check out The Walking Dead Pinball Premium model in action

– Based on the popular AMC TV series, The Walking Dead

– The game keeps track of how many prison “walkers” you take out; Premium includes a special Crossbow firing feature

– Walker bash toy target inside “Cell Block C”; Walker is more detailed and has a magnet in the Premium version.

– Animations, scoring and other info is display on the red-colored dot matrix monitor

– Stern’s The Walking Dead is no longer in production. Please call us about availability. All used models pass through PrimeTime Amusement’s “Certified Pre-Owned” program, which guarantees that the game will be completely refurbished and ready to operate upon arrival. Also ask about our game rentals!