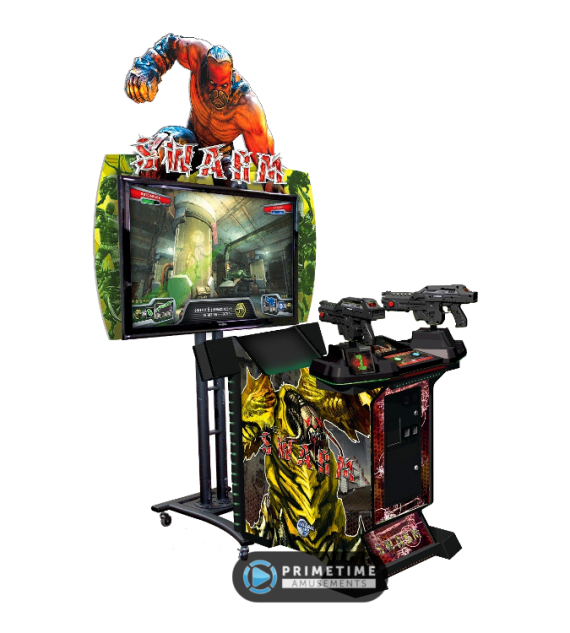 Aliens are invading Moscow and only you can stop them as you use their own technology against them in GlobalVR’s The Swarm.

The story to The swarm goes as follows: “Moscow is in shambles! Our hero must ward off an alien onslaught to save himself and the human race. With each challenge he finds himself becoming more like those he fights—and able to use their powers against them. His decisions will determine the fate of us all.”

See The Swarm in action via this manufacturer produced video

Based upon a third-person action game of the same name by Buka Studios, the arcade version has been completely reworked to provide a unique and exclusive experience. Instead of it working as a 3rd person game, it is more of a traditional first-person shooter. USers familiar with GlobalVR’s Paradise Lost will instantly get a feel for The Swarm as the action has been setup in a similar manner. Each cabinet comes with a pair of mounted force feedback guns that also have a shield and grenade button at the user’s disposal. Play through seven levels of alien infested mayhem, finding secret rooms and racking up an awesome score along the way!

– Two mounted guns controls the action; each uses force feedback and has a Shield & Grenade button (same guns as on Aliens Extermination)

– Seven levels to explore; user selectable when the game starts

– Upgrade your character with alien DNA, becoming more powerful as you play

This game is also available as a conversion kit so that operators can take a low earning title and refresh it with something new! Call us about

Universal Kit: For converting just about any old upright cabinet into a higher earning HD cabinet!

Since upright cabinets come in many shapes and sizes, the universal kit is higher priced, coming with more hardware to make the conversion work. These kits come with:

*Stereoscopic 3D is not required for the game to work, especially where stereoscopic 3D TVs have become less common on the market. If you do opt for the 3D controller kit, the technology and glasses are similar to what was used with Real3D passive glasses.