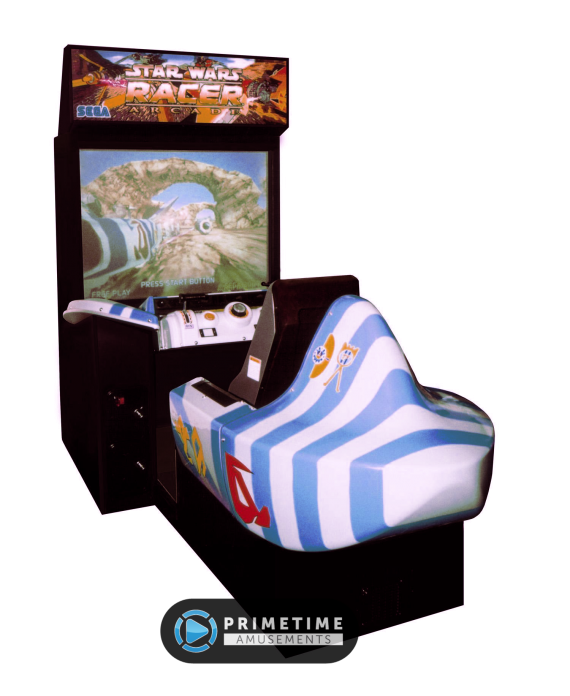 Love it or hate it, Star Wars Episode I: The Phantom Menace certainly had an influence over popular culture and among those influences is the idea of the Pod Race. Thanks to Sega, you can experience a pod race without having to leave the galaxy or risk your neck over the wastes of Tatooine in Star Wars Racer Arcade.

Featuring two steering control levers, you’ll need lighting fast reflexes to steer your podracer as you zip along one of the four detailed tracks. A Turbo button found in the center of the control panel allows you to enjoy a big burst of speed. Choose from your favorite character from Star Wars: Episode 1 The Phantom Menace including: Anakin Skywalker, Sebulba, Gasgano and Ben Quadinaros. Link up to 4 players, featuring a true stereo sound delivered through four speakers, a sub-woofer and a shock generator letting you feel every bump, scrape and crash!

– Based on “podracing” as showcased in the movie Star Wars Episode I: The Phantom Menace

– Four courses across the Star Wars galaxy to choose from

– Link up to four units for multiplayer action

– Sega’s Star Wars Racer Arcade is no longer produced, having been released in 2000. Please call us about availability. All used models pass through PrimeTime Amusement’s “Certified Pre-Owned” program, which guarantees that the game will be completely refurbished and ready to operate upon arrival.