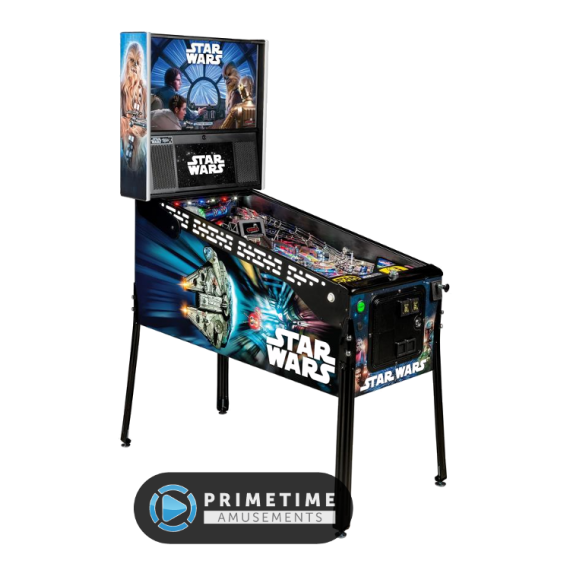 Take the journey to a galaxy far, far away once again with Stern Pinball’s STAR WARS pinball. This listing is for the Limited Edition (more commonly known as ‘LE’) model, a game that has more features than the Pro and higher collectability than the Premium.

The LE version of the game has similar features to the Premium: 2 flippers, 2 pop-bumpers w/ 1 sling; 2 steel wire ramps PLUS a unique magnet-powered Hyperdrive ramp that curves above the flippers and into the Death Star; 5 FORCE drop targets;  Tatooine Scoop target; 4 selectable game modes (Escape From Hoth, Destroy The Death Star, Escape From Tatooine, Battle Above Endor); special interactive video sequences (such as tap the button to destroy the TIE fighters on the screen); and right drain save ball feature and a 3rd button mounted to the center front of the game for additional game interactivity.

This also includes an interactive Death Star toy that will open when it ‘explodes’; a bobble TIE Fighter target; Millennium Falcon w/ LED lit engines; the aforementioned Hyperdrive ramp; a Hyperdrive ball diverter, a laser-cut jump ramp that delivers balls to the Death Star; “May The Force Be With You” electric gate and unique hand-drawn cabinet artwork not found on the other models.

LEs are limited to a production run of 800 units – when they are gone, they are gone for good. This also includes a Certificate of Authenticity signed by Gary Stern; Designer Autographed collectible featuring Steve Ritchie’s signature; Powder coated gloss black designer laser-cut side armor; Serialized number plate.

NOTE: (June 2017) – As of the moment, this game is only available for pre-order; Stern has yet to announce a shipping date. We will update the information here as it changes.

– The Star Wars LE artwork package places its focus on scenes involving the Millennium Falcon, particularly from The Empire Strikes Back; sideart focuses on the asteroid belt chase sequence from that film on the right side while the left side shows the Falcon’s daring attack on the Death Star from Episode VI

Check out the Pro model of Star Wars Pinball here or if you are looking for the Premium model, click here. 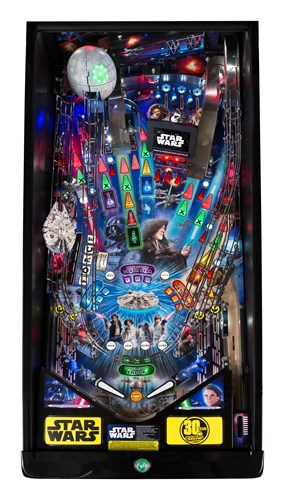