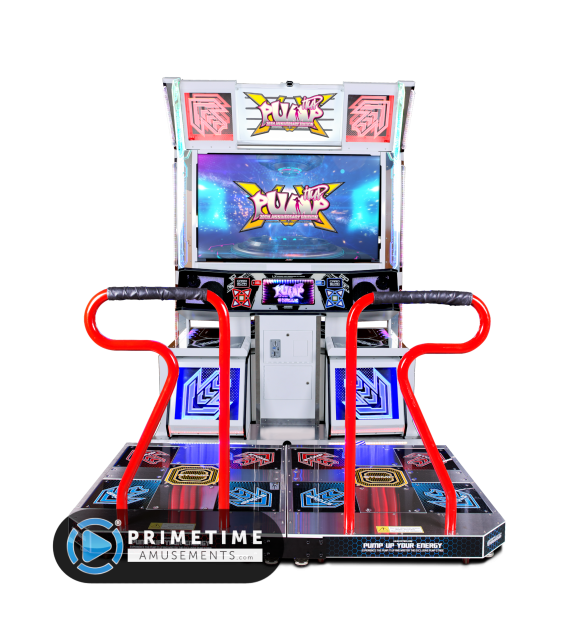 Pump It Up XX 20th Anniversary

ALSO AVAILABLE AS AN UPGRADE KIT FOR OLDER MODELS!

Dancing games are a timeless genre, having been a fixture on the arcade landscape since the late 1990’s. To celebrate 20 years of keeping people moving, Andamiro is launching Pump It Up XX 20th Anniversary.

For those unfamiliar with the Pump It Up series, it is a ‘rival’ to Konami’s Dance Dance Revolution series of games. Instead of the arrows being placed in the cardinal directions, they are placed at the diagonals. The way to play is similar – arrows will float up from the bottom of the screen, and you must stomp on the correct arrow when it overlaps the target at the top of the screen. Players enjoy a large number of electronic pop music songs, including K-Pop and several other genres. This receives an additional boost via frequent online updates and support from the manufacturer Andamiro, who also produces many top redemption games for the market.

Players have plenty to look for with this latest entry – more songs, more rewards, more characters and an online matchmaking system that connects players with similar abilities together. The software is available in Andamiro’s flagship “LX” cabinet, keeping the captivating LED lighting effects, incredible 4-speaker/2-subwoofer sound system, simple card login system and the camera. The graphics pop better than ever on the 55″ HD screen, making this one anniversary to remember!

Check out Pump It Up XX as it was shown at IAAPA 2018. Video available in 4K UHD.  Subscribe to us on YouTube to be alerted to when we upload other product videos!

– A game that is bigger, better, louder and more complete in arcades

– Tutorial beginners to learn how to play

– Designed especially for the LX cabinet design, which was also used in Pump It Up Prime 2 2017

– Biggest song list on a new PIU release ever, with over 500 songs and new songs added frequently! Check out some songs here.

– Players can purchase AM.PASS Cards to login to their account. 10 cards are included with each game purchase. Ask us about additional card packages

– New reward titles to keep players coming back for more