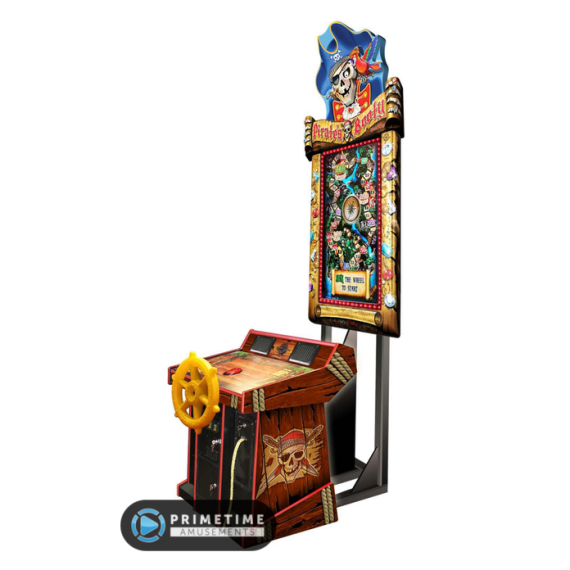 Set sail for an island of fun and adventure with the Pirate’s Booty video redemption game from Team Play, Inc.

As a pirate on a quest for riches, follow the treasure map and claim your booty on the high-definition 46″ LCD video game monitor. Be wary of the dangers along the way . . . giant apes, krakens and cannibals lurk around every turn, ready to foil your quest to win a treasure of tickets. To play, all you do is insert credits, press the start button then spin the wheel! The selection will race across the treasure map and where it stops will indicate your prize! The game uses a progressive jackpot bonus feature to drive additional play for those big ticket prizes!

This was also produced in a merchandiser/instant prize model (see in a video near the bottom).

– Exclusive to arcades with no mobile or home console version available

– Pirate Wheel controller version plays the best and earns the most

– Graphics are displayed on a High-definition, 46-inch LCD monitor

– Dual high capacity, simultaneous output ticket dispensers to ensure that the game will operate without a problem during peak hours

NOTE: Availability on this game may be limited as it was first released in 2013. Just give us a call if you are looking for it and we can find out the current status for you!