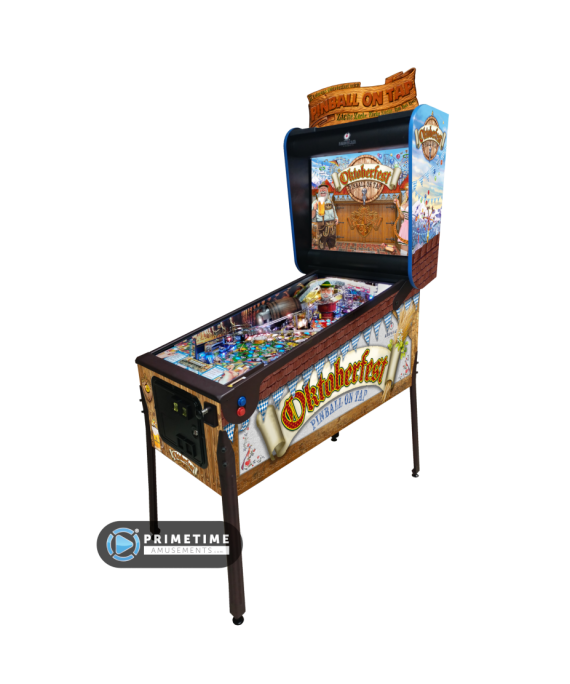 Now you can celebrate Oktoberfest all year round, and without having to travel to Germany, thanks to Oktoberfest: Pinball on Tap by American Pinball.

Oktoberfest: Pinball On Tap is a specially themed pinball machine that is based upon the beloved Bavarian beer & games festival that began in Munich, Germany, and is now celebrated all over the world.  The player goes on an Oktoberfest adventure, via the pinball, as they pick their stein and go from there. Each collectible stein features a certain power-up, allowing the player to enhance their play experience from the get-go. As they collect steins from over a dozen different tents (which are represented on the playfield itself), increase your score, perks and excitement! Each tent has a different theme or activity to enjoy, with Otto the Bartender (as a large, interactive toy) overlooking the fun.

Oktoberfest has three flippers, three slingshots, three pop-bumpers with bumper cars on top of each, four magnets (including two “MagNab” user controlled magnets that can be activated using the extra set of buttons on the game), RGB LED lighting, plenty of game modes & multiballs, ball locks and multiple ramps including the Corkscrew Rollercoaster, which features two loops and a zig zag!

– Attend an Oktoberfest at any time of the year, collecting virtual steins as you play

– 3 flippers, slingshots and pop-bumpers; plenty of ramp action (including a ramp that raises & lowers)

– 15.6″ LCD integrated into the backbox for game info, animations, and more

– RGB LED lighting throughout the game

– Custom soundtrack that adapts to the Tent mode you are playing, pumped through 6 stereo speakers and an 8″ subwoofer

– Variety of operator adjustments, including free play for home collectors