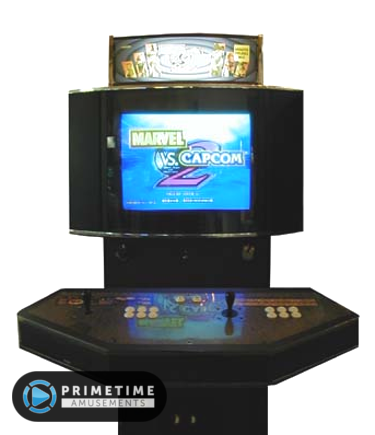 CLICK HERE TO DOWNLOAD/VIEW THE MARVEL VS. CAPCOM 2 FLYER (JPG)

Like Marvel Vs. Capcom, this brings together characters from the Marvel and Capcom universes as they battle for supremacy, increasing the roster to a staggering 56 playable characters. That roster starts out at 28 with a ‘fresh’ game, the others unlocking as the game gets played. If the memory is reset, then the roster returns to 28.

The controls are standard fighting game fare (1 joystick + six buttons per player) which any user familiar with a fighting game can easily pick-up and play. Marvel Vs. Capcom 2 also innovated the idea of 3-on-3 tag team battles by  adding a “Delayed Hyper Combo System”, which allows skilled players to link all three of their character’s super moves into one mega destructive force.

This listing is for the Marvel Vs. Capcom 2 arcade game installed inside of a “Showcase” cabinet. These originally came with a 33″ CRT monitor and ships in two pieces (monitor portion and control console portion). We can convert the monitor to an LCD for an additional cost if wanted. All used games that we sell come to you fully refurbished and with a 30 day warranty.

What Makes Marvel Vs. Capcom 2 Special?

– Character roster reached 56 when all are unlocked

– Original showcase cabinets ship with a 33″ CRT. Ask about conversion to a modern LCD monitor!

– Capcom’s Marvel Vs. Capcom 2 is no longer produced, having been released in 2000. Please call us about availability. All used models pass through PrimeTime Amusement’s “Certified Pre-Owned” program, which guarantees that the game will be completely refurbished and ready to operate upon arrival.

Check out Marvel Vs. Capcom 2 in action: