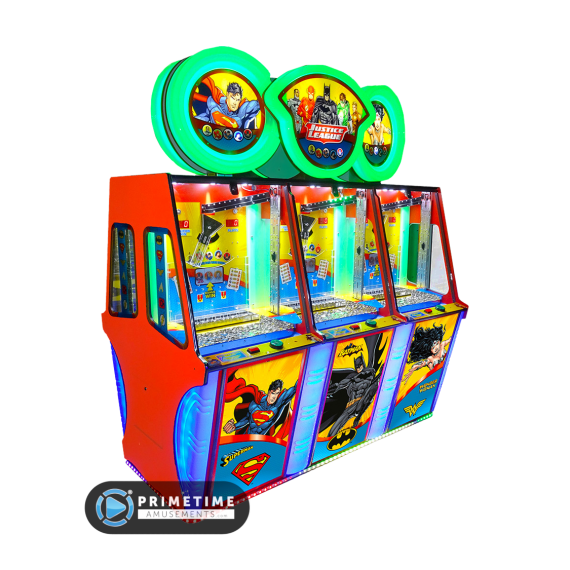 Sporting six different player stations, the Justice League pusher takes all of Coastal’s previous experience in developing high earning coin pushers and packs it into this game. Made to look like a banked row of coin pushers, the Justice League is actually one piece, with six player station (3 stations, back-to-back).  Each station highlights iconic superheroes from the DC Comics universe, such as Superman, Batman, & Wonder Woman. Other characters like Aquaman, The Flash and Cyborg are also found on surfaces like the game marquee.

Justice League runs on a closed loop coin system, which means that users don’t insert their coin/token into any slot – it’s completely self-contained. After entering a credit, push and hold the “Skill” button to move the central coin chute back and forth, where several heroes are placed. Then push the “Coin Play” button to drop the coin. Depending on which targets become lit, you can win ticket bonuses and even linked bonuses from the other stations!

Check out Justice League from the game’s debut at IAAPA Expo 2019. Video available in 4K UHD; subscribe to us on YouTube to stay up-to-date with the latest product videos!

– Attractive multi-color LED fixtures for the marquees and base cabinet

– “Closed loop” coin system means that you never have to restock the machine with coins; no payout worries

– Easy for users to play; great for kids

– Red numerical LED displays show game info such as how many plays have been credited & tickets won.

– Small LCD shows the Bonus Win characters  (villains to match with the heroes). Spin this by hitting one of the two targets below

– Coin or card swipe compatible. Please specify which is needed at the time of purchase; card swipe versions may be a higher cost