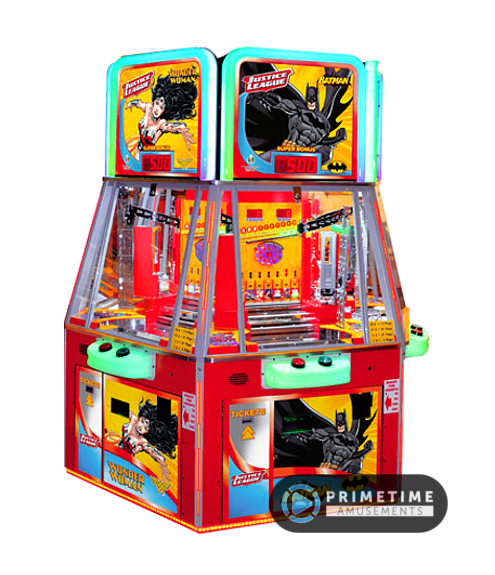 Sporting six different player stations, the Justice League pusher takes all of Coastal’s previous experience in developing high earning coin pushers and packs it into this game. Each station lies under a superhero character from the DC Comics universe, including Superman, Batman, Wonder Woman, Aquaman, The Flash and Cyborg. Users insert their coin/token into the slot on the right hand side. AS it goes down the ramp, you have two choices: wait and watch where it lands OR push the Coin Drop button to remove the floor from under the coin so it falls below. There are a total of seven targets (each with an image of a superhero as a part of it) which is used for winning higher ticket values. The coin will then drop to the pusher bed below.

Check out the Justice League coin/card pusher in action from IAAPA 2017. Available in 4K UHD!

While users can win tickets, what will drive users for repeat plays are the collectible cards on the inside of the game. If one falls, it vends below!

– Easy for users to play; great for kids

– Red numerical LED displays show game info such as how many plays have been credited, tickets won, and the Super Bonus.

– Coin or card swipe compatible. Please specify which is needed at the time of purchase; card swipe versions are a higher cost