You’ve certainly heard about Virtual Reality, more commonly known as “VR”. But do you know about Augmented Reality (AR)? To put it in a nutshell, AR is similar to VR but maps digital objects into the real-world. This allows you to use your surroundings as a game, with digital objects thrown in to “augment” the experience. Think Pokémon Go as an “entry-level” game for AR entertainment.

Check out the Hado AR system with PvP and Hado Kart as seen at Amusement Expo 2018.

Now thanks to Meleap’s HADO Entertainment System, you can operate amazing and exclusive AR games at your facility, today! This listing is for HADO PvP, a six-player multiplayer arena battle game.

In HADO PvP, players don Apple AR Head Mounted Displays (HMDs) and a movement tracking wristband. With three warriors per team, you are then thrown into the arena space where they get to cast virtual magic spells such as fireballs at their live opponents. Use your shield to block attacks and keep your “life leaves” in play. If you lose four leaves, you are out. Each team has six minutes to deal out as much damage as possible on the opposing team, whoever has the most life at the end of six minutes comes out the victor! Think of it as Dragonball Z meets dodgeball!

HADO has already been installed at various locations around the world, with venues that have seen excellent revenues thanks to the unique nature of the hardware and software system. Operators can customize the appearance of their arena and promote tournaments, which can be tied into various eSports events that HADO is sponsoring.

What Comes With A HADO PvP Package?

Please refer to this chart below. Note that HADO AR units do operate differently than a typical arcade machine. This experience requires an attendant to assist and keep an eye on customers to prevent gameplay issues or injury, also to clean the HMD units between use. Locations are also expected to prepare a space that is at least 20′ wide x 25-32′ long along with other preparations mentioned here: 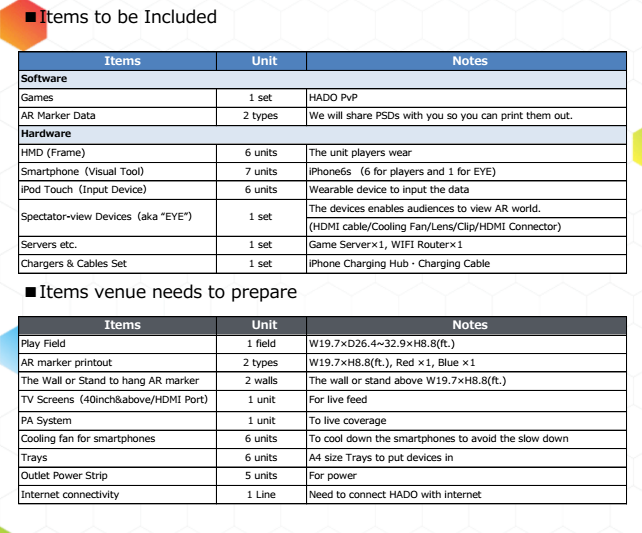 Please let us know if you have any questions about the specifications above – we are happy to help!

Beyond the PvP game mentioned above, Meleap has been busy developing additional experiences to appeal to more venues and situations. These are also available now but are offered at different prices and may require additional equipment and space requirements compared to the above. These include:

HADO KART – Take your kart race to the next level with Augmented Reality! Users drive around on real karts while the HADO system adds digital elements to make each kart battle a unique form of entertainment. This is currently the most requested HADO AR game on the market! Watch a video of this game by clicking here.

Monster Battle – Live out your Japanese anime battle fantasies by wielding magical firepower against giant mystical creatures. Click here to see this one in action.

Check out a typical Meleap HADO PvP match from the manufacturer as they hosted an eSports event to drive interest and play in their system: