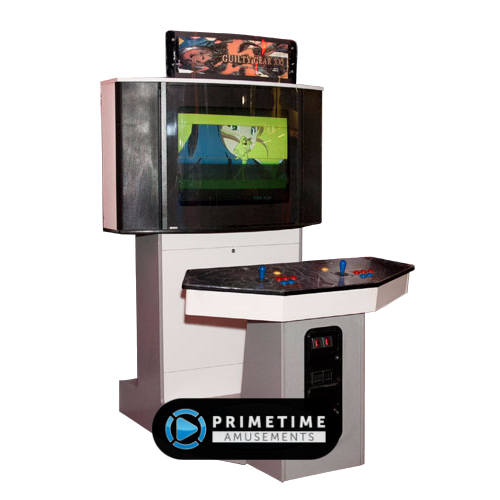 The Guilty Gear series is a 2D anime-style fighting game developed by Arc System Works and Sammy. Guilty Gear XX marks the 3rd primary installment of the franchise as released to the Sega NAOMI GD-ROM platform.

The story of this game revolves around a fighting tournament designed to find humans skilled enough to thwart the Gear threat. In Guilty Gear XX, most of the story follows ‘That Man’ henchwoman I-No as she pits the different rivals against each other to sow discord. Take over 20 playable fighters, with 6 outrageous new characters in this fast-paced and beautifully designed video fighting game.

This was released as a kit to the US market so the cabinet style that it is available in will vary. Pictured is a ‘Showcase’ cabinet but it also could operate in a standard NAOMI wired cabinet. Our expert technicians can handle this (when units are available), ensuring quality with your purchase!

– Chose from 20 characters, each with their own backstory and game plotline

– Graphics displayed on a CRT monitor (sizes vary); ask about conversion to a modern LCD!

– Arc System Work’s Guilty Gear XX is no longer in production, having been released in 2002. Please call us about availability. All used models pass through PrimeTime Amusement’s “Certified Pre-Owned” program, which guarantees that the game will be completely refurbished and ready to operate upon arrival. Also ask about our game rentals!