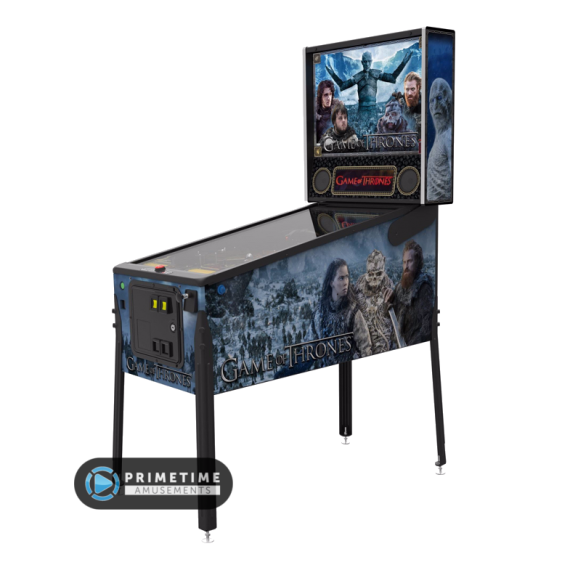 The epic stories of kings, knights, knaves and dragons are playable as a pinball machine with Stern’s Game Of Thrones pinball games. This listing is for the Premium model.

When you begin a game, you can choose to be a Knight of the Stark, Lannister, Greyjoy, Baratheon, Martell, or Tyrell family Houses. then you pick other Houses to battle. Game of Thrones actor Rory McCann as Sandor Clegane (The Hound) guides the player throughout the game with authenticity and strong presence. The ultimate goal of each game is to become the ruler of the seven kingdoms of Westeros.

Players can win valuable random awards and features with a fun new software feature called Reel Pops(tm). You do so by playing the Pop Bumpers and spinning three virtual spinning reels on the display. When three identical symbols line up, the player is awarded the prize shown on the reels. Earn Gold and spend it on needed weapons and features. An Action Button is featured on the front molding for the largest array of interactive play features ever seen in a pinball machine.

The Game of Thrones Premium model includes all the above features but is very different from the basic Pro model. Premium models feature a massive and challenging Castle upper-left playfield with a second set of full size flippers, shots and an animated Dragon. Both models feature dazzling, full-playfield, color-changing LED’s throughout the game. An Elevator serving two “floors” brings the ball up to the Castle where the players battle against Houses and Dragons. The second Elevator floor delivers the ball to the Iron Throne, where victories great and small can be celebrated. Amazing light shows and effects are a visual celebration of players’ victories. Click here to download/view the Game Of Thrones features matrix, a handy way to compare features between the three models! (PDF)

– Based upon the wildly popular HBO program, Game of Thrones

– Game scoring, information and animations are shown on the red dot matrix display

– Also available as a Pro and Limited Edition model

– Stern’s Game of Thrones Pinball is no longer in production, having been released in 2015. Please call us about availability, but note that we infrequently come across pinball machines. All used models pass through PrimeTime Amusement’s “Certified Pre-Owned” program, which guarantees that the game will be completely refurbished and ready to operate upon arrival.

Check out Game Of Thrones in action from our friends at Arcade Heroes: