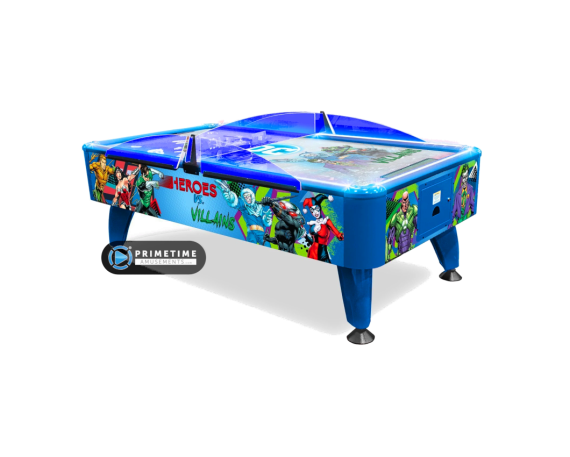 Following in the footsteps of their Justice League air hockey table, Bandai Namco Amusements America now has both sides of the coin to offer with DC Heroes & Villains. Available in both coin-operated and non-coin models.

Like the Justice League table, it provides commercial grade air hockey excitement with a sharp look, but now includes some of the iconic villains on the artwork instead of just the iconic heroes. These include Superman, Batman, Wonder Woman, The Joker, Mr. Freeze, Harley Quinn, and more. The basic operation of the table is the same as other hockey units – insert credits, then control the puck with your mallet in an attempt to get the highest score before the time runs out. This experience is enhanced by the high quality comic book artwork found integrated into the playfield and on the sides, along with spectacular LED lighting found in the playfield, edge rails and within the legs. One innovative feature that is reused from the Justice League table is that the playfield will light up red or blue to let everyone know who has scored. This game also plays exciting, heroic music during each match, enhanced by “action” sound effects for when the puck hits the table edges.

Check out the older (and no longer available) Justice League air hockey table from it’s first appearance at IAAPA 2017. HOME/NON-COIN EDITION Shown; We will post footage of the new version when possible.

– Features high-quality comic style artwork with Heroes on one side, villains on the other

– Stunning LED lighting combined with translucent surfaces are integrated into the edge rails, table legs and under the surface.