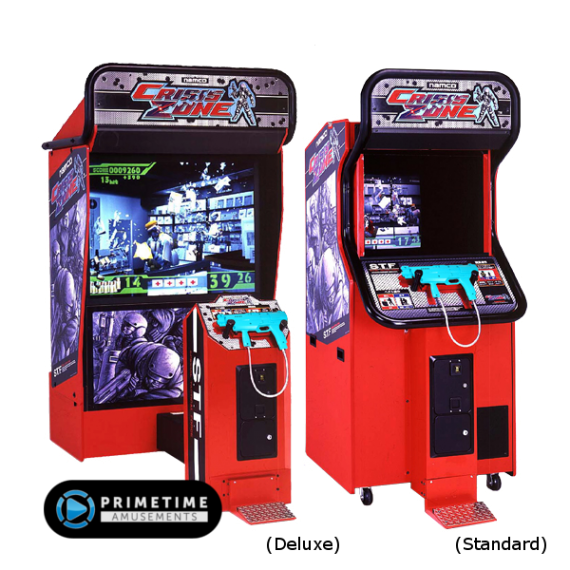 Crisis Zone is an action packed shooter from Namco, spinning off from the incredibly popular Time Crisis series.

Join the elite special forces as they fight to take a shopping center back from hordes of well armed terrorists. You are a one-man army, armed with a trusty automatic machine gun and a bullet-proof shield. Reload and take cover by taking your foot off the pedal but don’t take too long to dispatch of your enemies as the clock is ticking!

See Time Crisis in action from our shot-on-location video

Crisis Zone takes place over three levels of heart pounding action. Finish the game on 1 credit and have your initial emblazoned with a star to show off your achievement!

– The game saves the top five scores for the leaderboards

– The game was produced in two models: standard and deluxe.

– Namco’s Crisis Zone is no longer produced, having been released in 1999. Please call us about availability. All used models pass through PrimeTime Amusement’s “Certified Pre-Owned” program, which guarantees that the game will be completely refurbished and ready to operate upon arrival.