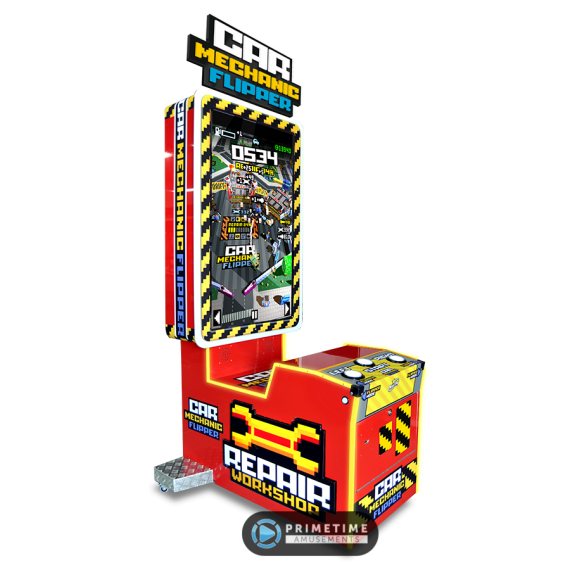 Looking for something different? Then Magic Play has you covered with Car Mechanic Flipper. You certainly won’t find a video pinball game like it anywhere else!

Based on the mobile/PC game by PixelFlipper, Car Mechanic Flipper combines the concept of a video pinball game with a car mechanic game. Instead of smacking a silver pinball around a table hitting targets, you are ‘fixing’ a car by hitting it around a city featuring different targets that can repair it. Collect fuel to drift around the city. Play mini-playfields, unlock tool-shops, buy tools to soup up your car and do other crazy stuff. All of that nicely packed as an old school arcade pinball game with a voxel (3D pixel) look and feel.

This operates as either a video game or a video redemption title and controls like a pinball game too – use the buttons on the left/right sides of the cabinet or the giant tap buttons on the top of the control panel.

– Based on the unique home game of the same name

– Pinball with a true twist – hit a car around instead of a ball!

– Appropriate for all ages – play for points or for tickets!

– Ships with a single ticket dispenser

– Ships with a coin acceptor; ask about card swipe