So you’re in that part of every arcade gamer’s life where you finally want to make the big leap and build your very own gaming room. First off, good for you for wanting to pursue your hobbies and further increase your enjoyment of the fantastic world of arcade gaming. Now, supposing you have the necessary funds and space, you will still need the know-how to tell which games will give the best cost-benefit ratio, as well as be better-suited to stand the test of time without getting stale or boring a few months in. This article will be dedicated to listing the most popular arcade games that most of our customers purchase for their domestic gaming. Additionally, we will also be giving insight on our personal picks for best amusements for this very same purpose. 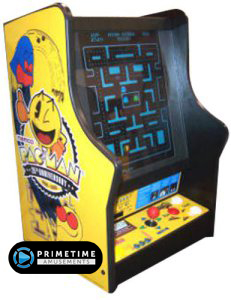 Pac-Man has always been an interesting specimen to behold. Its simple game-play originated in a time where it would be regarded as the epitome of modern gaming (the 80’s were far simpler times for gaming). Consequently, the series of games based on our puck-shaped protagonist have garnered massive fame and a following bordering on cult status over the years. To this day, the Pac-Man games are still hot in most local arcades, where the users line up to beat each other’s high scores, and generally have a good ol’ time.

Pac-Man machines have always been a great addition to any gaming room. The combination of easy game-play mechanics, coupled with great replay value (no two matches ever play out the same) makes it easy for anyone to pick up and enjoy a few quick games. The hardcore gamers will also have tons of fun as they polish their skills to a mirror sheen in hopes of beating the world record.

In our experience, most users that are looking to purchase a Pac-Man game for their game rooms often pick up a Pac-Man’s Arcade Party machine, which includes 13 awesome arcade games, including a couple Pac-Man titles. For the price of one arcade cabinet, you will be receiving these games:

You really can’t go wrong with this one. 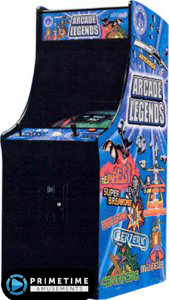 As you may have guessed, the good amusements for arcade rooms are the ones that offer the best games; what a no-brainer, right? However, the very best arcade cabinets for gaming rooms are those that also feature several games in one, effectively maximizing the buyer’s investment. The Arcade Legends 3 is one of such machines that, in a single cabinet, offers 130+ awesome games for the user to enjoy. With the Arcade Legends 3 Game Pack, the selection can be upgraded to a whopping 145 titles. All of these games are presented in a stunning 26” LED display, and with a very user-friendly menu which was exclusively programmed for this machine.

Some of the titles included in this cabinet are Asteroids, Arkanoid, Armored Car, Berzerk, Space Invaders, Warlords, World Class Bowling, and a vast selection of Golden Tee Golf courses, among others. With the same controls that you find in modern arcade games, this game nails the “arcade feel” that you are looking for. 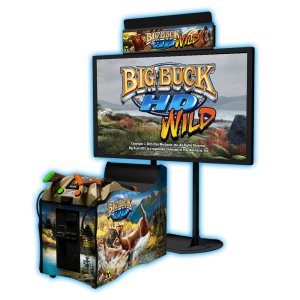 The original Big Buck was first released in 2000 by Play Mechanix, and consisted of an arcade hunting game where the player had to go on treks to hunt several creatures. This game was highly praised due to its engaging game-play, which in turn spawned multiple sequels, including Big Buck Hunter II: Sportsman’s Paradise, Big Buck Hunter: Call of the Wild, Big Buck Hunter Pro, and a bunch of other titles that upgraded the game-play and variety of the original.

Big Buck HD was released in 2012, and featured elements from Big Buck Hunter Pro, and Big Buck Safari, but this time in stunning HD . The success of the franchise even spawned a World Championship Tournament, with regional and qualifying matches held yearly on August and September, and the tournament itself on November in the windy city of Chicago (as a note, you can only participate in those tournaments by playing the game at a local bar or arcade; the home versions do not offer the online features).

I guess it goes without saying that, as far as arcade shooters go, Big Buck HD offers some of the best game-play out there. With the ‘Wild’ update, you can add more animals as well as a Duck Dynasty or ‘Doe of the Dead’ mini-games (these are an additional cost). If you’re into game hunting as well, then this machine is a definite must-have for you, as it will allow you to skip the hours of travel and trekking through the mud, and throw you straight into the action. 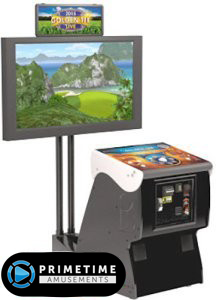 We already mentioned Golden Tee as a title featured on the Arcade Legends 3 machine. However, true Golden Tee fans will also want to have the latest edition of their own dedicated golfing machine in their game rooms. For those that don’t know, Golden Tee, as the name suggests, is an arcade golf game that takes the players through numerous courses and venues. In true golf fashion, the objective is to clear the courses with the least amount of strokes possible. Golden Tee has revolutionized the game-play of this gaming genre due to its unique feature: the trackball. This tool adds a new layer of skill to the game, and is used to determine the power, direction, and curve of each shot.

Due to the trackball, the skill ceiling of the game reached an all-time high, spawning regional and world tournaments where players can win hard cash by being good at the game. Home versions do lack the prize/cash tournament play but they do feature everything else you love about Golden Tee. They even have their own website, where you can read all about the tourneys, as well as find out how to compete in one yourself. 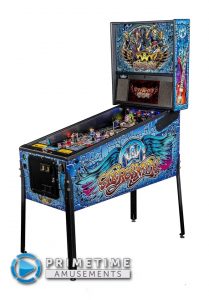 Though not entirely video arcade machines, Pinball has also been a popular game ever since its inception with flippers in the late 1940s and later after being legalized in places like New York City in the mid-70’s. I believe Pinball itself requires no introduction, but in case you’ve been living under a very large rock over the past century, the objective of the game is to launch a steel ball through the field of play using a pair of flippers. The ball can be launched into doors, bumpers, sliders, and many other obstacles which grant points to the player. At the end of the game, the points are tallied and, if the player got a high score, his name can be registered for everyone to see.

Nowadays, most Pinball aren’t solely about blindly gathering points. Instead, some games feature story-lines and objectives which the player must clear in order to advance to further stages (often represented by visual modifications to the playing field) and, ultimately, beat the game, upon which it is reset to the initial stage for the player to beat again. Granted, the player is still gathering points while all of this is going down; the main difference between old and modern Pinball games, barring the fact that the latter often feature newer technologies on the board, is focus: while the former mainly revolved around getting a high score, the latter is more about beating the game (and racking up points in the process).

Nevertheless, at the end of the day, the high score is all that matters.

As you may have gleaned from our entries, we mostly feature games that, in true arcade fashion, often offer sheer replay-ability versus other games’ deep and winding story-lines, such as those in console or PC games. This is because the machines that are best suited for domestic game rooms are the ones that won’t ever get stale of boring to the user. No two matches of Golden Tee, or Pac-Man, or even Pinball are alike, and thus offer infinite replay-ability to the true fans of said games.

That being said, there are other amusements out there that are also great for this very same reason. These are mostly parlor games, or tabletop amusements that, in some cases, don’t even require electricity to function. Here are a few: 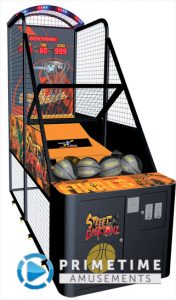 These amusements are highly popular, and are often sought out by users looking to complete their gaming room. This is understandable; after all, who wouldn’t want their very own B-Ball machine in their own house? Sadly, the main factor against owning these machines is due to space, or lack thereof. That’s right, despite being sought out by many, the truth is, few have enough space in their houses to fit a Basket Ball machine, and even less have the necessary means to get it into the room in the first place. If you’re looking for a B-Ball court for your gaming room, be sure to contact an expert on the matter, as he can provide valuable insight on the best court for your requirements, as well as the most efficient means of actually getting the machine to its final destination.

No, we’re not talking about Scrabble, or Clue. We’re talking about arcade or parlor games that can be easily played by yourself or with some friends, and that offer the most bang for your buck due to their replay-ability. Depending on your preferences, you might want to include a tabletop game such as pool, foosball, air hockey, or even Darts to your gaming room.

But remember, before making any sort of purchase for your gaming room, be sure to contact an expert on the matter, as he or she can help to save your valuable money and a world frustration in the long run. Not only will you get the best games for your preferences, but you will also build your man cave in the most efficient and cleanest way possible.

That being said, here at PrimeTime amusements we’re always at the forefront when it comes to arcade game sales and rentals. If you’re looking for a machine in particular for your game room, or simply need guidance to get started, feel free to contact us at 1.800.550.0090, or pay us a visit at 5300 Powerline Rd, Suite 210, Ft. Lauderdale, Florida, 33309.

Our knowledgeable agents are always happy to be of service.