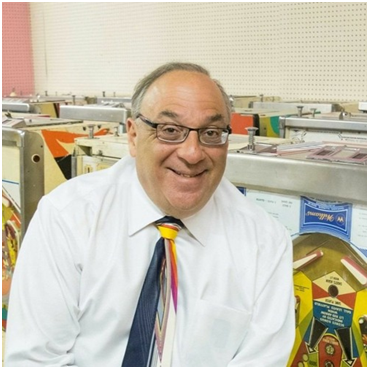 The relatively small town of Girard in Ohio, with a population of just under 10,000, is going to get a heaping helping of arcade gaming goodness, as one of the largest buildings in its downtown area is being repurposed to function as a brand new pinball arcade.

The project is named “Past Times”, and is spearheaded by long-time pinball machine collector and owner of Warren’s Berk Enterprises, Rob Berk. This new locale is going to be opened in the old IGA grocery store building, down in 419 N State St, which is a suitably large place for an equally-as-large collection of arcade games and amusements. Berk has been an avid pinball machine collector, with over 50 years in the trade. His repertoire consists of over 350 machines of different shapes, styles, and sizes, and even includes the largest pinball machine ever made, as well as other interesting and unique models.

Among Berk’s collection of machines we can find interesting standout models like flipperless cabinets from the 1930s, as well as the first ever flipper-based pinball machine originally released in 1947, the Humpty Dumpty. Novelties aside, with these many machines in one place, there’s probably a little bit of something for any type of gamer. And as long as you’re a pinball enthusiast, you’re very likely to find something that catches your eye.

In explaining the reasoning for opening this new business to a WKBN correspondent, Berk claimed that he felt that he was getting older, and as his collection grew, he no longer had a place to enjoy the games that he had been gathering for over 5 decades. “I’m getting older and older and yet I don’t have anywhere to play these games and appreciate these games. So I figured the time was right to buy a place or build a place where I could put all the games in and enjoy my passion,” Berk said.

Berk’s Past Times pinball arcade will operate with a business model of “pay once, play as much as you want”. And while the locale still doesn’t have an opening date, it’s shaping up to be a haven for arcade and pinball lovers. Feel free to check out the original article on WKBN’s website to learn more about this developing endeavor.