Maximum Tune is one of the most celebrated arcade racing series in the industry, with its inception dating back to 2001, but it’s roots firmly planted in Namco’s Pole Position, Final Lap and ultimately their Ridge Racer series. When it evolved into Maximum Tune, it took the concept to a new level, going beyond staples like time attack, versus modes and a story, to offer the concept of tuning your vehicle.  This crafting element gave the game more of an RPG feel than your typical arcade racer, and it went a step further by being the first arcade racer to let a second player challenge another racer while they were playing in a one-player mode, effectively allowing for drop-in multiplayer races to take place.

For those who are unfamiliar, Wangan Midnight: Maximum Tune (the Wangan Midnight part of title mainly being used in Japan) is basically an ubiquitous series of arcade games that you’ve probably seen many times if you’ve visited an FEC in the past few years. It gets the first half of its name from the manga series it’s based on, which is where the CPU characters from the story mode come from. Meanwhile, the second half of its title comes from the innovative memory cards (Banapassport Player Cards) dispensed by the machines, which the players can purchase either from the game itself, from the MT kiosk stall, or from the front desk, and through which they can register their tuned-up vehicles so they can save their data and even transfer it when playing on other machines.

Two decades since it first landed on the scene, the series is still going strong, with its latest title, Wangan Midnight: Maximum Tune 6RR launching in Japan & Oceania regions this past December. North America enjoyed Maximum Tune 5 (without the Wangan Midnight name) back in 2017, but due to the pandemic, it saw a major delay in the game updates, DX and DX+, until now. As of you reading this, Bandai Namco Amusements have released upgrade kits and launched the servers for the 5DX+ update, available to add to any existing Maximum Tune 5 arcade machine. Said kits are available in twin and quad sets (the same as how the dedicated units are sold); Dedicated Maximum Tune 5DX+ machines are currently available to order and will begin shipping in February.

Some fans have been perplexed by being a few versions behind Japan, but Bandai Namco did consider this – after looking at some mostly negative feedback on the 6th entry, but very positive feedback on 5DX+, they decided to put their attention to that version instead.

While MT5 DX+ is essentially the same game, at least when it comes to the core gameplay and mechanics, the upgrade brings a ton of new content, including 24 new vehicles (licensed, of course), 4 new courses, a variety of new parts that players can used to dress-up their vehicles, and several different additions to the title’s many game modes. The upgrade kits themselves, despite shipping a bit earlier, went live on the 12th, upon which operators could connect to the network and actually enable their machines for gameplay.

If you are interested, you can also check out our own product listing for the title to learn more about the game and how to order. Remember that this title supports up to 4 players, with four single cabinets linked together; It is also available in a duo/twin configuration. Regardless, this upgraded version still comes with the same monthly network fee of $75 per seat, which is collected by the developer for maintaining their network, as well as to cover the development expenses of current and future content. 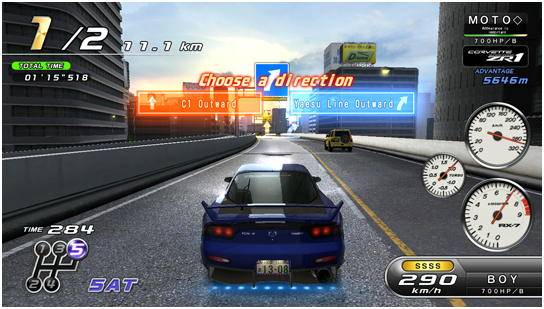 One last thing to note about this upgrade has to do with how the saved data transfer will work. As Arcade Heroes pointed out in their article on MT5 DX+, players will have a maximum of one year to transfer their old MT5 data in their memory cards, to the updated DX+ format. Users can do so by scanning them in any upgraded machine. Failure to do so after a year will lead to their data no longer being recognized by the network, basically deleting all their progress. And though this shouldn’t happen if the operator updates their MT5 to its DX+ version in a timely manner (there’s literally no reason not to), those who are thinking of delaying the upgrade might want to keep this in mind.