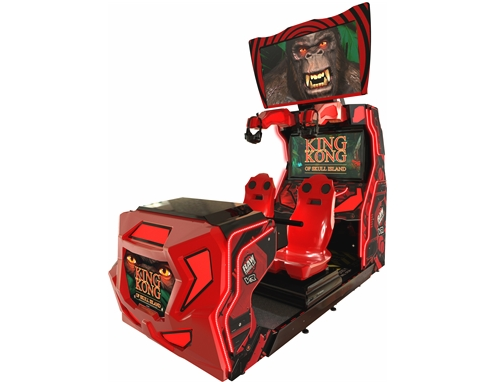 Earlier last year, we talked about how Raw Thrills was venturing into the field of VR with their newest title, King Kong of Skull Island VR. First teased at IAAPA 2019, rumors have been circulating for several years prior that the arcade game dev giant had been experimenting with VR technology. The game was first seen in action at Amusement Expo 2020 in March of last year, but the game had to wait for the pandemic to cool off before gamers could get a chance to enjoy it.

Fortunately with things slowly turning around as vaccines get out to the public, King Kong of Skull Island VR is finally being shipped (click here to find our detailed product listing for it, in case you are interested in ordering). This is a great moment for the franchise, particularly with the release of Godzilla vs. King Kong right around the corner and shaping up to be a day-1 blockbuster. If we had to guess, it’s no coincidence that the game started launching just now in anticipation of the film premiering on March 31st.

Raw Thrills is sparing no expenses with this entry, considering that it’s their first VR title. The cabinet features Dual HP “Supercomputers” to power the gameplay and two sets of HP Reverb G2 for the virtual reality aspects. For added immersion, they also designed this game with motion seat technology and sensors that detect hand movement so that players can interact with the virtual jungle environment.  Given that the non-interactive Virtual Rabbids: The Big Ride (LAI Games) has long dominated the earnings charts, we’re guessing that King Kong of Skull Island VR will soon take its place.

Check out the video trailer for the game to learn more about its features and what the game is about:

The announcement of the game’s launch came in the form of a press release on Raw Thrills’ website, which said the following:

The King of VR has arrived!

The first production, which was sold out almost as quickly as was put forward, is officially on its way to its first destinations. Already pipped as a dominant player in the VR sector, this title did not let a global pandemic stop it from flaunting impressively high revenue during its stays at chosen US development test locations and performed with the highest income amongst comparative experiences.

The first time the industry gained confirmation of rumours behind King Kong of Skull Island™ was IAPPA 2019, with looped in-game footage shown on a screen on the BANDAI NAMCO booth. The footage – which has since been refined further – was so compelling that its potential was heeded in spite of the thousands of live playable physical machines amongst it.

Mr Nabil Kassim, CEO of Warehouse of Games (WoG) says “From the moment we saw the preview of the product at IAAPA 2019, we knew we were looking at what is soon to be a top-selling pivotal title in the global market due to its strong license and the gold-standard of its developer and manufacturer Raw Thrills. We went on to show the video product to key customers, in response to which Magic Planet had the foresight to order the product immediately for a number of their locations across the region. It’s gratifying to see the first units have come off the production line and are now on the water soon to be installed and in action.”

Whilst this is tremendously exciting news for WoG and Magic Planet who managed to grab dibs of a large quantity of units from this first batch, there will be some wishing they were a little quicker off the mark. It’s a good thing then that there’s still some availability on the next production that’s due to ship mid-February – as momentum gathers for this production, we’d advise quick responses.

From the array of its many stand-out features, it employs the latest VR technology from HP – the HP Reverb G2. To explain the premise of the game for those in the dark it follows an alterable story from a choice of three chapters, which rely on the success of your reactions during focal slo-mo events to determine your progression throughout the game. Players can compete for the highest scores from previous users and/or simply beat their opponent.

The longevity of King Kong is again enforced with new film Godzilla vs. Kong expected for release this year. Considering he’ll be making a mighty contribution to entertainment venues with this latest Raw Thrills title, you can bet that we’ll be rooting for Kong in that particular showdown.