There’s just something about VR games that we can’t quite put our fingers on. It is a technology that comes, then goes, then comes back again, as developers try and figure out a way to make it work for public arcade use. Some interesting ideas have surfaced on the market since the 1990’s, only to fail due to prohibitive costs and insufficient audience appeal. However, the latest iteration of VR tech in gaming is getting pushed hard by companies and developers, and it seems that virtual reality is here to stay—for now, that is.

Opinions aside, the fact is that VR is now more accessible and perfected than ever. Sure, the technology still has its quirks and kinks that have to be ironed out, and the cheaper headset models definitely leave a lot to be desired. However, when it comes to the most cutting-edge VR solutions, the technology is definitely at a point where it’s actually enjoyable and feels intuitive enough to generate a pleasant experience for the player, and this will only continue to improve as more companies dabble further in developing VR games.

And this is where Raw Thrills’ latest game comes into play.

Now, RT needs no introductions; it’s simply one of the largest modern arcade game manufacturers and developers out there, continually pumping out new games every year. Their latest project, however, definitely captures our interest as it’s the company’s first venture into VR gaming.

There had been rumors circulating since last year that RT would be trying out different VR concepts. However, in IAAPA 2019, the company put those rumors to rest by actually confirming that they were working on a VR game by the name of King Kong of Skull Island and that they would be sharing more information in the upcoming Amusement Expo, which is going down later this week.

Now, while we’re still waiting to catch Raw Thrills’ demo on their latest project, the folks at Arcadeheroes already scored a sneak peek of this game, which comes from a marketing document that the company handed out to distributors and operators to drive interest in the game. Here’s what they found:

While we obviously don’t know anything about the narrative and the story of this game, it’s going to be a cinematic game, unlike some of the most popular VR titles of the moment, which are usually shooters. The cabinet itself is quite high-end, especially when you consider what’s under the hood in terms of specs.

Since it’s a VR game, there’s obviously no need to invest too much in fancy screens and monitors, though this didn’t stop them from installing not only one but two screens in this cabinet. The larger 55” display on the very top of the cabinet is for showing teaser videos and drawing users to the game, while the smaller 43” monitor mounted on the back of the cabinet acts as a dynamic marquee and logo display. The players will be seated with their backs to the monitors, and they will find their VR headsets hanging just above their heads. 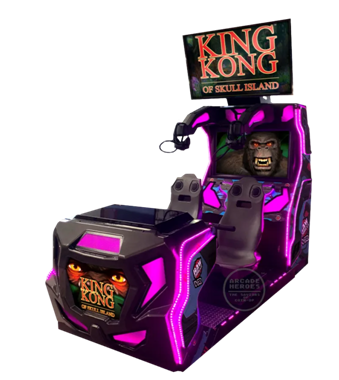 Keep in mind that neither of the two displays will show footage of the players currently engaged in the game. We’re guessing that, since this is a cinematic game, its replayability could be limited, and this is RT’s way of encouraging players to partake in the entire experience for themselves instead of living it through others.

Instead of your typical light gun game, King Kong of Skull Island utilizes Kinect-style VR controls, detecting and using the player’s own hands for providing its gameplay, making this game literally a hands-on experience. The headsets, however, are top of the line as they’re custom HP Reverb HMDs, with modified straps and wiring to survive longer in the ruthless arcade environment. Assuming that the PC can handle it, this headset is capable of producing a 60FPS, 4K3D experience in each eye, and we’re pretty sure that RT will provide a powerful enough system to take full advantage of everything this headset can provide.

King Kong of Skull Island will consist of three chapters, each of around 4 minutes, where the player acts as a driver riding through Skull Island and interacting with the environment in many different ways through the VR controls. Both players will act as the driver in their respective games, though we’re not quite sure how this is going to work. In terms of gameplay, this title will feature lots of simple exploration by taking in the sights, coupled with certain interactive segments in the form of QTEs where the player will have to react quickly to events unfolding on screen. Depending on their performance, they might either clear or fail the QTE.

This game is scheduled for release later this year and, according to unofficial sources, the price will be extremely competitive in relation to similar titles.