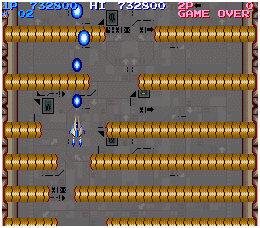 In our previous GG article, we focused on the Konami shoot ‘em up Salamander. We talked about the basics, as well as everything you needed to know to try your hand at defeating Zelos’ forces and stop him from destroying the planet. To do this, you have to take the Vic Viper and shoot your way through the hordes of space enemies, aliens, and other weird enemies in true shoot ‘em up fashion.

This time around, however, we’re going to talk about the stages, as well as give a few tips on what to expect in each of them and how to surpass the obstacles that they will throw your way.

Without further ado, let’s buckle up and get started.

The first stage stays true to its name by taking place inside of what appears to be a huge organism’s body. As a fun fact: some fans theorize that this game is played entirely inside Zelos who, in turn, is the snake that appears in the cover of the box. In this sense, we’re essentially destroying the boss from the inside out. With that being said, expect a bunch of organic enemies and walls in this stage. 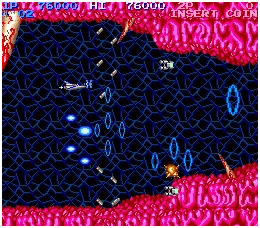 The most dangerous foes in this level are the death hands that emerge from the walls, stretching out to attack your ship. They are joined by the sharp crosses, which are invulnerable fang-like objects that protrude from the roof and ground, and which you must evade in order to progress. Near the end of the stage, you will run into several flesh walls that you must shoot through to pass. Be careful with this part as the walls regrow if you stop shooting and might trap your ship inside.

The first boss of the game is relatively easy and lies immobile until your free it from its fleshy prison. Once you peel off enough of its outer shell, the brain will break free and spawn two indestructible death hands. The only way to hurt this boss is by shooting it in the eye when it opens. The best way to defeat it is by circling around the stage to evade the grasping death hands, and to shoot it in the eye every time your swing by its front. Eventually, it’ll go down.

Are we still inside the big space snake? Is it so large that it can fit an entire asteroid belt inside of it?! 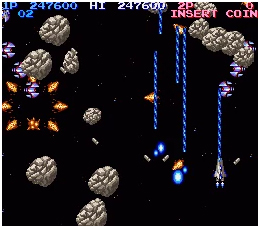 This stage if played in a vertical fashion, traveling up through space while shooting at bad guys and avoiding meteors. The latter is the biggest hazard in this stage, as enemies often take cover behind the floating rocks while they take pot shots at your ship. There’s really nothing special to mention here other than the Fire Geists, which are enemies that explode when you destroy them, and that the explosions can potentially take you out if you get too close. Luckily, there is a limit to the number of explosions that can be on the screen at any given moment, so it’s better to destroy the Fire Geists as fast as possible.

Things are heating up now as the second boss is tough as nails, compared to the first one. Tetran is simple; he is a robotic sphere with 4 tentacles, that moves around the stage in a clockwise fashion. The only way to harm it is by destroying its shields and then shooting at the core in the middle. The best way to go about this is by moving clockwise around the stage, avoiding it, and shooting at it when you get beneath it. Don’t dawdle in place for too long or you’re bound to get hit by a stray tentacle. 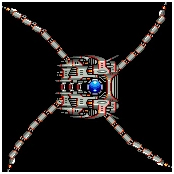 This level is played in a horizontal fashion, much like the first one. However, in contrast to the first stage, it’s played very differently. Be on guard for the constant threat of fire eruptions, for which you must stay in certain positions for as long as possible to avoid them. Try to stay just slightly to the left of the center, while floating about an inch from the bottom or the top of the level. In these positions, you can safely dodge the flame eruptions while also avoiding or destroying any incoming threats. 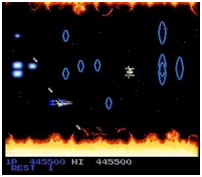 The long serpentine flame dragon is an intimidating boss, but a pushover if you know how to handle it. His main attack consists of a flame breath that’ll scorch you if you don’t avoid. However, his main weakness comes from his own bulk. The dragon is fast, but he can’t turn very well. Moreover, since he always tries to fly straight at you, defeating him is a matter of avoiding his charge and shooting it in the head as it turns around. At some points, he might enclose you within his body by constantly circling around you. If this happens, all you need to do is move with the dragon, and avoiding colliding with its body, while continuing your onslaught on its head. 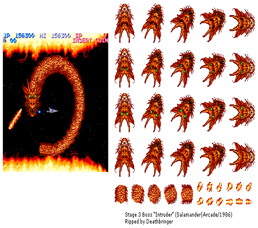 Getting hotter and hotter…

This is another vertical stage that, while easy enough in terms of enemies, you will have to fly across several volcanoes that spit molten rocks at you. At this point, you should be equipped enough to dodge the incoming rocks, while also dispatching any enemies that fly your way. At one point, you’ll reach a fork where you’ll have to choose whether to go left or right. Both paths lead to the same place but, along the way, you will encounter several large boulders that slowly float across the screen. Whatever you do, don’t shoot these boulders as they will fracture into smaller chunks and make dodging the shards all but impossible. Before the boss battle, you will run into a dirt wall similar to the flesh wall in the first level. You will have to blast your way through to pass and reach the boss chamber. 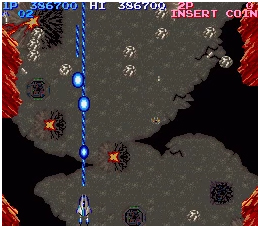 This is either the hardest or easiest boss in the game, depending on how you look at it. We’ll only explain the easy method though. The boss consists of three blue cores protected by weak shields. Their only method of hurting you is by launching blue orbs that bounce around the screen ad infinitum. However, if you stay on the lower right corner of the screen, these orbs will never touch you, and all you have to do is wait it out. After a while of sitting there, the boss will self destruct, giving you an easy win. 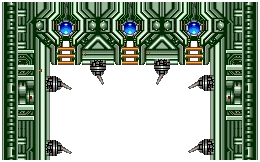 You know this one is tough because it has “hell” in its name. This level is similar to the first asteroid belt, but tougher since it features different enemy configurations that you will need to prepare for.

The first enemy config is the phalanx, which are highly armored foes that take a lot of hits to go down. You’ll need to zip back and forth the screen to dodge them while also avoiding their missiles. Furthermore, they explode when they die, so be careful when you destroy these foes. Meanwhile, you’ll have to continue dodging asteroids, just like in the second level. However, it is when these asteroids disappear that the real stage begins. 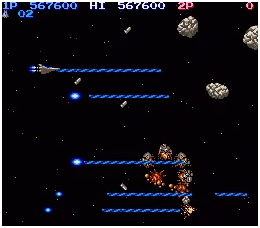 After defeating the phalanx and surviving the onslaught of asteroids, the stage will clear, and you’ll have to battle against the Zabu Mark II. These enemies appear out of thin air and surround your ship. They first appear in formations of 8 ships, and then in a final configuration of 16 ships. To dodge and survive their attack, you will need to shoot straight ahead to punch a hole in their formation and then to slip out of the kill zone. After dealing with these minibosses, you will have to fight a few standard enemies before the boss of the stage.

This boss is cheap!

Not only does he arrive unannounced, but he does so from the bottom left of the screen. If you’re not prepared for his arrival, he will ram into you and take a life. Other than that, he’s easy enough to beat. He attacks in two manners: by deploying an attack ship that can be easily dispatched, and by shooting blue orbs just like the previous boss. To beat him, you will need to destroy his shields, and then shoot his core enough times. When you destroy the shield, it will no longer deploy attack ships, but he’ll launch his orbs at an accelerated pace. Nevertheless, he’ll eventually go down after taking enough damage.

This is it, the final stage.

It starts off like any other, in space while facing a group of weak ships. The stage itself begins once you reach terrain, in which you will encounter two new hazards. One of these is a crystal bomb that streaks towards you shooting projectiles, and that can be taken down with a few hits. The others are pink bursts that sprout from the ground and must be avoided entirely.

After a few moments, you will come up to a new terrain, which resembles a metal fortress. This new zone appears alongside a music change that’s reminiscent of Gradius. In this new area, you will have to fight against 3 core bosses back to back. They can be easily dispatched by staying at the top of the screen—where they can’t hit you—and letting your options deal with them. Once you destroy the third core, fly back down to the bottom of the screen to avoid the incoming enemies.

As you head deeper into the fortress, you will have to deal with new hazards, such as floor tiles that rise from the ground and fly at you, turrets, and other nasties. However, in another Gradius reference, you will eventually face against several Moai enemies which shoot projectiles out of their mouths. While you can dodge most of them, there are two who will put up quite a fight. Their only weak spot is shooting in the mouth, which can be tricky since they also attack from this part. Once they’re gone, the way to the final boss will be clear.

The last boss in the game is as treacherous as the previous one. It appears from the bottom of the screen without notice, floats to the top, and then locks into place trying to ram you all the time. The boss itself is quite simple: all you need to do is break the locks that keep it in place and that are located on the boss’ sides. After breaking the locks, Zelos will fall down to its death, which marks the beginning of the final part of the game: escaping the fortress before it self-destructs. 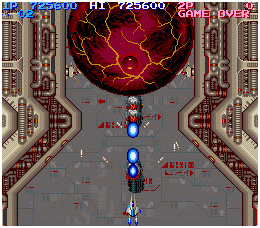 This last part is tough and frantic and consists of flying upwards at breakneck speeds while tearing down the barriers that block your way. The barriers appear from the sides and shut down to the point of blocking your path entirely unless you manage to punch a hole through them. Nevertheless, unless you memorize the pattern of the barriers, you will most likely lose several lives in this last part. Luckily, it can easily be cheesed if you have enough extra lives, so don’t worry about it.

After you escape, give yourself a pat on the back and brace yourself for another playthrough. But this time, it’s in a much higher difficulty!

The Japanese Arcade Game That Caused Controversy in the East