In the first part of our guide on Punch-Out!, we went over the basic premise of the game, which is to defeat your opponents in the ring to win the big prize. Like with all old-timey arcade games, the plot here is just an excuse to get you to trade fists against the computer and, just like the arcade games of yore, the controls are easy to execute, yet difficult to master.

Nevertheless, with this guide, you’ll learn exactly what you need to do to up your game, and wipe the floor with the opponents that stand in your way. Before long, you’ll be going up against Mr. Sandman and claiming that championship belt for yourself. However, will you be able to hold on to your title for long enough to set a high score? If you read on, you just might!

We already talked about the first fight in part 1, so let’s move on to the second contender, Piston Hurricane. Don’t be fooled by his goofy appearance, this guy doesn’t use the word “Piston” in his name for free!

The Hurricane is a heavy hitter, which is balanced out by his lackluster defenses. He frequently leaves himself exposed to body punches, especially after he attacks. Furthermore, he has a tendency of trying to dodge jabs to his face, leaving himself even more open to body shots. However, he lives up to his nickname when he executes his hurricane rush, which is a flurry of lows and highs, topped up with a massive uppercut. Luckily, this move is very telegraphed and easy to block. However, you’d do well to block, and only block, as you’ll get punished if you dodge. 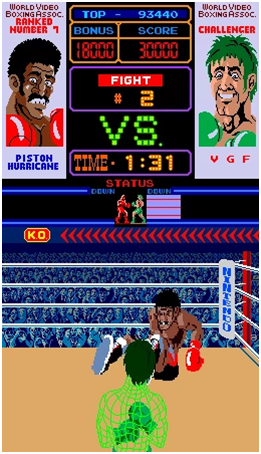 Nevertheless, his main weakness is precisely his strongest move. Whenever he’s winding up his hurricane rush, he performs a jump away from you, and then another back to the center, after which he’ll launch his flurry. This is where timing is everything – if you land a jab on his body right as he returns to the center, you will knock him out in one hit, regardless of his remaining HP.

Keep in mind that every time you knock him down, Piston will get up with an uppercut. Use that knowledge to easily dodge and counter with a jab to open him up and continue to pummel him.

Piston lives up to his name even more now. He becomes unpredictable, harder to read, the whole nine yards.

He still keeps his main weakness, which is his hurricane rush. However, he covers it up by jumping a couple of times before rushing you, which can be difficult to time correctly if you’re aiming for the 1-hit KO. His rush now lasts for longer as he unloads a flurry of punches, and tops them off with two swift uppercuts at the end, with no telegraph. Nevertheless, once you get the timing down, you can easily fit a left jab between each of his rush punches to interrupt them all and get out of his move unscathed.

We reach the middle of the game with Bald Bull, which is also when the game starts to get harder as you can’t exploit large weaknesses or stunlocks anymore.

Bald Bull seldom leaves himself open to attack and counters most of your moves after blocking or dodging them. You can use this to your advantage since one of his main weaknesses are his counterattacks. If you can throw a punch that he’ll dodge or counter, you can dodge his counter move and respond with your own well-placed punch.

Nevertheless, his largest opening is when he performs his main move, the Bull Charge. This attack is very dangerous as he will instantly knock you down if it hits. However, just like the second match against Piston Hurricane, Bald Bull telegraphs his signature move with two quick hops before launching at you. If you can time a jab just after the second hop, you can actually knock him out of his attack, and throw him onto the mat, entirely. Otherwise, if you can’t get the timing right, or don’t want to risk it, you can also dodge his charge, and then counter with a swift jab.

The title defense match against Bald Bull isn’t difficult. He telegraphs more than ever and leaves himself to counterattacks after launching his own moves. Just like the first match, he will use his Bull Charge, but with a slight difference. This time, instead of hopping twice, he might do a back hop before jumping forward, followed by his charge. If you want to land the 1-hit KO, you’ll have to time your jab for exactly when he jumps forward, before he initiates his charge.

Bald Bull becomes much more predictable when you fill up your KO meter. He’ll begin to jab and uppercut you nonstop. The opening here is after he launches one of the latter, which you’ll dodge and counter with your own jab, followed by a right hook. He might also launch a series of 3 jabs, with the last one after a slight delay. If you can time a right hook just before the third jab, you can knock him out of the combo.

This one is a doozy; not because he’s tough, not because he hits hard and not because he’s a damage sponge. No, he’s difficult because his defense is air-tight, and landing a hit on him is an uphill battle. He’s so good at blocking that you’ll constantly risk running down the clock and losing the match.

Kid Quick doesn’t appear in the title defense, so you’ll only have to beat him once, which is easier said than done. He frequently leaves himself open to body blows, but this isn’t his real weak point. Body blows are a way of getting a few extra hits in since you’ll rarely be allowed to land more than a few at any given time. However, he is weakest against counterattacks in the sense that, after dodging his hook, he leaves himself open to several jabs. Even when he’s not stunned, you can continue to jab him until he starts to retaliate against your punches, which is a sign that you should stop throwing blows, and wait until he does something else.

The reason why you should spam the left jab with reckless abandon after dodging his hooks is so that you can fill your KO meter quickly. If you’re lucky, you can land enough jabs to fill it early on for a quick knockout. If you knock him out fast enough, he might not even get back up, forfeiting the match.

A good way to speed this match is by throwing a right punch to his face, which he’ll always retaliate with a hook. After dodging to the right, you can counter with 2 left jabs, followed by another right to the face, the latter of which he’ll dodge and counter with his hook. If you repeat this cycle, you can essentially cheese him to death. Good riddance.

This guy must work as an Italian chef whenever he’s not boxing. I mean, look at that name!

Don’t be fooled by his benign nickname, though, as this is one of toughest nuts to crack in the game and a good warmup for the title fight against Mr. Sandman.

The standard gameplay against Pizza Pasta is pretty straightforward. Bait his hook with your left jab, dodge them, and punish him. Sometimes, he’ll dodge your jab and retaliate with an uppercut, which you must dodge and counter with more jabs. Pretty easy stuff.

However, this guy truly shines when he launches his signature move, which paralyzes you and makes you think fast to react against his incoming punch. Luckily, the move isn’t hard to dodge as long as you’re holding right to dodge his ensuing uppercut. After you successfully avoid his move, you are free to rain some jabs upon him, refilling your KO meter and setting you up for a crushing knockout punch. Repeat this pattern to make short work of this carbohydrate menace.

Nothing much to say here as he isn’t much different in the title defense match. His timing becomes a bit more erratic. Keep your eyes peeled and you shouldn’t have trouble against this guy.

Oh boy; the championship match. This is the event that the game has been preparing you for all this time.

Surprisingly enough, this guy fights just like Pizza Pasta and has the same weaknesses, to boot. However, he hits much harder and can learn from your moves. In this sense, you can’t exploit the same tactics to break his defenses and expect them to work every time.

This is a battle of attrition, as Mr. Sandman is both smart and tough, and you won’t be able to land many hits in a row, especially when he learns how to block your counter punches. Luckily, his intelligence seems to reset whenever one of you hits the mat, so you can try to bait his uppercut, dodge, and then counterattack, once or twice at the beginning, and again after every time after you knock him down.

Keep this up for long enough and you’ll claim the belt in no time flat.

This is the place where most perfect or high-score runs go to die. This fight boils down to luck as Mr. Sandman is unrelenting in his efforts to win back his belt.

This time around, however, he’s vulnerable to knockout punches. His primary attacks consist of a 3-jab combo, which you can interrupt after dodging the first, and countering with your own right after a slight delay. Once you’ve countered, you may follow up with more rights, as well as some hooks. Don’t be afraid to hit the mat if this guy decides to go turbo on you; you’re really at the mercy of the computer in this fight, so take your loss like a champ if it decides that you’re done for the day.

That’s it for our guide on Punch-Out! Use the knowledge contained in this guide to defeat every single opponent, and claim the championship belt for yourself.

Getting Good: Punch Out! Pt. 1