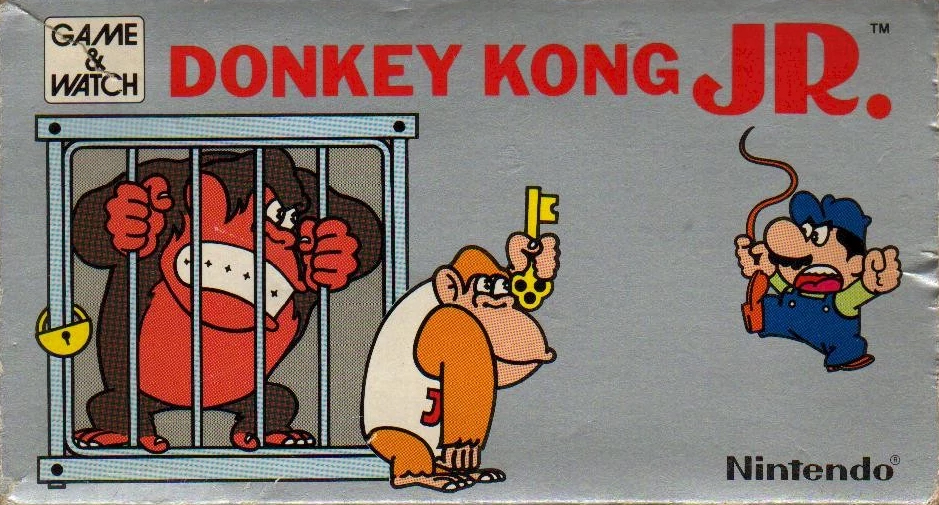 Donkey Kong Jr. was groundbreaking back when it came out in 1982, though not for the reasons most might assume. The game itself, despite offering entertaining mechanics, brought no new elements to the table. However, in a time where arcade and home console games were more about obtaining high scores and earning bragging rights, Donkey Kong and Donkey Kong Jr. proved to the world that games can tell stories and that they are more than just their interactive elements. Through these games, Shigeru Miyamoto (their creator) showed that an ongoing rivalry between the protagonists can be explored through both gameplay elements, as well as the smart use of cutscenes.

In this sense, Donkey Kong Jr. is more of spiritual successor to Donkey Kong, since its plot is located after the events of the first game, but the roles of the characters have switched. This time around, Mario is the bad guy, and the player takes control of Jr. Donkey Kong’s son. After rescuing his girlfriend, Pauline, Mario locked Donkey Kong in a cage. It is unknown what the plumber is planning to do with his arch-nemesis, but it certainly can’t be good. This is where Jr. comes in. He must climb to the top of every stage, similar to what Mario did in the last game, so that he can finally reach his dad’s cage, and free him once and for all.

Donkey Kong Jr. plays similar to the previous installment. The joystick controls Jr’s movement; left or right makes him run in the appropriate direction, while up and down makes him vines and ladders. The jump button can be used for just that. If combining the jump with a direction, Jr. will perform a running jump towards the respective direction.

Just like in the previous game, there are a number of characters and enemies featured in Donkey Kong Jr. 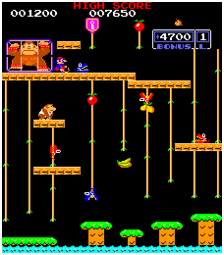 The first stage of the game consists of a few platforms connected by vines, which can be climbed by Jr. to make his way towards his father. The key here is to make smart use of the first three vines directly above you in order to successfully climb down onto the tree top that is located directly to the right, far above jumping distance. You must carefully climb the vines, and jump across from one to the other until you reach the fourth vine from the right. Be careful to jump over or move away from any Snapjaw careening towards you. When you have the chance, make your way over to the right-most vines, and climb onto the top platform. Once there, simply jump over the Snapjaw and make another jump towards the key, ending the stage. 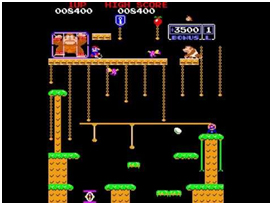 This stage gets its name from the very obvious springboard located directly to the right of where you appear. Traditionally, the springboard is used to land on the small moving platform. However, if timed just right, you can press the jump button as soon as you hit the springboard for an extra boost, and a shot at reaching the left pulley, from which you may hang and climb up. The rest of the stage consists of climbing onto the big platform in the middle and quickly clinging onto the chains on the left. After climbing to the top, you’re free to make your way to the right, across the chains, while dodging the small nitpickers. Once you reach the right-most chain, climb up, jump over a nitpicker or two, and grab the key. 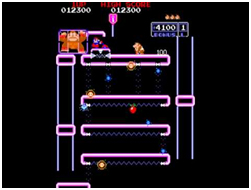 The key (no pun intended) to beating this stage is to keep a close eye on the blue sparks. The red sparks are predictable; they always follow their circuits no matter what, so you can easily jump over them. The blue sparks, on the other hand, are unpredictable: they can originate from any of the 4 power outlets above and can travel either to the left or to the right. Furthermore, once they reach the interrupted parts of each circuit, they drop down onto the lower levels. Nevertheless, if you focus and manage to jump over the sparks (while paying attention not to jump onto the sparks on the upper level), you’ll reach the key in no time. 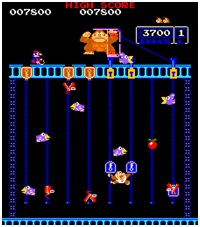 Mario pulls out all the stops on the last stage. On the very top of the stage, we can spy Donkey Kong’s cage, as well as 5 locks that must be opened before he can break free. The objective of this stage is to climb the chains and bring the keys up to each lock. Once opened, the keys disappear, and the player may continue onto the other locks. If you are unable to complete the climb in a single go, the key stays on the point where you left it, so you can continue from where you left off. The four middle keys can be pushed up two at a time by clinging to two chains. However, this must be approached with caution, as Jr. will be subjected to twice the dangers, considering that there are Snapjaws on nearly every chain.

This last stage is tricky but is less hectic than Mario’s Hideout. Keep calm, and don’t rush it. The Snapjaws climb down the chains faster than they can go up. A good idea is to push the keys halfway while they Snapjaws are climbing, getting out of the way when they come back down, and pushing the keys the rest of the way as the Snapjaws make their way back up.

Once you open every lock, Donkey Kong will bust out of the cage, and Jr. will catch, after which both will exit stage right, but not before giving Mario a good kick for all the troubles he put them through.

Taito Taking Light Gun Games to the Next Level