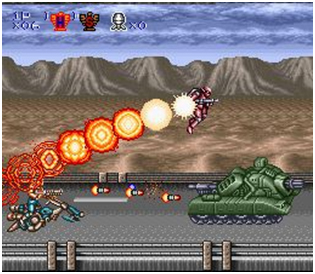 Back in November on Getting Good, we talked about the basic elements of the popular run n’ gun title, Contra 3 for the SNES. In that occasion, we went over the different types of weapons and their applications, as well as many tips and strategies on how to complete the first 3 stages. This time, we aim to complete our guide by showing you, our faithful readers, how to get good and pass the last 3 levels, finish the game, and save futuristic Earth from the evil Red Falcon once and for all!

On this stage, you will be riding a motorcycle throughout roughly half of its duration. It can scoot left or right to dodge projectiles, but won’t be able to stop, so the player must keep this in mind when planning his movements.

The stage begins with several enemies dropping bombs at the player. Luckily, they can be easily dispatched with a few shots. The stage continues until exiting the tunnel, and after that, the first miniboss, Battle Tank, will appear. This one is easily dealt with by staying in the back, and only jumping to dodge projectiles. After several generous helpings of lead, it’ll eventually explode and the way will be clear for the player to continue.

After some uneventful riding, the alien mothership will fly by, assailing the player with its armaments. In this part, the stage stops scrolling and the player must concentrate on dodging everything the mothership throws at him. At points, he will have to shoot turrets or enemies to ensure safe passage, while in others he will simply have to time his movements right to dodge the armaments that can’t be destroyed.

After surviving the mothership’s onslaught, the second miniboss will appear. Tetrandakker is its name, and it can be dealt with by, similar to the Battle Tank, staying all the way to the left of the screen and firing at the boss whenever an opening appears. The main difference that this enemy has compared to the Battle Tank is that he’ll sometimes jump at the player, giving him a chance to scoot under it and get a few shots in. Other than that, the enemy can be defeated simply by firing at it until it blows up.

Shortly after the miniboss is defeated, a helicopter will arrive to pick up the player, prompting him to jump from his bike on the hang on the side of the flying vehicle. While hanging there, the third miniboss will appear; a humanoid alien called Slash, hanging from the bottom of the helicopter with his retractable arm. The player must avoid getting too close to the enemy or else risk getting slashed by the boss’ sword. At times, Slash will retract his arm to get closer to the player and then throw a ninja star at him. The player must jump to avoid the projectile, and keep firing while dodging the boss. After a while, it’ll go down, and the way forward will be unlocked.

After a few seconds, the player will be up against the final boss of the stage, the mothership. This time, he’ll have to dodge the ship’s missiles while firing on the upper and lower nodes to destroy its shield. After the shield is destroyed, the only thing left is to focus fire on the core until the ship is utterly destroyed, marking the end of stage 4. 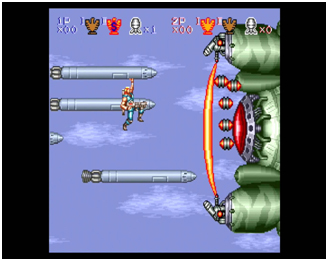 Stage 5: Nesting in the Sands

This stage is very similar to the second one we explained our previous article. It’s played from a top-down perspective and the objective is to destroy all the enemy bases before the showdown with the stage’s boss. The player has to be careful as it is very easy to fall off the sides of the stage. Furthermore, the spinners that are near each enemy base can disorient him or her if not using the L or R buttons to stabilize the camera and compensate for the spinning.

After all the enemy bases have been dealt with, the player will fight against Scorpellum which, unfortunately, turns out to be one of the hardest bosses in the game. The fight is simple enough; it just takes a lot of practice to get down the pattern and avoid dying while dealing maximum damage to the boss. There will be several spinners in the arena, which can complicate the fight if not using R or L to compensate and stabilize the camera. The boss itself has only 2 moves, a flamethrower, and a tail attack, both of which can be avoided fairly easily. The challenge comes from the necessity to stabilize the camera because of the spinners, while also being able to shoot directly into the boss’ weak point to destroy it in a timely manner. 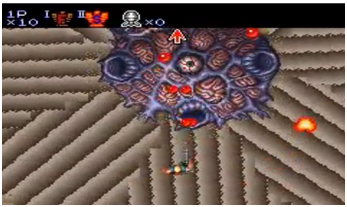 The last stage of the game is, understandably, the hardest and most challenging one of them all. In this level, the player will go up against several final bosses of previous Contra games, with the main difference that this time they’ve been demoted to miniboss status, before taking on the game’s final boss.

Between minibosses, the player will have to dodge projectiles and kill fast-moving grunts, taking care not to waste lives, as he’ll need each and every one of them for the final boss. Shortly after the start of the stage, the player will have to deal with Para-Slug and alien that hangs from the wall. After easily dispatching this one, he must continue to the right, dodging projectiles and killing enemies until coming up to the first miniboss, Gomeramos. 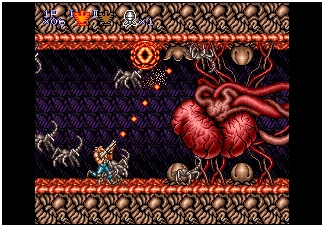 This one is the final boss from the first Contra game, and it’s even easier this time around. The player must each of the 4 sacs before focusing on the heart itself. After a few moments, he’ll go down and the way forward will be open. After taking a few steps to the right, the second miniboss will rise from the ground.

This Kimkoh is the final boss of Super C, another Contra game. After digging itself out of the ground, it’ll charge at the player, and then jump back. After it lands, the player must jump its leg and focus fire on the head while it remains visible. After a while, the boss will shoot several globs of brown projectiles that will rain down on the player moments after. A good strategy here is to pause the game as the projectiles are falling so that the player can identify the safe spots, and unpause it when he’s ready to make the move. After the globs fall, the fight will the repeat. After some time shooting at the head, the boss will die.

After some platforming, the player will arrive at a vertical climb. In this part, he will be confronted by the third and final miniboss of the game, the Metal Alien. Just like the first miniboss of stage 2, this boss attacks by trying to slam into the player. He must dodge the enemy’s advances while dealing damage when possible. When enough pain has been dealt, the boss will switch its strategies. Instead of charging towards him, the boss will teleport close and try to hit the player with its tail. The key here is to never stop moving in order to avoid the attack. After a while, the boss will explode, and the path to the final enemy will be open. 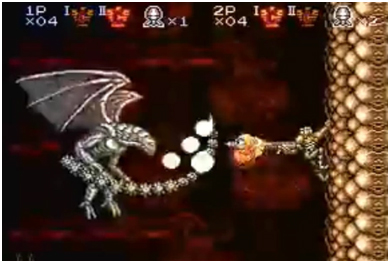 Jagger Froid, as the last boss is called, can be a really tough fight if players don’t know what to expect. The first phase consists of attacking the arms and head of the boss while dodging the enemies he spits from his mouth. In this part, the player must destroy one of the arms as fast as possible to avoid getting killed when they extend outwards. Afterwards, he must focus fire on the head, taking care to quickly destroy the enemies the boss spits out to avoid being overwhelmed. After a short and uneventful bout, the boss explodes, revealing its brain and marking the beginning of the real fight. 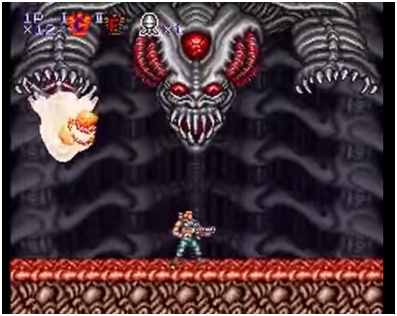 In this phase, the brain itself is untouchable. Instead, the player must shoot one of the spinning orbs to determine which mechanic will be triggered. There are 8 balls in total, and each of them will activate a different mechanic that the player will have to dodge while finding a way to score a few hits on the brain before it teleports back to the center and the game of roulette repeats. This fight can either be very tough or very easy depending on the orbs the player obtains, as some mechanics are very easy to avoid, while others are nigh-impossible without the right gear. Here is a list of the orbs and the effects they trigger:

After enough damage has been done to the brain, it will fall to the ground and explode. Depending on the difficulty level, one of two things may happen: The player may get picked up by a chopper, prompting the end of the stage and the game. However, on the hardest difficulty, after the player is picked up by the helicopter, the brain will get encased in a special armor and, in a last attempt to defeat the player, will chase the helicopter as they make their getaway. Defeating the brain here is as easy as jumping to avoid getting tackled by the brain, and constantly firing at its core. After a short while, it will explode, marking the end of the game, and presenting the player with a well-deserved cutscene and credits screen.

The Guide for the Easy Financing of Your Arcade Games